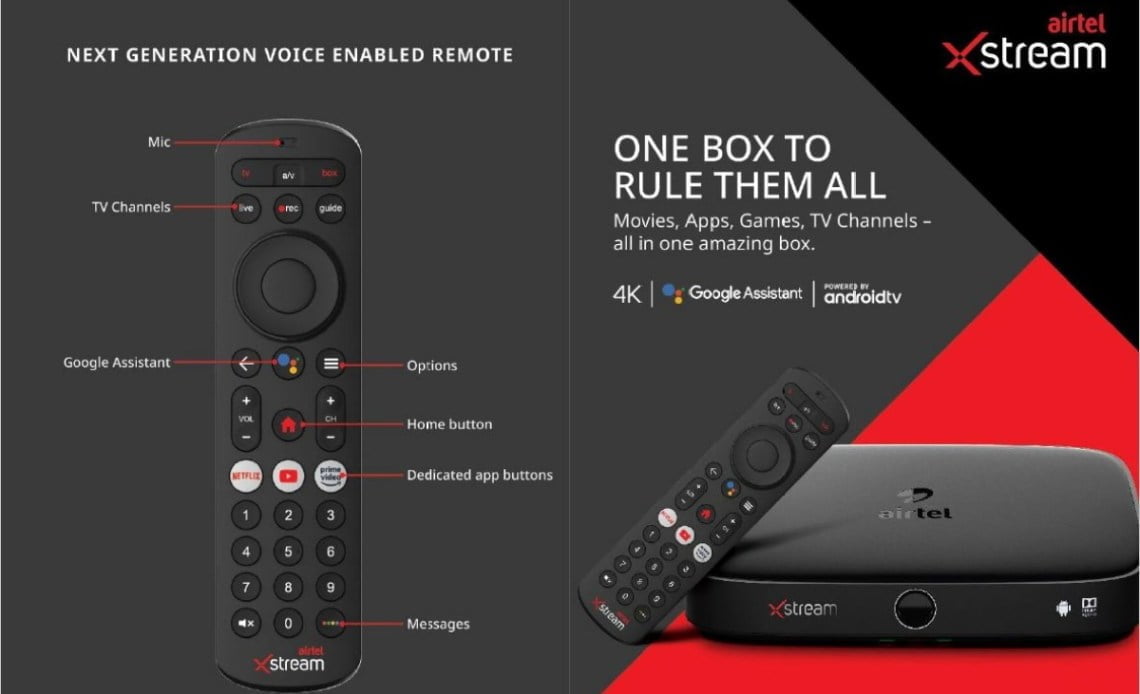 Just a few days before the launch of Jio Fiber, Airtel has brought its competitor in market by launching its all-new Xstream Box and Xstream Smart Stick today at an event held in New Delhi. DreamDTH was first to report about both Airtel’s Xstream Box and Xstream Smart Stick. Both of them are launched with the same specifications and features which were reported by us.

The Airtel Xstream smart box is manufactured by Technicolor. It comes with a smart voice support remote and runs on Android 9 Pie OS. It has a quad-core CPU clocked at 1.8Ghz, paired with Broadcom VideoCore V HW (V3D-510) GPU. It also have 2GB of RAM and 8GB of storage. The smart box is capable of broadcasting DTH, IPTV and OTT content. This smart box supports 4K and can be used as a gamepad also. It have more than 5,000 TV apps to install and use.

The Airtel Xstream smart box is priced at Rs. 3,999 and comes with a complimentary one-year subscription worth Rs 999 to all the Xstream app content. Customers will also get free Mega HD DTH pack worth Rs 699, TV Games from Airtel and free Netflix subscription for one month worth Rs 500. Existing Airtel Digital TV customers can upgrade to Xstream smart box at a price of Rs 2,249. The set-top-box will be available to purchase online within a week via Airtel.in, Flipkart and Amazon.

Airtel Xstream Smart Stick is manufactured by Skyworth and can be inserted in an HDMI port just like Fire TV stick. It is running on Android 8.0 and powered by HiSilicon Hi3798M V300 SoC clocked at 1.6Ghz processor with ARM Mali-450 as its GPU.It has 1 GB RAM with a storage of 8 GB. This Smart stick will take power independently from the power source. It has Chromecast support to play the content on a big screen. The remote of this Xstream Smart Stick is having a dedicated Google Assistant button with a microphone to search for your favourite shows easily just by voice.

Airtel is providing subscriptions to Eros Now, HOOQ, Hoichoi, ALTBalaji and Hungama through Airtel Xstream app while the subscription to Zee5 will be provided separately and users have to use Zee5 app to access its content. With one Airtel Xstream subscription users can connect and use up to 3 Xstream Smart Sticks.

Airtel Xstream stick is also priced at Rs 3,999. Airtel Thanks Platinum and Gold customers will get complimentary access to content subscription plan on Airtel Xstream stick. Other customers get free access to the content for the first 30 days and will need to subscribe to a Rs 999 annual plan. Xstream Plans can be selected easily through the Xstream app, without that plan no content can be accessed on the Smart Stick.