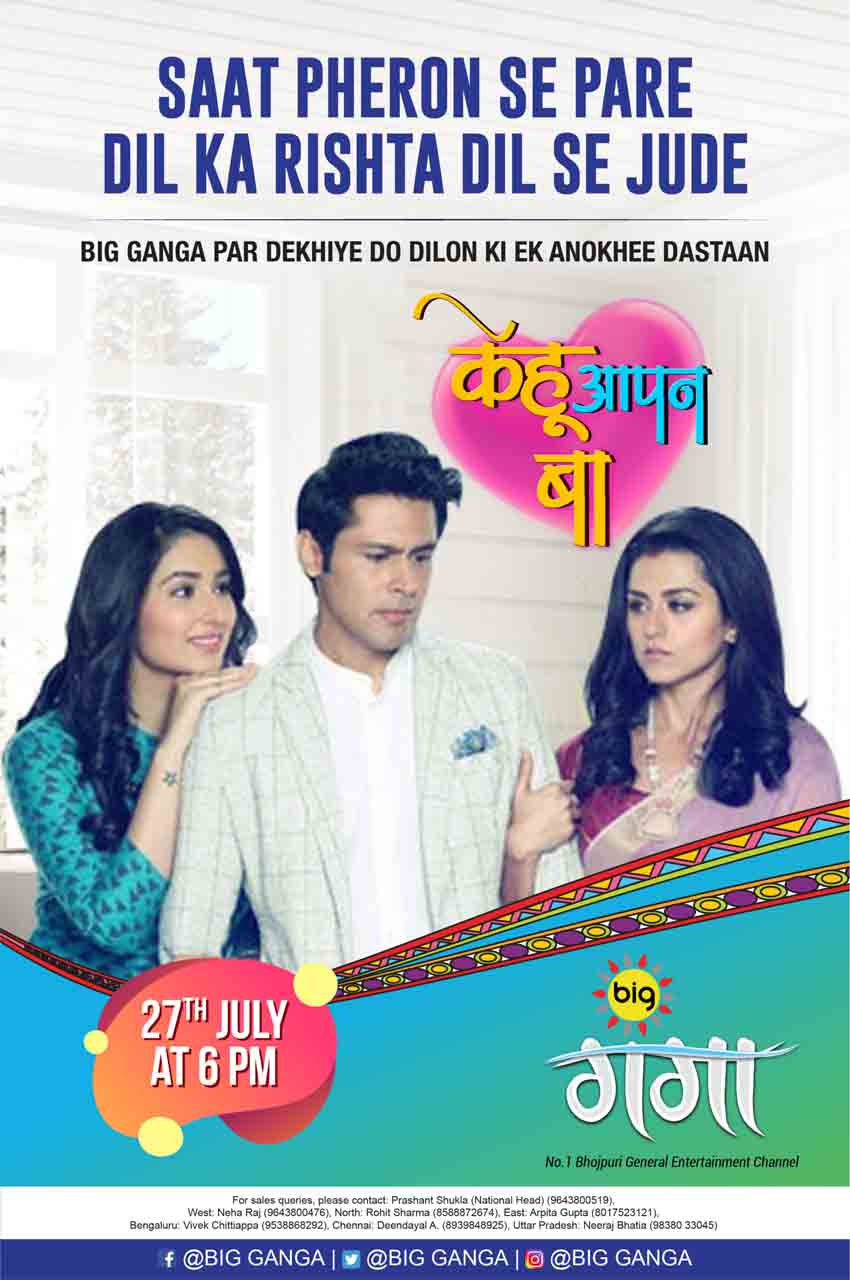 Zee Entertainment Enterprise Limited’s (ZEEL) No. 1 Bhojpuri General Entertainment Channel in Bihar, Jharkhand, and Purvanchal, Big Ganga is adding a new show in its offerings for the Bhojpuri-speaking audience. The channel is all set to launch one of the most popular shows of ZEE TV – ‘Woh Apna Sa’ as ‘Kehu Aapan Ba’ with dubbing in Bhojpuri. This show is starting from July 27 and will be aired every Monday to Saturday at 6:00 pm.

Offering viewers the best of both worlds in the form of drama and romance, the high octane show, based in Mumbai, is filled with layers of twists and turns which will make viewers glued to their seats throughout. Woh Apna Sa consists of 391 episodes, it originally aired on Zee TV from January 23, 2017, to July 20, 2018.

It’s the story of Aditya Jindal who is in a troubled marriage with Nisha Verma with whom he has two daughters. Nisha, on the other hand, is nothing but selfish, evil and self-centred who can go to any extent for her benefit including putting her daughters in danger.

Since this side of Nisha is a well-guarded secret, Aditya’s family thinks highly of Nisha leaving him with no choice but to stay with her. The turmoil in Aditya’s life ends when the protagonist Jhanvi Agrawal enters and changes his life for good as they both expose Nisha’s true colours. But the problems don’t stop here for Aditya and Jhanvi as they have to tackle many challenges, the biggest one being Nisha.

The romantic drama featuring talented actors like Disha Parmar, Sudeep Sahir and Riddhi Dogra, was a huge hit on Zee TV and Big Ganga aims to repeat the same success in the Bhojpuri-speaking market as well.

Speaking about the offering, Samrat Ghosh, Cluster Head East, ZEEL said, “The demand of Bhojpuri content has constantly been increasing where people are in the lookout for local, relatable content in their native language. BIG Ganga, being the pioneer in the Bhojpuri entertainment industry, understands the pulse of its viewers and brings content to their doorsteps after understanding their demands and preferences.”

“Making sure our audience get the same quality of content as HSM viewers, a lot of research is involved in deciding on the syndicated content that is further tweaked according to the overall presentation and language that our audience would prefer. With the channel having a strong foothold in the region, curating such a popular show in a language that connects with our viewers also provides a great platform for advertisers and stakeholders alike, to reach out to the audience,” he added.

Amarpreet Singh Saini, Business Head, BIG Ganga and ZEE Biskope said, “With prime time being a prominent family-viewing time slot, we strive to curate family-oriented shows that can be watched and enjoyed by the entire household. Our prime time offerings are specially made keeping this in mind and by adding a new show to our bouquet will provide them a heavy dose of entertainment as well as strengthen our prime time band as well. Through Kehu Aapan Ba, we aim to end the month on a memorable note and give audience an interesting show to look forward to.”

These new Bhojpuri shows will entertain audiences with its unique content and placement, thereby making the channel an apt prime time viewing choice for the entire family. Big Ganga says that it has more shows in the pipeline to redefine entertainment and original content for its regional audience.