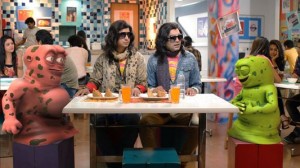 Bollywood music channel 9XM’s funny
duo Bade and Chhote, and Cadbury 5 Star’s
Ramesh and Suresh have come together in a
unique brand campaign that will see the four
characters interacting with each other.

The deal between the channel and advertiser is
for one month and the first set of advertisements
featuring the characters have been put on air on
the channel.

The ad sees Bade and Chhote indulge in their
quintessential ‘Bakwaas’ humour as Ramesh and
Suresh ‘get lost’, thanks to 5 Star.

It is a two-episode campaign wherein the basic
plot revolves around Bade-Chhote chilling out
with Ramesh and Suresh in a canteen and
indulging in the usual banter and the
quintessential ‘Bakwaas Band Kar’ humour. The
campaign showcases the two jodis getting lost in
their own world after chewing on Cadburys 5
Star, thus highlighting the essence of ‘Jo Khaaye
Kho Jaaye’.

Yeah very Nice Ad & Thanks for the Share dinesh bhai.