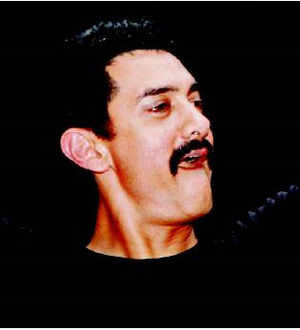 MUMBAI: You could dub it as another young versus old debate. Or you could play it as an expensive and risky film outdoing another with a lower budget. You could also bluntly call it the Amitabh-Aamir face-off. Even the suggestion of such a confrontation may be contentious to die-hard Bachchan fans, but the results of India's rapidly changing demographics are evident at the box office.

The battle lines were drawn and the inevitability of the Amitabh-Aamir comparisons sealed when both flicks released on the same day- July 3. The crucial 'opening' (weekend collections), as the film trade calls it, is the yardstick for measuring success and in this case, it was even more keenly watched than usual. The Aamir Khan-produced Delhi Belly , an adult-certified comic caper, aimed at the right side of India's population came up trumps, finishing the opening weekend with a Rs 26-crore net from domestic screens and adding another Rs 6.7 crore from overseas.

Bbuddah Hoga Tera Baap (BHTB), produced by AB Corp, reported a domestic weekend of Rs 7.5 crore net and an overseas weekend of Rs 2.25 crore. Within nearly a week post the release, DB has grown by Thursday to a total domestic net collection of over Rs 46 crore and an overseas collection of Rs 9.8 crore. Bbuddah, on the other hand, has collected Rs 11.5 crore net domestically and another Rs 4 crore net overseas.

The third contender -- also aimed at younger viewers -- Transformers-III, which released last weekend, earned Rs 12.5 crore net (opening weekend) with paid previews and 3D collections playing a big part. For Reliance Mediaworks CEO, Anil Arjun, this was an interesting week because all three releases catered to three distinct content genres. According to figures from Big Cinemas - India's largest multiplex chain which runs 250 screens -- 53% of its week's contribution came from Delhi Belly, followed by Transformers with 18% and BHTB with 14%.

The numbers, by the way, were fiercely contested. Abhishek Bachchan got into a twitter 'war' with a film critic over a difference in the production numbers he gave on BHTB. He corrected it to say it was only Rs 10 crore, while the critic insisted that he had got the numbers from the Studio which co-produced the film. Meanwhile senior Bachchan put up links on his blog to a website (ibose Network .com), which reported exactly the opposite of other trade sources, claiming that DB had only opened well in certain places. Such drama is expected in Bollywood, even more so when the stakes are high.

The Big B had tweeted that if BHTB worked, he would have a solo hit after two decades. Khan conceded that he was `scared' because of the risque content of DB, adding that he could possibly be risking everything he had built over a decade if the audience rejected the film. Of course, with some clever marketing, he cheekily included the same 'fear' into the pre-release promos as well!
http://economictimes.indiatimes.com/news/news-by-industry/media/entertainment-/entertainment/aamir-khans-delhi-belly-beats-amitabh-bachchans-bbuddah-in-box-office-battle/articleshow/9157995.cms