Bajirao Mastani'is anUpcomingtv Serial onSony Tv channel.It is.ambitious 100 crore project will be helmed bySphere Originsand creatively produced byNilanjana Purkayasstha'scompanyInvictus TMediaworks.TV show based on Bajirao Mastani will be airing on two channels -Sonyand&TV.'Sony Tv'Channel  is already running some successful tv show indifferent genre likeSankatMochan Mahabali Hanuman,Suryaputra Karn  in mytho Genre.  CID andCrime Petroltv show in thriller Genre.Parvarish season -2andKuch Rang Pyar Ke Aise Bhitv serial in Drama Genre.Story/Plot WikiIn the early 18th century, the court of Maratha Chhatrapati Shahu fromSatara Empire a new Peshwa, the equivalent of a modern-day prime minister. In spite of Shripad Rao's  self-nomination as the Pant Pratinidhi, Ambaji Pant chooses to nominate a young Bajirao . To test his spiritual wisdom and knowledgeof weaponry, Shripad challenges Bajirao to split a peacock feather with an arrow. Bajirao succeeds and is given the title of Shrimant Peshwa.Ten years later, his wife Kashibai  isvisited by her widowed friend Bhanu, whose husband was accused of spying on Bajirao and hence was executed. She bitterly forebodes that just like she longs for her husband, Kashi, too, will yearn for Bajirao.‘Bajirao Mastani’ Serial on Sony Tv Plot Wiki,Cast,Promo,Title Song,Timing,ImagesWhile traveling to Sironja, an emissary from Bundelkhand infiltrates Bajirao's tent and demands his help in fighting invaders.She reveals herself to be Mastani , the daughter of the Rajput King Chhatrasal  and his Persian queen, Ruhani Bai. Impressed by her skills as a warrior, Bajirao assists her with his army and defeats the invaders.Chhatrasal is overjoyed and insists that Bajirao spend Holi with them. Mastani andBajirao develop feelings for each other andhe gifts her his dagger, which is a symbol of marriage among the Bundelkhand Rajputs. He soon departs for Pune, where Kashi greets him with a tour of their newly-built Shaniwar Wada and shows him the Aaina Mahal (hall of mirrors) which allowsher to see him from her room.Determined to pursue her love, Mastani arrives in Pune but is treated harshly by Bajirao's mother Radhabai  and accommodated in the palace for courtesans. She tolerates this insult and appears to dance before Bajirao on the occasion of Parava. Radhabai scornfully offers her the occupation of a royal dancerbut refuses to accept her as a daughter-in-law. Mastani travels to the King and expresses her desire to be with Bajirao before leaving to wait for him at a ruin across the river. Bajirao crosses the river in the midst of a storm and chides her persistence, reminding her that he is already married and that his court will never respect her if she is with him. She agrees despite his warning and he declares her as his second wife.Bajirao leaves to confront the Nizam of Deccan  and although his odds of victory are slim, he returns successful. A pregnantKashi witnesses Bajirao embracing Mastani, who is also expecting, in the Aaina Mahal and leaves for her mother's home. She returns months later with her newborn son, who is named Raghunath in joyous celebration. Mastani also gives birth to a son, whom Mastani and Bajirao name Krishna Rao, but when Krishnaji Bhatt, the head Brahmin priest, refuses to conduct the naamkaran (Hindu christeningceremony) and he is deemed illegitimate, Bajirao names him Shamsher Bahadur. A few years later, Kashi's eldest son Balaji Baji Rao (alias Nana Saheb) returns from Satara and expresses hatred towards Mastani for disrupting his mother's marriage.Kashibai is informed of a treacherous planto murder Mastani and her son during a festival by Shiva Bhatt, another Brahmin priest. Kashibai reluctantly relays this news to Bajirao, who rescues both of themfrom certain death. Following the murder of Shiva Bhatt by Krishnaji Bhatt, Bajirao is enraged. For Mastani's safety and to grant her a royal abode, Bajirao builds Mastani Mahal for her. Bajirao, however, isbroken hearted due to the betrayal of Radhabai and Chiman Appa, when Pant informs him that he must defeat Nasir, the vengeful son of the Nizam. Bajirao proclaims that even if he loves Mastani, his life and allegiance is always to his cause, so he decides to enter the battlefield.After Bajirao leaves for battle, Radhabai and Nana Saheb imprison Mastani and Shamsher Bahadur. After Bajirao single-handedly defeats Nasir, he receives news of this treachery and collapses from his injuries. Kashi pleads with Radhabai to release Mastani so that Bajirao can recover, but her attempt is futile as Balaji Baji Rao burns the letter and refuses to release Mastani. Bajirao, delirious due to his sickness, dies from the trauma of his hallucinations, just as Mastani passes away in captivity. The two fated lovers are shown to be united in death.Star-cast*.Isha KopikkarThe actress is a big name in Bollywood and was seen in movies like36 China Town,Don,Kya Kool Hai Humand many more.Promo/Title SongAs the show is in development mode no promo is issued by the show team. Lets wait for promorelease.We will update the promo once it isavailable.Timing/Telecast*.TV Show Name :- ‘Bajirao Mastani’*.TV Channel Name :-Sony Tv (Sony Entertainment Channel)*.Launching Date :-  June2016*.Days :- Mon-Fri*.Show Timing :----*.Episode :- ---------*.Genre :- Drama
V

Exclusive First Look of Sony TV’s Bajirao Mastani
The beautiful tale of Bajirao Mastani created magic on the big screen!! Now it is time for television to reap the rewards of this interesting concept!!
As we know, Sony TV will bring to life this magnum opus historical concept. Sunjoy Wadhwa’s Sphereorigin and Nilanjana Purkayasstha’s Invictus T Mediaworks has been working on the huge project for the last few months.
News coming to us is that the Producers commenced open their ambitious project with a ‘mahurat’ shot on the sets yesterday, on the sets erected in Mumbai.
As per reliable sources, “The Mahurat shot of the show happened yesterday, wherein the entire production team was present. However, the casting of the show is still on. But the team wanted to ensure that they shoot their mahurat and make sure to roll the camera, before the commencement of the mahalaya phase.”
Here is the exclusive first look picture from the mahurat…. You can see seasoned actor Manish Wadhwa in the picture. He has been roped in to play the father of Bajirao.
We tried contacting Producer Sunjoy Wadhwa, but could not get through to him.
Here’s wishing the team of Bajirao all the very best!!
Exclusive First Look of Sony TV's Bajirao Mastani - Tellychakkar.com. Exclusive First Look of Sony TV’s Bajirao Mastani 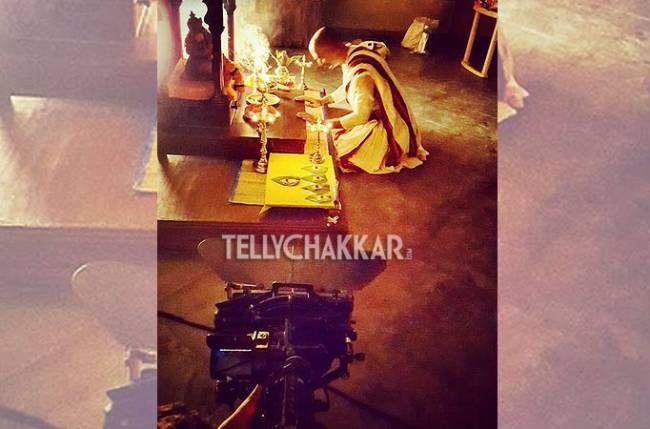 Now serial soon on sony tv
You must log in or register to reply here.