We’d said further that Chrome figures for January 2016 revealed that the DTH industry is a major beneficiary of DAS phase III. If that is the case, then DTH players should report even better numbers for Q4-16 and FY-16. Did they?And what will be the fate of the carriage industry once Jio has been rolled out completely across the country, along with low cost devices? Jio presents a huge disruption…. But more on that later. Lets look at the numbers for the DTH industry…


Combined subscriber additions for the annual period ended 31 March 2016 (FY-16) vis-à-vis the previous year (FY-15)grew by 12.3 percent of the three pay-direct to home (pay-DTH) operators in India whose financial and operational data is available in the public domain.  This subscriber growth rate was however a little less than half that these entities had in FY-15 at 24.7 percent as compared to FY-14. As indicated above, the three operators in this paper in alphabetical order are Airtel’s Digital TV segment (Airtel DTH), the Essel group’s Dish TV Limited (Dish TV) and the Videocon group’s Saurav Dhoot led Videocon d2h. 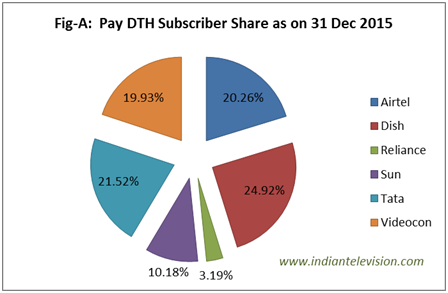 Assuming that the proportions remained approximately the same at the end of fiscal 2016, this means that the three operators in this paper represented 65.11 percent or almost two thirds of the Indian pay-DTH universe. This can further be substantiated by TRAI data below.

As per TRAI data, the number of active DTH subscribers in the country increased by 25.5 lakh between Q3-16 and Q4-16. The combined subscription numbers reported in their financial reports by the three players in this paper have grown by 17.1 lakh or 67.02 percent of the total increase across the country. Hence it is safe to assume that the three players in this paper represent about two-thirds of the total pay-DTH subscribers in the country and it can be further assumed that their combined performances represent approximately the performance of the pay-DTH industry in India.

Besides the six pay DTH players mentioned above is Doordarshan’s (DD) FreeDish DTH service – the largest DTH player by far in terms of subscribers with an estimated 15 million or 1.5 crore subscribers in 2015 as per the KPMG-FICCI Indian Media and Entertainment Industry Report 2016 (KPMG-FICCI M&E Report 2016) titled The Future: Now streaming. It must however be noted that an exact number for registered or active subscribers is not available since this is a free DTH service. Prasar Bharati’s chief executive officer Jawahar Sircar had said during an exclusive interview in June this year, “As the (FreeDish) antennas are available in the market (at a nominal one-time price ranging between Rs 3,000-4,000) and no monthly subscription is paid, it is difficult to know how many television households have FreeDish. This audit will become easier when we complete the process of encryption of FreeDish while keeping it free to air.

Will there be a launch of jio DTH.and also free DTH in market available easily at low price.
S

dinee said:
Will there be a launch of jio DTH.and also free DTH in market available easily at low price.
Click to expand...

May be free 6 month all channel & jio service :shy

Surprised to see Sd's total active subscribers if they continue like same way as of now its hard for them to have this much subscribers also in future  and also its good that they have huge number of subscribers in four states only :luv

Good going Airtel, Tata and Dish :luv
You must log in or register to reply here.