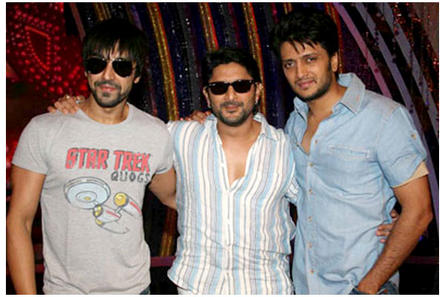 Our source says, “The semi final episode was a joy ride for each and everyone in attendance. The promotion for the film Double Dhamaal is in full swing and the stars Riteish Deshmukh and Ashish Chowdhary have started making TV appearances to promote their upcoming film which is set to release on June 24. The duo along with Arshad Warsi who is the judge on the show gave a spectacular performance on the show. The semi final episode was shot yesterday wherein Shekhar ke Movers consisting of Shailesh Lodha, Supriya Pilgaonkar, Nikhil Ratnaparkhi and Istiyakh Khan were eliminated. The smart one liners and comments that flowed along with the great chemistry between Riteish, Arshad and Ashish charged the atmosphere. The grand finale episode will be shot on June 7 between Arshad and Shreyas’s team. Raveena as usual looked stunning in black while Ashish kept it simple and wore a T-shirt and jeans. Arshad was in a relaxed mood in capris meanwhile Riteish charmed everyone in his blue shirt.”

We spoke to Sunil Grover who says, “It was a memorable experience. We had a great time shooting the episode. It was a close tie between the teams but ultimately the best two teams were in the final. I can’t disclose the name of the eliminated team right now. All I can say that it was really a Double Dhamaal episode.”

Roshni Chopra almost echoed the same thing, “It was an enjoyable experience. We shot the episode yesterday and we had a blast.”