DTH is ahead of cable TV in seeding of set-top boxes (STBs) in Phase III areas of digital addressable system (DAS), as per data provided by the distribution platforms to the Ministry of Information & Broadcasting (MIB). Out of the 35.21 million STB deployment in DAS Phase III areas, direct-to-home (DTH) platforms have seeded 24.17 million boxes as on 1 February. Multi-system operators (MSOs) are way behind with 10.95 million STBs installed in the TV households. Headend-in-the-sky (HITS) operators have seeded just 88,791 STBs in the Phase III areas, according to MIB. The total STB seeding of 35.21 million represents 86.82% of the total TV households in DAS Phase III areas. It is pertinent to note that out of 625 MSOs who have registration for operation in Phase III areas, only 290 have uploaded seeding data for STBs in the management information system (MIS). All the six DTH operators have uploaded seeding data. In the case of HITS, only one of the two has filled seeding data. According to the MIB, the actual position would be much better as all the registered MSOs and HITs operators have not provided the seeding data. Among the major states, Andhra Pradesh has managed to seed STBs in 71.11% of the 24.53 million TV households. In Bihar, Maharashtra, Karnataka, Punjab and Kerala, seeding has been 100%. Some states like Uttar Pradesh, Rajasthan, Odisha and Gujarat have seen more than 90% seeding. In Telangana and Tamil Nadu, STB seeding has barely crossed 30%. STB seeding in West Bengal and Madhya Pradesh is 57% and 63% respectively. 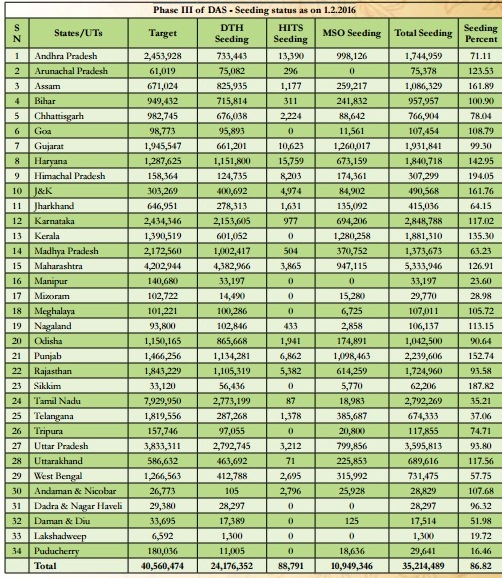 In most of the states, DTH is ahead of cable in STB seeding, except the states of Andhra Pradesh, Himachal Pradesh and Telangana. In Punjab, DTH and cable are neck and neck in terms of seeding. DAS Phase III has been stayed by the High Court of Judicature at Hyderabad, Bombay High Court, Sikkim High Court, Odisha High Court, High Court of Chhattisgarh, Madras High Court and Allahabad High Court. The High Court of Chhattisgarh had made it clear that no further stay would be granted in the matter. In Andhra Pradesh, Telangana and Uttar Pradesh, the stay got extended further. The Chhattisgarh High Court had clarified that it would not grant a stay beyond the two-month period. Meanwhile, Sikkim cable operators withdrew their appeal. Alarmed by the stay orders, the MIB had filed a petition seeking transfer of DAS Phase III cases related to the apex court and the vacation of stay orders granted in all these cases. The Supreme Court passed an order withdrawing all the appeals in the high courts, and transferring them to the Delhi High Court, which is now the designated court for all DAS Phase III-related cases. All future cases in the matter will be heard by the Delhi HC. The MIB had set up the MIS for collection of seeding data from MSOs, DTH operators and HITS operators online. All registered MSOs, DTH and HITS operators were requested on 27 October 2015 to log in to the MIS software and upload area-wise STB seeding data for Phase III areas. They were also advised to update seeding at least once a week. The ministry is currently issuing alerts to defaulters. Minister of State in the MIB Rajyavardhan Rathore recently told the Lok Sabha that DAS Phase III has been almost completed in the states of Arunachal Pradesh, Assam, Meghalaya, Bihar, Goa, Gujarat, Haryana, Himachal Pradesh, Kerala, Karnataka, Jammu & Kashmir, Maharashtra, Nagaland, Punjab, Sikkim, Uttarakhand, West Bengal, and Andaman & Nicobar, as per data provided by the distribution platforms. It is nearing completion in Andhra Pradesh, Jharkhand, Chhattisgarh, Odisha, Rajasthan, Uttar Pradesh, and Dadra & Nagar Haveli. In other states and Union Territories it is yet to be fully achieved, he stated.

bro after court in last line that is not matching with article :lol

Rushil.D said:
bro after court in last line that is not matching with article :lol
Click to expand...

Good to see this Thanks for the share Kumarvishwas bro

Breaking TRAI's analysis behind the base NCF, amendments to the Initial capacity and Multi TV NCF