Was waiting for this one from the anouncement itself. and the most intrested thing was the tagline. 'Duniyaki sabse bada superstarki, sabse bada fan
Movie starts from the journey of Gourav (the one who eats, breaths, lives Aryan Khan) to meet his Superstar.
Cleanly explains that the extremes of the obsession of a fan is beyond the illegal capabilities of a normal human.
Absolutely stunning performance by SRK as Aryan Khan and his Fan Gourav. One of the best performance by him in the recent years, may be the best after 'My name is Khan'. Although both characters are marvelous, Gourav remains in our heart. Otherthan SRK, almost all the characters were fresh faces and that brings a huge freshness in the movie too. No boaring scenes, masala scenes, 'created' comedy scenes etc. everything was the man himself 'SRK'. Truely a One man show. VFX was superb and Stunts gone at top notch.
Both first half and second half entertained well, but the thrilling mode in the second half was made like a cat &mouse game that we have allready seen in several movies. otherthan this, no negatives i felt.
Overall Fan offers several moments that will make it tough for you to take your eyes off the screen.. I bet Recomended
And one word, nothing but the last
Actor SHAHRUKH KHAN is back..!!

Excellent movie
Outstanding performance
The King is back.

BIG B about FAN movie 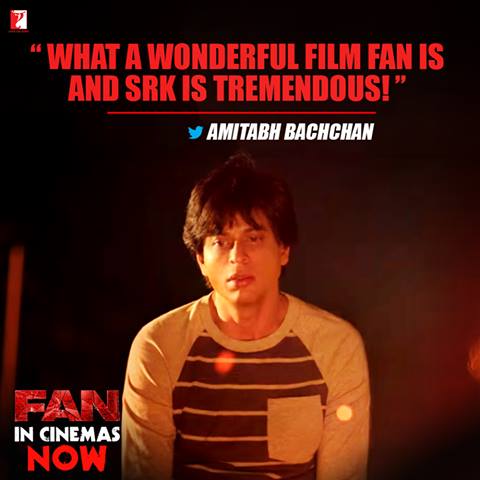