GST on STBs comes down to 18 per cent

The Goods and Services Tax (GST) Council has reduced rates for 66 items, out of the 133 items under review. Set top box (STB) is one of these items that now come under the 18 per cent tax bracket, lower than the previously prescribed 28 per cent. Along with this, optic fibre will attract 18 per cent tax against 28 per cent decided earlier.

This is expected to help speed up the digitisation process as the sectors falling short on the affordability front will breathe easy.

In a statement issued by Dish TV, the company said, “DishTV welcomes the government’s move to reduce tax slab rates and as a result DTH Set Top Box and Cables, which were proposed under the tax slab rate of 28 per cent, has been reduced to the tax slab rate of 18 per cent. This results in ease of working capital management and optimisation of cash flow.”
The digitisation of cable television in India has been completed on paper and the government, along with the entire industry, is awaiting the actual completion of the process.

GST on STBs comes down to 18 per cent

So STB prices will come down again. Recently all DTH operators increased the Prices. 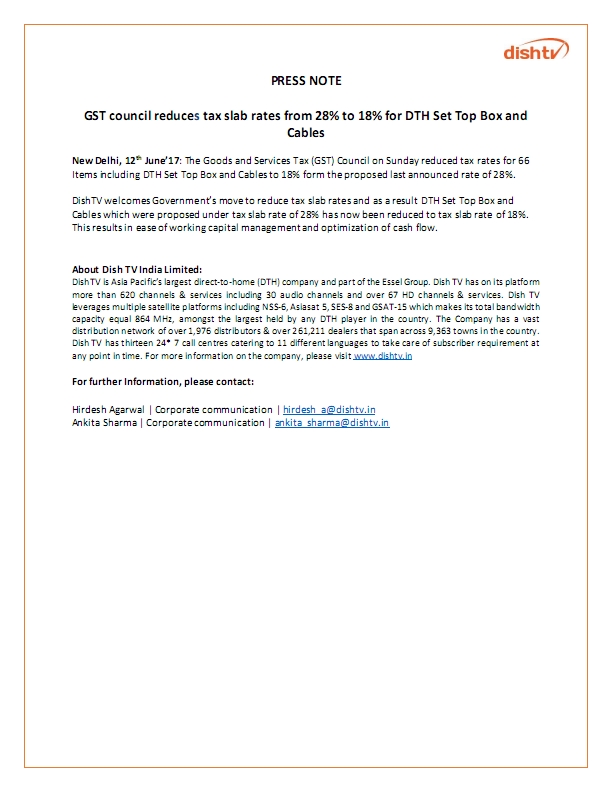 Yes, the prices of STBs would be further decreased. Good news for those who are thinking to buy STBs after 1st July 2017.

Breaking TRAI's analysis behind the base NCF, amendments to the Initial capacity and Multi TV NCF