.
Intelsat 20 is shown at the Spaceport’s S5 payload processing facility after being integrated on the cone-shaped adapter that will serve as its interface with the Ariane 5 (photo at left). In the other image, HYLAS 2 is fueled in a separate high-bay area of the S5 facility.

Both satellite passengers for Arianespace’s upcoming heavy-lift Ariane 5 mission are being readied for the August 2 mission from French Guiana, undergoing key steps of their final preparations in the Spaceport’s S5 payload processing facility.

The HYLAS 2 relay platform has received its propellant load in the facility’s S5B dual-function hall, which is capable of handling both satellite integration and fueling. Separately, Intelsat 20 has been mounted on the cone-shaped adapter that will serve as its interface with Ariane 5, marking the first contact with launcher hardware during activity in the S5A integration hall.

Arianespace’s upcoming mission – designated Flight VA208 in the launcher’s numbering system to signify the 208th mission of an Ariane family vehicle – will be the fourth for the heavy-lift Ariane 5 in 2012.

Its HYLAS 2 payload was produced by Orbital Sciences Corporation for Avanti Communications, and has been conceived to deliver high-speed, low-cost two-way data communications with the latest Ka-band technology. The satellite’s 24 fixed beams and one steerable beam will provide data capacity to telecommunications, enterprise and government customers in the fast-growing markets of Eastern and Southern Africa, the Middle East and across the Caucasus.
The Intelsat 20 passenger for Ariane 5’s next flight was built by Space Systems/Loral for Intelsat, and its C- and Ku-band payload is optimized for high-power distribution of video, voice and data network services. This spacecraft will replace the Intelsat 7 and Intelsat 10 satellites, which are co-located at 68.5 degrees East longitude. 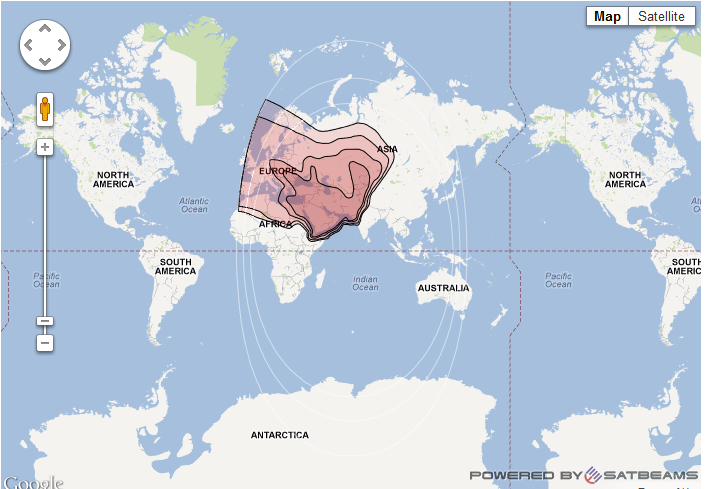 Ku-band Europe/Middle East/Central Asia (EMCKH) beam (predicted)
You must log in or register to reply here.