I musicspace price is Re.35 per month 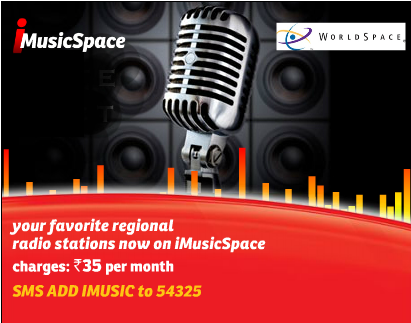 But price is too much as like tata sky active music.

But i feel it is useless compared to TS active music.

Price is too high...

Now dubbed iMusicSpace the channels cover an extensive collection of latest and retro Hindi songs, as well as regional music channels. Customers can now enjoy 24X7 radio on their TV in their native dialect be it Hindi, Bengali, Gujarati, Marathi, Punjabi, Tamil, Malayalam, Kannada or Telugu. The cost is 35 Rupees a month (about 65 US cents).
Airtel CEO-DTH/Media Shashi Arora said, “The launch of Worldspace Radio on Airtel was an industry first and we are ecstatic to re-launch the new and evolved iMusicSpace application today on Airtel Digital TV. This service is yet another step by Airtel towards making TV a wholesome entertainment package for customers and we look forward to our partnership with Timbre Media for the WorldSpace Radio service”.
The service has been launched on the DTH platform in association with Saregama and Timbre Media who will jointly provide the content for the application.
Mathewkutty Sebastian, CEO of Timbre Media, a company formed in 2010 by the former employees of Worldspace India, said: “Timbre Media is happy to be able to offer Airtel DTH subscribers the music experience they enjoyed in the past on this platform, brought to them by the very same dedicated team of radio professionals who pioneered genre based programming in India for WorldSpace.”

But i feel it is useless compared to TS active music.
Click to expand...

point to be noted..actve music in tata sky is better then this and price is fine for that but crappy one adtv with same price...
You must log in or register to reply here.