Karan Johar, known as a godfather to many in film industry is in talks to launch Shahid Kapoor’s brother Ishaan Khattar in a new project. It was earlier reported that Karan had signed Ishaan for the remake of Hollywood movie The Fault in our Stars but the project was later shelved. This was the same movie which was earlier going to launch Saif Ali Khan and Amrita Singh’s daughter Sara Ali Khan. Post this, Ishaan went ahead to sign Iranian filmmaker Majid Majidi’s next directorial movie.

However for all those who were waiting for Karan to launch this next star kid, there is some good news waiting for you. As per the reports in DNA, while the remake of Fault in our Stars is shelved, Karan is planning a different project for Ishaan. A source says, ” Karan wants to launch him in one of his future ventures as he finds Ishaan promising.While now the fault in our stars is not being made, KJo will make another project with Kapoor Jr. Shahid and Ishaan’s mother Neelima are excited for both the projects and are waiting for the announcements to come from makers.

For all those who are unaware, the celeb kid has also been a part of Udta Punjab in the production team. Therefore, it is quite evident that his wish to pursue acting is every bit true. Plus, with such a doting brother, looks like he will be fortunate to have one rocking debut. In fact, Shahid even expressed his desire to work with his brother! When a leading entertainment portal asked Shahid about his brother’s plans to enter Bollywood, the actor said, “Yes, Ishaan will definitely try his hand at acting. I don’t know when it will happen or how. It may be anytime soon. But I know that Ishaan loves Bollywood and wants to work in films. When Ishaan acts in a film, then I will be his co-actor.”

So with Karan taking Ishaan under his guidance, the wait to see them together for a project will definitely be a tough one. Also we are curious to know which actress will be finalised opposite Ishaan in both the movies. Will a star kid make debut besides him or will he romance an already established actress? Let’s wait for the makers to announce it. 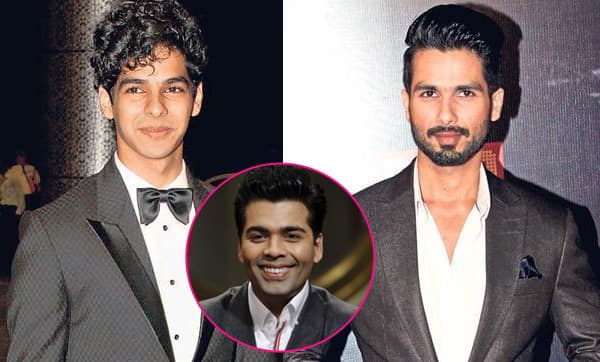