Koffee with Karan Season 5 Gets a Special Emoji on Twitter

Social media platform Twitter has curated a special emoji for popular talk show "Koffee with Karan season 5".
Filmmaker Karan Johar will be back on the small screen with the fifth edition of the popular chat show on November 6. It will be aired on Star World and Star World HD.
From Thursday and for the rest of season, users can engage, interact and join the conversation using the special emoji.
They can tweet using #KoffeeWithKaran, #KWKonSW and #KWK and the iconic yellow coffee mug emoji will appear next to the hashtag in their tweet, read a statement.
As an innovative twist, every week the show will also announce a new hashtag fashioned on the name of the celebrity guest. The hashtag will also activate the special emoji.
Viral Jani, Head of TV Partnerships, Twitter India, said: "'Koffee with Karan' is an iconic show on Indian TV and we are excited to announce creative innovations and release exclusive content and videos on Twitter for this season. The first-ever 'Koffee with Karan' emoji and the special celebrity hashtags will also delight fans across the globe."
In its past seasons, the show has been graced by a string of A-list actors including Amitabh Bachchan, Shah Rukh Khan, Kajol, Rani Mukerji, Kareena Kapoor, Saif Ali Khan, Preity Zinta, Aishwarya Rai Bachchan, Sanjay Leela Bhansali, Gurinder Chadha, Farah Khan, Abhishek Bachchan, Anil Kapoor, Sonam Kapoor, Parineeti Chopra, Alia Bhatt and more at their candid best.
This time, Shah Rukh Khan and Alia will be seen promoting their upcoming film "Dear Zindagi" in the fifth season of the talk show. 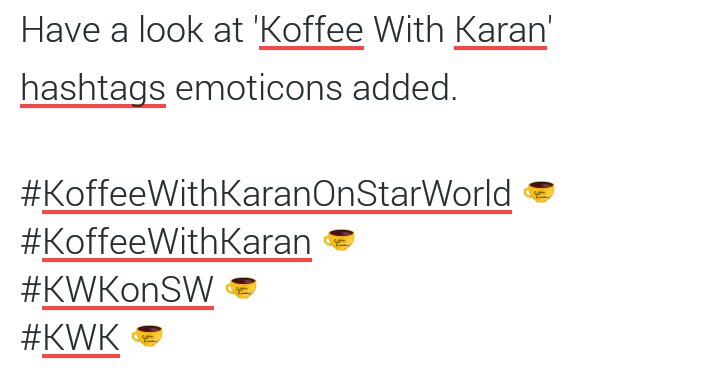