Little development, lots of media
There is today a mobile-DTH ecosystem sprouting around rural media consumers who have sharp and specific demands 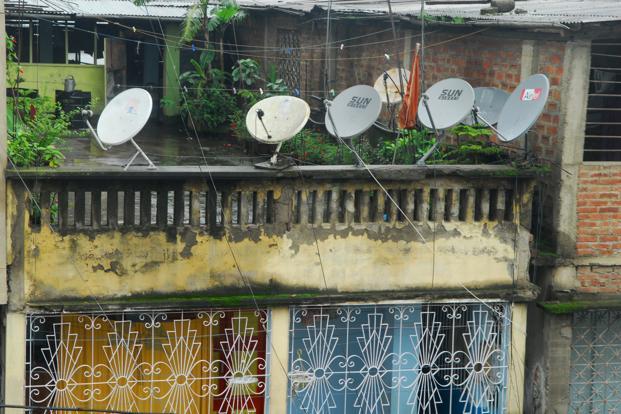 Rural media demand is an unmet need that the private sector recognizes and is busy raising capital to gear up for. Major direct-to-home (DTH) television companies such as Tata Sky, Videocon, and Dish TV of the Zee group are reportedly seeking funds through initial public offerings or from private equity funds for expansion in semi-urban and rural areas.
You do not have to go much beyond the rural perimeter of any city to see why—DTH dishes stick out of pucca and kaccha rooftops everywhere.

But if you do venture into the interiors of any state and see what the nature of the DTH demand there is, you get a sense of what media now means to India’s rural population. A couple of decades after the rural newspaper revolution in the regional press began, there is today a mobile-DTH ecosystem sprouting around rural media consumers who have sharp and specific demands.

On the one hand, nothing has changed. Bad roads, intermittent electricity, low wages, not enough work available round the year, inadequate irrigation. On the other hand, quite a bit has.

If you sit down to start a recorded discussion with a mixed group of scheduled caste and scheduled tribe women who both work in the fields and roll bidis, you have to ask them to please switch off their mobile phones. And if you ask a little old woman in the group what she likes to watch on TV, she will say, the haathi (elephant) and baagh (tiger) on Discovery Channel. And add that around six in the evening children come home and watch Discovery and cartoons. Older people in the village watch DD Odissa’s Aamo Swasth, a health programme.

In the same SC/ST village, Devapalli Chamarpada, in block Dhankoda, in Sambalpur district in western Orissa, if you ask the men if they listen to radio, they laugh. “Radio ka to zamana hi nahin (It’s not the age of radio any more).”
What has not changed is the level of poverty, or the state’s service delivery. The women do not know if there is a fixed government rate for bidi rolling, they get Rs.50 for a thousand bidis if the leaves are supplied, Rs.70 if they are using leaves they have collected themselves. The men get a daily wage rate of Rs.120 a day but there is not enough work to be had. Nobody in this scheduled caste and scheduled tribe village of 300 families has a BPL (below poverty line) card.

Farming is the main occupation but water for irrigation is a big problem. When the rainfall is low, the water from the canal does not flow. Electricity has fixed hours, and one of the hours when the “line” is not there is when the evening farm programmes come on. Not all homes have TV, it is a poor village, but enough people watch television somewhere in the village to have clear opinions: OTV’s news is preferred to Doordarshan’s because, as the farmers explain, they have more reporters in the field, better local news! In village after village, of all the DTH services on offer, Doordarshan’s free DTH, DD Direct, is least in demand: “Only 50 channels!” And not enough Oriya channels.

The plaint about irrigation is repeated in different parts of the district. In Redakhol block in a village called Badbahal, the farmers watch the narrowcasting farm programmes offered by the Sambalpur Kendra of Doordarshan if the power supply is there, but irrigation is a major problem. Their fields are irrigated only if the rains are good. Roads too are an issue. Child development services? No child in the village avails of them because the anganwadi is too far away.

A little distance away in the same block, the women of Sundrimundra, a village of 400-plus households, reiterate the water supply problem, talking specifically about how they cannot access clear drinking water. They laugh about the serials they enjoy, talk about cookery programmes such as the Oriya Amar Rasoi (My Kitchen), recall the public service spots they have seen on AIDS, reproductive child health, and on female foeticide. They tell you that they watch cricket. And while yes, some of their homes have subscribed to DTH, nobody has DD Direct. It is free, but it does not give an array of private sports channels, its news is not breaking news and is available only briefly through an entire day.

But here’s what they will watch on DTH other providers give them: if there is a clash between a programme on legal information for the citizen and a serial on one of the other channels, they will opt for the former—serials they can catch when they are repeated.

And here’s what they miss, which none of their many channels on DTH give them: The Orissa school board this year changed the format of its exam papers, and students in rural areas wanted desperately to get information on TV on how to handle the new format. A young girl wanted a TV programme which would tell her how to handle questions in a job interview if she was applying for a teacher’s job. And a bunch of women said, give us programmes we can learn from. Kalyani, the health magazine programme which ran for years on DD, is unfailingly mentioned in every discussion, in every state.

A huge rural demand is for news. There is some faith in DD’s news as being reliable. In an unauthorized colony called Shyam Vihar in rural Delhi, the men say they treat DD news as reliable, and a young girl adds touchingly, “National to national hi hai, na? Galath ho hi nahin sakta.” But every group you talk to will say private news seems fresher (it’s breaking all the time!). And in a state with a regional language, the fact that DD Direct’s carriage fee of Rs.2 crore comes in the way of regional channels getting on this platform deprives it of many viewers.
In rural Delhi, where the residents are migrants from other states, news choices are dictated by which channel gives people news from their home state, so ETV Bihar is vital in the DTH bouquet they opt for. They also do the recharge from here for their families back home!

The rural media consumer is discriminating. Even the fairly poor will opt for a paid DTH service over a free one because he wants a choice of channels, good local news, a good dose of sports, and access to better serials and films. But in that bouquet DD National is an important channel, and there is a demand for public service information which clearly no DD, or private regional news and entertainment channel adequately meets. Farm programmes are watched, though regular power cuts in many areas are at the time of the day when they come on.

A dissident view on farm programmes comes from a resident of Gogardhia block of Madhubani in Bihar, who says, “Sure, we get farm advice but if you think of how often our wheat crop fails you wonder how much the farm advice is worth. Besides, the farm holdings are so small, we would rather just stick with the farming methods we know.”

In the same village, Bathnaha, people want to know why the abundance of TV channels cannot come up with better programmes for children. The single biggest factor in deciding what TV source is opted for, and when it is watched, is the children’s exams. In rural Delhi, the solution offered is simple: “When exams are on, we just don’t recharge our DTH that month!”

A whole DTH recharge ecosystem is building up. You SMS your ID number to a local sales point where somebody gets on the Net and recharges the package for you. In Naktideol, a part of Orissa which is insurgency ridden, the local dealer in the block headquarters sells some 15 DTH connections a month and now advises against Videocon because the service point is 120km away. He has a neat little diary of subscribers, with the ID and mobile number of each. Earlier, he would recharge if somebody called, now he’s got wiser, he tells them to come and deposit the cash when the recharge is due.
In Jamujori, a village that is some 60km from this block headquarter, the Maoists hold sway. You are advised not to raise the issue, and get out before sundown. Out of 350 families here, 80 are scheduled caste households, and barely 40 have TV. The rest do not have electricity connections despite their BPL status because the last-mile connection involves a bribe to the electricity department. The DD terrestrial antenna does not work here, the signal does not reach. People do not know what the NREGA (National Rural Employment Guarantee Act) wage rate is. But they too are clear that they want faster news and more local news, and want the cricket channels. Not many DD Direct Plus takers here.

In Madhubani in Bihar, watching movies on the mobile is big. If you have a more advanced phone you go to a shop which puts a movie into your phone’s memory: at Rs.5 a movie. Friends watch together or husband and wife watch entire movies on a handheld device.

Welcome to the evolving world of rural media.

(This story is based on focus group discussions conducted with Birendra Das and Rajkumar Jha.)
Sevanti Ninan is a media critic, author and editor of the media watch website thehoot.org.

G
Discussion Are you totally on DTH/cable or switched to OTT?
3 4 5

Discussion Why not make DD's HD channels mandatory for operators to carry?

Inviting members for maintaining the DTH Of The Month Thread/Poll

R
Seeking Help Which DTH is best for both HD and SD quality?