Sajjan Singh is kidnapped! Will Krishna be able to rescue him? To find out, watch 'Mann Kee Awaaz Pratigya', tonight at 10:30pm only on STARPlus HD.

Pratigya to have a happy ending 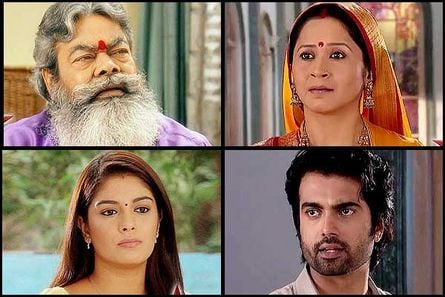 ​
Spellbound Productions and Walkwater Media Ltd.’s Pratigya, on Star Plus, is to end on a happy note soon like any other show on the television scene.

Here we at Tellychakkar.com get you its end track…

As seen in the earlier episodes, Ammaji (Asmitaa Sharma) had been staying with another man for quite some time after having lost her memory. But now she has not only regained her lost memory, but is also back in the house. However, her husband Sajjan Singh (Anupam Shyam) is not ready to accept her.

On the other hand, Krishna (Arhaan Behll) and Pratigya (Pooja Gor) have been trying their best to get Sajjan and Ammaji closer. In fact, in the upcoming episodes, they will even succeed in doing the same.

As our source tells us that soon there will be a Dussehra celebration in the show and going with the real meaning of this festival, which is victory of good over evil, Ammaji will be accepted by Sajjan Singh.

However, Sajjan Singh will ask Ammaji to give an agni pariksha which will see her completing some task. Ammaji will succeed in doing so. Thus, at the end of it, the entire family will come together giving way to a ‘Happy Ending’.

When we got in touch with Anupam Shyam, he said, “It will be a happy ending but before that Ammaji will have to give agni pariksha.”

Pooja on the other hand said, “The show will end on a happy note and we’d be shooting for our last episode tomorrow (26 October).”

Pratigya to have a happy ending | Tellychakkar.com Walkwater Media Ltd. and Spellbound Production’s Pratigya, on Star Plus, is all set to bid adieu to its loyal fans today (27 October).

It may be remembered that Tellychakkar.com had written about its end track on 25 October. Today, we talk to your favourite characters from the show.

Pooja Gor aka Pratigya says, “It’s a totally overwhelming feeling. I will always be grateful to the makers of this show for letting me be a part of such a wonderful show. We did put in a lot of hard work and yes, we got twice the return. We also had a great set of actors with so much of energy on the sets. On the whole, it’s been a beautiful journey and it is coming to an end at the right time.”

And though this actress has been associated with this show from the very first day, she still feels like she had recently joined, “I never realized how we completed three years. It still feels like yesterday, though there was this exhaustion phase in between. I will miss all of this.” Exhaustion? “Yes, there was this phase, when out of the ten scenes that we used to shoot for in a day, I used to be in nine of them. And at least three of them would be on different locations. Naturally, I used to get tired.”

Ask her if she’d be taking a break now to which she quickly replies, “I will be shooting for Lakhon Mein Ek and The Serial. Though, I do not have a clear idea about The Serial, Lakhon Mein Ek is definitely on. After that, I will take a break.”

Anupam Shyam aka Sajjan Singh, who went on to become an iconic character avers, “Things come and go, nothing stays forever, So, I will take whatever comes to me next.” When asked if he wouldn’t miss his cast and crew, he observes, “It’s not like I will never meet my cast and crew. Since we are all a part of the same industry, we will keep bumping into each other.” What about a break? “I am planning to go to my home in UP to meet my children after which I will be back.”

Though we tried contacting Arhaan Behl aka Krishna, he remained unavailable for comment in spite of our repetitive attempts.

The final episode just aired on Star plus

many regular viewers of this show will miss this show now. :-/