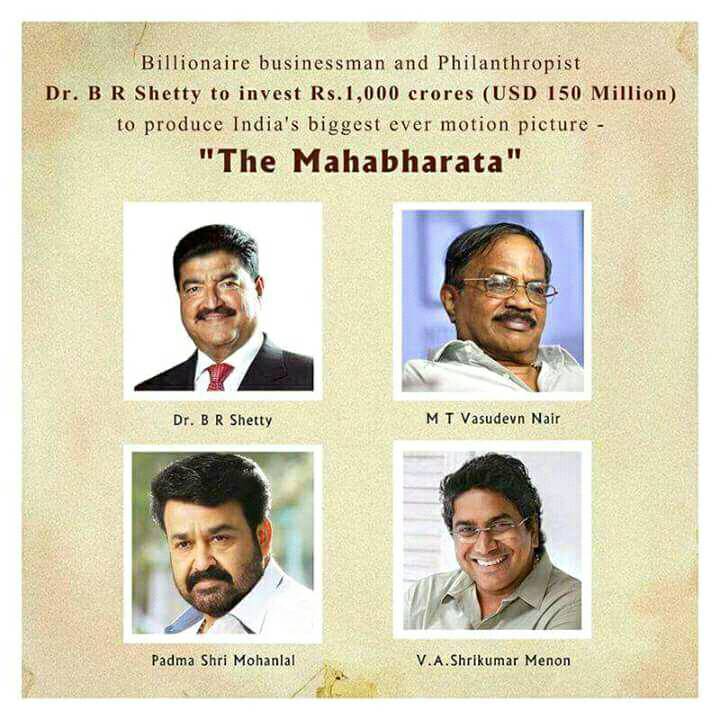 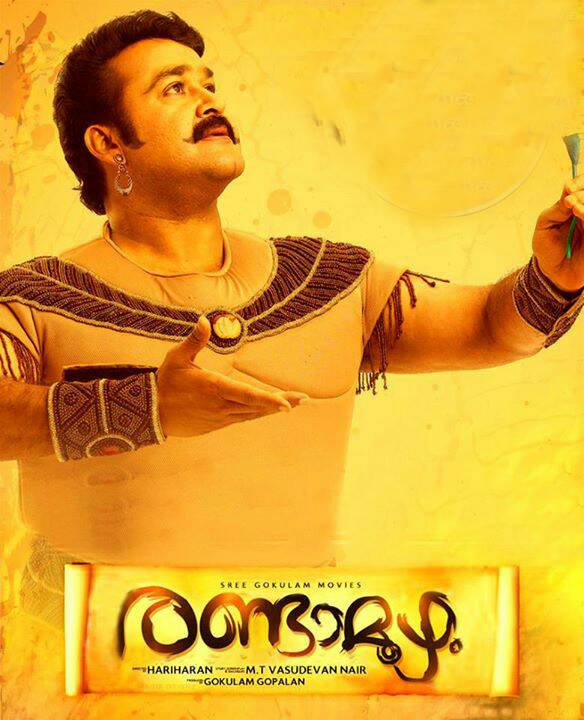 Mohanlal's much anticipated movie, 'Randamoozham', an adaptation of MT Vasudevan Nair's novel will be made on a whopping budget of Rs 1000 crore. As per latest reports, the film has received a mammoth investment by UAE-based Indian businessman, BR Shetty.

Touted to be country's most expensive motion picture, the film is directed by ad filmmaker VS Shrikumar. We hear that the film will be produced in two parts and is scheduled to go on floor by September 2018 for a release in early 2020. The second part of the film will be released within 90 days of the first part. Also primarily, it will be shot in English, Hindi, Malayalam, Kannada, Tamil and Telugu and will be dubbed into major national languages and leading foreign languages.

The movie which is based on MT Vasudevan Nair's novel Randamoozham, is a re-interpretation of Mahabharata from the perspective of Bheema.

RE: Mohanlal's Randamoozham to be made on a budget of Rs 1000 crore.

Mohanlal reveals his plans to play Bhima in Mahabharatham.

The entire Mollywood social media has been abuzz about Mohanlal's Mahabharatham, which is touted to be made on a budget of Rs 1000 crore. Lately, the superstar wrote on his blog how he is planning to prepare for the film based on MT Vasudevan Nair's novel Randamoozham.

"When a literary work like Randamoozham is made into a film, it warrants something greater than the usual preparation. Being the protagonist of the film, the next two years is very important and intense for me... I have train physically as well as mentally for the playing MT's Bhima. There are also several modes of war in Randamoozham - from battles with mace to those on chariots," Mohanlal wrote. "So, I will have to train under experts for these. I will have to prioritise the next one to one and half years for this, setting aside several commitments."

The actor said that all these were necessary "sacrifices" to achieve a greater dream. "For an actor like who doesn't take a conscious effort to prepare for the characters, this feat will be something novel and challenging," he wrote.

Manju Warrier is all praise for Mohanlal’s ‘Mahabharata’.

Mohanlal's upcoming epic film Mahabharata, based on M T Vasudevan Nair's novel Randamoozham has become the hot topic of discussion these days. Actress Manju Warrier, who will soon work with Mohanlal in 'Odiyan' is also all praise for the mammoth project. Manju, who is currently busy with Kamal's directorial 'Aami', took to her social networking page to appreciate the team behind this 1000 crore venture.

She wrote: Like every Malayali, I too feel proud and happy to see our veteran novelist M T Vasudevan Nair's novel Randamoozham is gearing up as a film, 'Mahabharata'. It will be a milestone for Indian cinema as the film promises to be highly advanced in terms of technical and visual aspects. Randamoozham is a sculpture made on words by the maestro MT sir, written by putting in his soul. I believe that the final output would also be such a classic.... Our dear Lalettan will portray the epic character Bheeman in the film. We can eagerly wait to watch him produce many legendary acts and natural expression that would replicate Bheeman on screen. I also wish that the director VA Shrikumar Menon happens to fit in all the Mahabharata events brilliantly in his frames. Waiting for the 'Mahabharata' days...(sic)"

The casting of the movie is currently in progress, as per the sources close to the project.

Bheeman was considered greedy, made fun of: Mohanlal.

Mohanlal has waxed eloquent about Bheeman on Mahabharata in his latest blog - My perpetual journey along with Bheema. All of us grew up listening to stories of the the Mahabharata, he begins. "The Bheeman in our minds was always big sized, he had a tummy which never got enough... he was viewed partly with admiration and partly with mockery. But MT Vasudevan Nair's Randamoozham shows us a Bheema which none of us knew, his softer side," he writes.

"Bheema too had troubles, loneliness, desires and dreams. But when I read that book, I never had a clue about it being made into a movie. I have never read a book with that intent. But finally it was MT himself who suggested that I act in the movie and I will always be grateful to him for that."