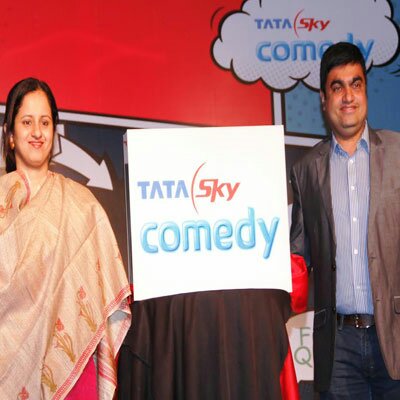 Tata Sky has added a new service to its diverse bouquet of content - Tata Sky Comedy. The DTH player has partnered with Shemaroo Entertainment as content partner, powered by Comedywalas. The tagline for this new service is ‘Haso Khulke’. Tata Sky had recently launched two interactive services - Actve Fitness in association with Suniel Shetty and Dance Studio in partnership with Madhuri Dixit Nene and Dr. Shriram Nene’s RnM Moving Pictures.

Tata Sky Comedy will initially be available to its subscribers primarily on TV and can also move to digital platforms in the future. The viewers can also see the popular comic strip Suppandi refreshed daily.

Launched today on 8 March 2016, Tata Sky’s latest addition aims to be a single destination for all formats of Hindi comedy content. The launch event also provided a glimpse of the service, as unfolded by stand-up comedians Sugandha Mishra and Sahil Khattar who are also a part of the service.

“We wanted a guide, an anchor with a youthful appeal who could carry the audience for this new service. Sugandha and Sahil are youth icons and are perfect to be a part of our service”, said Shemaroo Entertainment director Hiren Gada.

Priced at Rs 59, the standalone service aims at a non-stop clean entertainment for all age groups, across geographical and socioeconomic boundaries with a diverse range of formats exclusively for its subscribers.

Talking about the launch, Tata Sky chief commercial officer Pallavi Puri said, “With Tata Sky Comedy we aim to provide a fun way to relax for our subscribers. Comedy is a genre that the audiences have a huge appetite for, and we believe there is currently a gap for a singular destination for all types of Hindi comedy content. We wish to fill that gap with this latest offering from Tata Sky. In partnership with Shemaroo, it is our attempt to provide a one-stop shop for popular comedy formats that will be available to subscribers 24 hours a day. ”

The 24x7 ad free service based on a subscription only basis, will be free for the first 10 days for its customers. Placed at channel 102, the interactive service has a diverse range of formats like Bollywood Tadka which is an overview of Bollywood mixed with comedy. This comedy service features interesting formats like Scene Smaash, Pehchaan Kaun, Dekh Gaana Dekh, Filmy Fankaar, Pocket Films with Gauri, etc.

Seeking Help I plan on getting a new Tata Sky connection. Help me.