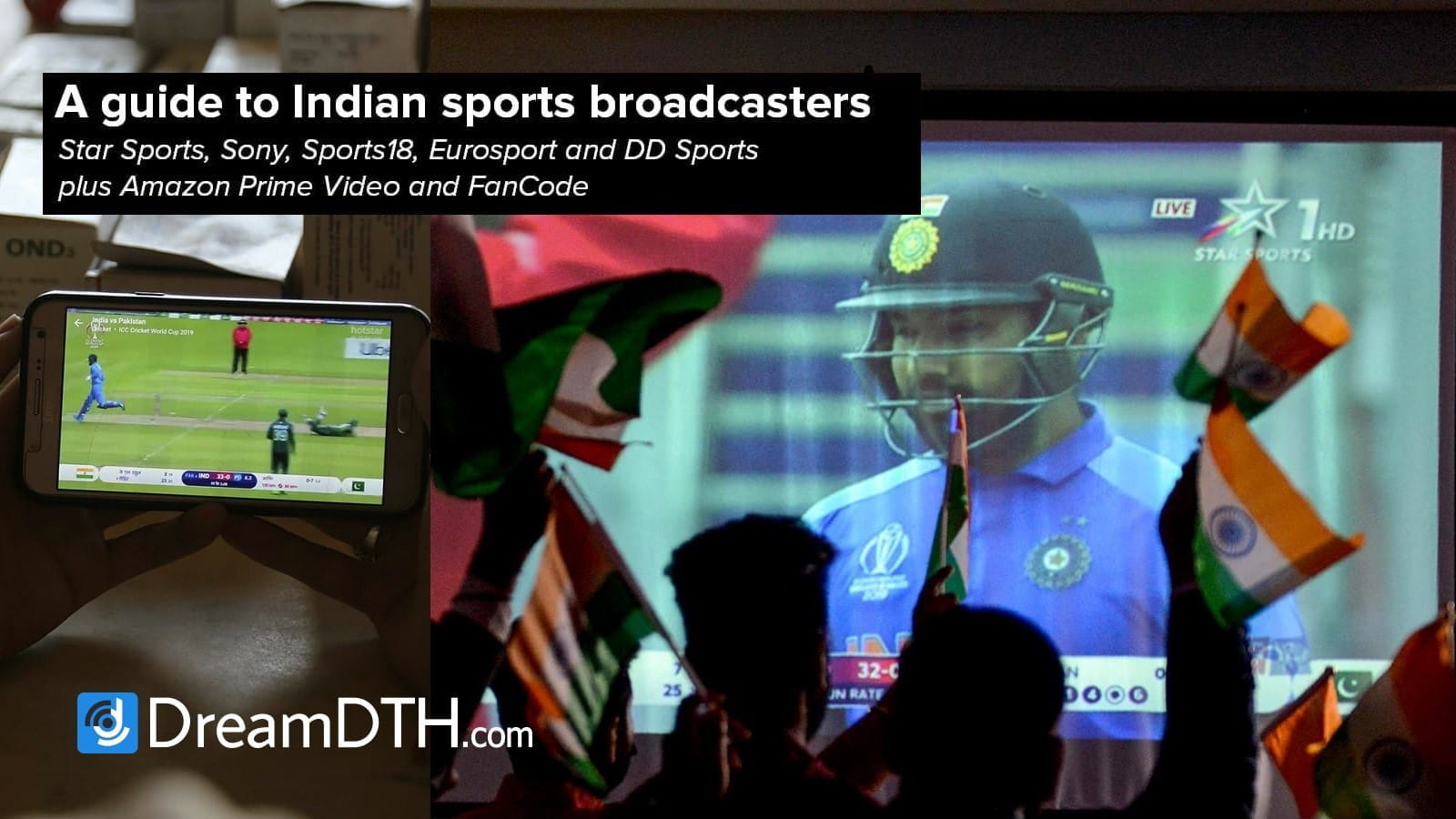 Discovery: from DSport to Eurosport

Discovery, which has been operating in the country since 1995, launched its sports channel DSport in February 2017, initially only in an HD feed that was downscaled to SD for TV platforms. The channel — whose logo was clearly influenced by that of Eurosport, its international network of sports channels — was originally a partnership with the content provider Lex Sportel Vision. It had a motley collection of little-known sporting rights, specifically to serve the needs of those who were sick of the constant display of cricket on Star Sports. With the new NTO tariff rules in 2019, Discovery temporarily discontinued the HD feed of DSport by not including it in any packages or bouquets, leading to TV platforms removing the HD channel — not that many of them carried the HD feed in the first place.

In January 2020, Discovery ended its partnership with Lex Sportel Vision, and the latter launched its own sports channel, 1Sports, on 14 February of that year, as explained later. Separately, Discovery decided to resurrect the HD feed of DSport on 17 February, and a month later, it rebranded the channel to Eurosport — after getting approval from the MIB from the same — just as the pandemic had been declared a global emergency. Over time, Eurosport HD was added by all DTH operators, which DSport HD was unable to achieve — which at least means that it has not faced any distribution issues like Sports18 1 HD or Sony Sports Ten 4 HD.

Eurosport has a limited, if diverse, selection of sporting rights, comprised of mostly niche events, and also aired the Tokyo 2020 Paralympics, where India won an all-time-best 19 medals. These include the American MLS (Major League Soccer) and the Dutch Eredivisie plus the Indian Women’s League in football; the EuroLeague in basketball; the Davis Cup in tennis, along with the far lower-profile ATP World Tour 250; the Tour de France cycling event; golf events like the PGA Tour; and combat sports events such as Impact Wrestling, plus a handful of others. In addition, Eurosport is currently airing the I-League, a major Indian football league, which is shared with DD Sports.

While these may not attract the big audiences that Star and Sony can, and Sports18 aspires to have, they are nevertheless a unique and welcome presence on Indian TV, which would have been all the poorer if not for Discovery’s efforts — given that such niche events are typically relegated to streaming services such as FanCode. For what it’s worth, all these are also aired on the Discovery+ streaming service, as with Disney+ Hotstar, SonyLIV or Voot.

Doordarshan’s DD Sports has been a 24-hour satellite channel since 2000, making it one of the oldest Indian sports channels after Star Sports and the erstwhile ESPN. It has aired several nationally significant events, such as the 2010 Commonwealth Games in Delhi and the 2012 Olympic Games in London, before private broadcasters took the rights of those events; the Rio Olympics in 2016 were the first to be aired by a private broadcaster (Star) instead of DD. For those two events Doordarshan also launched a temporary HD feed, as well as for last year’s Olympics in Tokyo — though Sony held the pay-TV rights to that event — but otherwise DD Sports is not available in HD, unlike DD National, DD News, DD India and Sansad TV.

The main problem with DD Sports is not so much the lack of an HD feed as its limited usefulness for viewers of pay-TV platforms. Doordarshan has been the beneficiary of the Sports Broadcasting Signals (Mandatory Sharing With Prasar Bharati) Act, 2007, which mandates private broadcasters to share the broadcast signals for ‘events of national importance’ — a vague list that is determined by Prasar Bharati alone, but which include a number of cricket matches featuring the Indian men’s cricket team, among other sports — with Doordarshan, along with part of the revenue. But since networks like Star have objected to such stream- and revenue-sharing over the years, Doordarshan came up with a creative solution a couple of years ago.

During ‘events of national importance’, DD Sports switches to a secondary feed called ‘DD Sports 2.0’ for pay-TV platforms that airs less high-profile, domestic events — such as the National Games — forcing pay-TV viewers to subscribe to the Star or Sony Sports channels for major events. Meanwhile, DD Sports is able to provide coverage of these big events to viewers of DD Free Dish and terrestrial DTT. It was only in July 2022, on a one-off basis, that the Indian men’s cricket tour of West Indies was aired on DD Sports across both pay and free platforms — in partnership with the FanCode streaming service, which otherwise has the exclusive rights to West Indies cricket. However, do not expect DD Sports on pay-TV platforms to show other such major events in the near future.

1Sports: a tiny player from a big fallout

After Lex Sportel Vision parted ways with Discovery in 2020 and launched 1Sports, it has simply become as irrelevant as the two Neo channels (Neo Sports and Neo Prime) back in the 2010s. Its programming schedule consists of highlights of the Afghanistan and Bangladesh Premier Leagues, plus insignificant events such as the Rolex Challenge Grand Tour. Unlike the two Neo Sports channels — which were key players in the sports sector in the late 2000s but were gradually starved of rights and faded into obscurity, shutting down in 2018 — 1Sports has never had any brand recognition, and in retrospect Lex Sportel Vision was better off as a partner of Discovery, since it clearly has been incapable of running its own sports channel successfully.

A more recent development over the past few years is the rise of streaming-only platforms acquiring the rights to major cricket events, in addition to other sports. The first-mover advantage belongs to an independent streaming service called FanCode, which is owned by the popular Dream11 fantasy sports platform. More than a streaming service per se, it positions itself as a multi-sport aggregator, and has steadily been acquiring sports rights that are left untouched by major broadcasters. In the three years since its launch in 2019, it has added to its kitty several cricket properties, most notably West Indies cricket, with which it signed an exclusive deal in April 2021 for a four-year period. This includes the Caribbean Premier League (CPL) which was previously broadcast on Star Sports.

Additionally it has deals with smaller cricket boards such as Afghanistan, Ireland and Zimbabwe, and also has the rights to the Bangladesh Premier League — aside from signing ad-hoc deals on a tournament-by-tournament basis for countries like Bangladesh which do not otherwise have an ongoing Indian broadcast contract. Aside from broadcast, FanCode has heavily expanded its merchandising, where it is the official partner for several sports leagues and teams from across the world. The platform has also doubled down on data and statistical analysis of live sports matches, tailored for fans.

Another major development was in November 2020, when Amazon Prime Video — which was so far known only for its entertainment and movie offerings — ventured into sports broadcasting by acquiring the exclusive rights to New Zealand Cricket, meaning that for the first time (aside from FanCode), a streaming-only platform would have the rights to a major cricket board without sharing them with TV broadcasters. The popular OTT platform has lost no opportunity in promoting its exclusive partnership with both the men’s and the women’s Kiwi cricket teams. Amazon had momentarily thrown its hat in the ring for the IPL broadcast rights — the ultimate deal in Indian sports — before pulling out when faced with scorching competition from more established players, but the New Zealand deal provides a good base for it to expand its sports portfolio, which other global streaming giants like Netflix have shied from.

Events whose rights are pending sale or renewal

There are a number of events whose Indian broadcast and digital rights are up for grabs in the coming years. These may be renewals of existing events, or the sale of upcoming events like the Paris 2024 Olympics. Irrespective of their previous rightsholders, it is anyone’s guess as to who will bag the next editions. They are as follows:

The below list summarises the current rights-holders for some of the most important sports, aside from those whose rights are up for sale or renewal as in the previous section. In most cases, the satellite rights-holder is also the digital rights-holder, with the notable exception of the IPL (from 2023 onwards) where the broadcast rights are with Star and the digital rights with Viacom18. In the case of Prime Video and FanCode, their acquired properties are typically not viewable on TV, unless a one-off agreement is reached as in the case of FanCode’s agreement with DD Sports to air the India tour of West Indies in July.

More than with any other genre, sports broadcasting in India thrives on contracts, so a broadcaster may or may not renew a given contract depending on its needs and capabilities, which may be a positive or negative for fans. Given the rise of FanCode and, increasingly, Prime Video in cricket events, and major developments like Viacom18 bagging the IPL digital rights and Star sub-licensing the ICC rights to Zee, it is clear that broadcasters and streaming services alike have to adapt and evolve with the changing needs and tastes of sports fans, to provide them with not only broadcast and streaming coverage but also interactive platforms and social media in one of the biggest sports markets in the world.