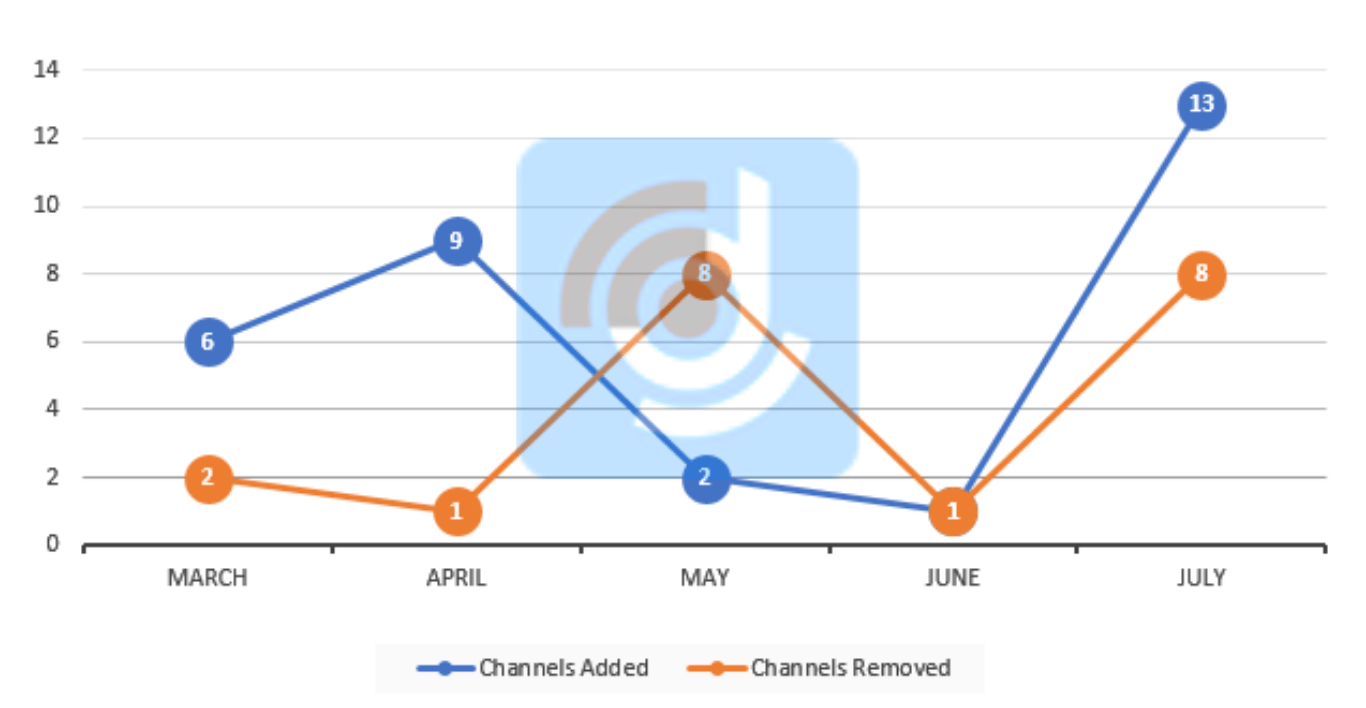 In July, Dish TV dropped 50+ channels from SES8 while Airtel Digital TV added the highest number of channels, no operator has added any HD channel and Tata Sky brought more new offers than others. Find out every major activity from Tata Sky, Airtel Digital TV, Dish TV, d2h and Sun Direct from the month of June 2020 in this exclusive article.

Tata Sky added 4 broadcaster channels on its platform including Lokshahi, Sadhna News Plus, Sadhna News UP/UK and Bhaskar News. The operator also dropped 4 channels- AXN, AXN HD, Jai Maharashtra and FYI TV18 (3 of which are shut down by broadcasters).

This month the DTH operator launched ‘HD PVR Big Sale’ under which it has dropped the price of its +HD recording box from Rs 8,900 to Rs 4,499. The cost of upgrading to this box and multi TV connection of +HD STB is also reduced to Rs 4,499.

Apart from offers, Tata Sky rolled out an OTA software update from its SD and HD boxes which brought a revamped Guide menu and many new features such as personalized channel suggestions, hidden SD version of channels who are subscribed in HD and new search window.

For existing Airtel DTH SD and HD users, the company launched an Online Recharge Dhamaka Contest under which every user which recharges their DTH through online modes will get assured Rs 100 Myntra discount voucher while a few randomly selected users will receive prizes of Rs 20 cashback, 6 months ARP or 12 months ARP, Airtel Xstream STB and Samsung 43′ TV.

Airtel also offered a 10% discount up to Rs 300 to its new customers who paid online for their SD, HD, and Xstream Box connections. It is also offering heavy discounts on new connections bought with annual packs. Apart from this, the company has launched the ‘AP SD Plus’ 6 months bundle pack and also increased prices for some of its curated packs.

d2h is owned by Dish TV and now the company seems to be making d2h south India focussed and Dish TV focussed in catering to the north Indian audience. In June, Dish TV has removed more than 50 south Indian channels from its SES8, now those customers who want to view these channels have to request for a free realignment of their dish antenna to ST-2 direction for getting d2h channels.

Sun Direct was last active in July, it has not added any channel and 4 channels- FYI TV18, FYI TV18 HD, AXN and AXN HD which were shut down by broadcasters have been removed. For new customers, Sun Direct brought a new connection offer in West Bengal, Odisha, and Maharashtra under which it is offering SD+ connections at as low as Rs 1,499.

Posted in: Analysis Direct To Home