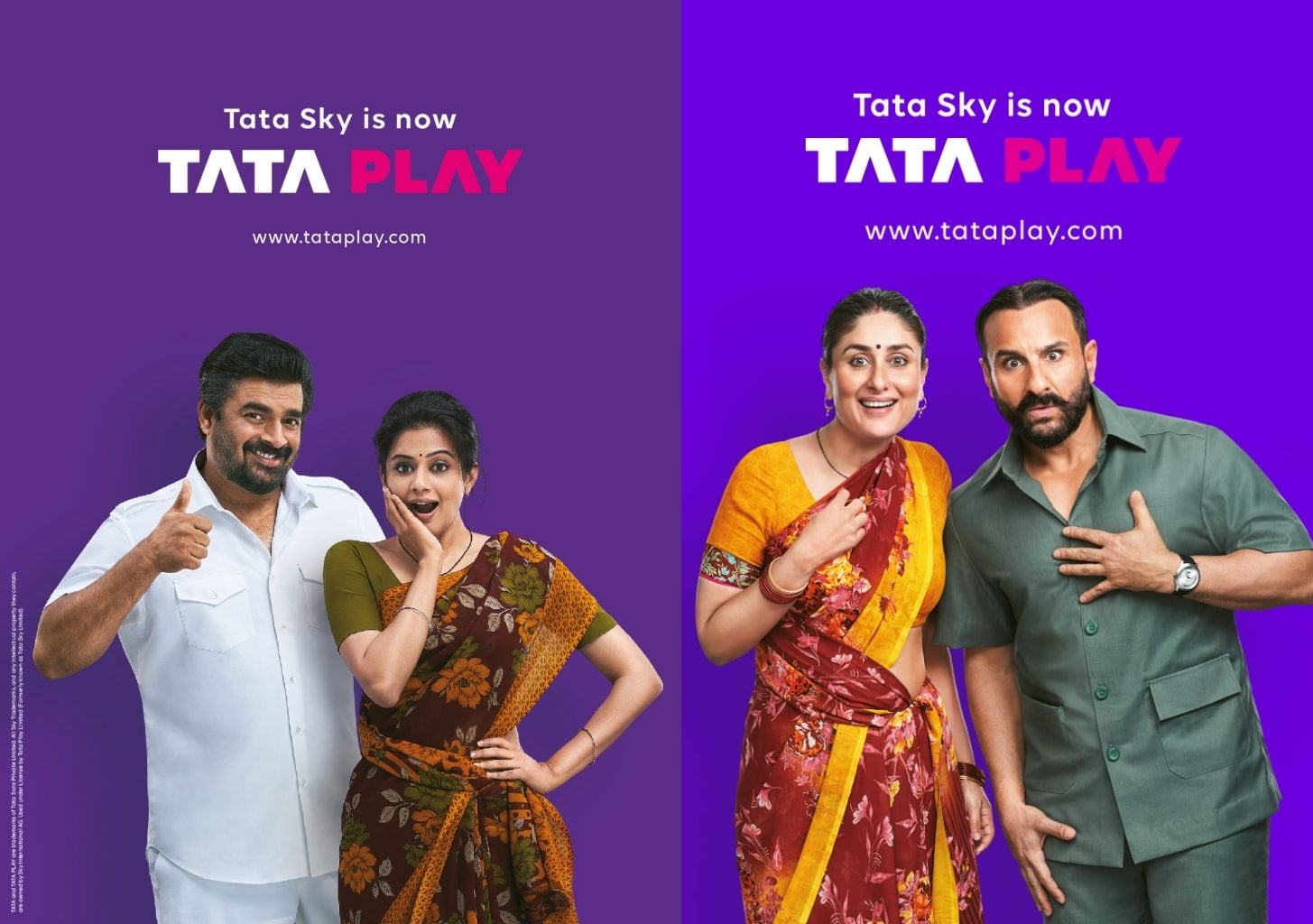 The rebranding of Tata Sky to Tata Play on Republic Day (26 January 2022) is one of the biggest brand name changes in India in the past several months. As India’s largest DTH operator embarks on a new journey without the globally recognisable Sky branding, it has started high-decibel brand promotions to ensure that the new name is imprinted in the hearts of crores of customers.

One only has to look into the past to realise that the then-Tata Sky has been no stranger to roping in A-list celebrities for its brand promotions and advertising. Celebrities have often been a tried-and-trusted approach to advertising, especially in India, and Tata Play’s four new brand ambassadors, Saif Ali Khan, Kareena Kapoor Khan, R. Madhavan and Priyamani, are a fresh addition to its long list of celebrity endorsers.

This is in contrast to the rebrand of Vodafone Idea to Vi in September 2020, where instead of celebrities — or for that matter Vodafone’s signature dog or ZooZoos — the brand launch campaign featured common people repeatedly humming a catchy jingle (often to the point of irritation), thereby establishing the brand in a markedly different way among Indians.

Even before Aamir Khan came on board in mid-2008, Tata Sky had made the child actor Darsheel Safary its brand ambassador in April 2008, around the time of the first season of the Indian Premier League. Darsheel is best known for his lead role in the 2007 Hindi film Taare Zameen Par that also starred (and was directed by) Aamir Khan. The kid briefly touched the heights of popularity before his reel teacher Aamir took over as Tata Sky’s ambassador.

Tata Sky started operations all the way back in August 2006, but it was only in July 2008 that it roped in Bollywood superstar Aamir Khan and introduced its iconic slogan Isko laga dala, toh life jingalala, to the extent that the word jingalala is usually associated with Tata Sky in common parlance. Aamir starred in a number of advertisements in various roles over the next several years and his persona drove home the point that Tata Sky was the next big thing in Indian TV.

The series of innovative advertisements, combined with the charisma of one of the most pathbreaking and unconventional Bollywood mainstream actors, established Tata Sky as a premium service for Indians who wanted more than just TV. Who better than the Mr. Perfectionist of Bollywood to introduce next-generation technologies like Tata Sky+, with its recording, pause and rewind features, to crores of Indians who did not even know of satellite TV in the first place?

One of Aamir’s unconventional advertisements was a dual role as a bride and a groom, showcasing the collaboration between Tata, a trusted Indian brand, and Sky, a world leader in satellite TV technology. In another ad, he played the role of a ventriloquist with a puppet to demonstrate various Actve-branded interactive services, emphasising that people could do much more with their TV than watch traditional TV channels. This was in the late 2000s and early 2010s, a time when even social media was in a nascent stage, and the OTT world of today was completely unheard of.

In the mid-2010s, India was slowly embracing OTT apps and the concept of anytime, anywhere streaming. Tata Sky celebrated its tenth anniversary in August 2016, and shortly thereafter, Reliance Industries launched Jio, its mobile network operator and telecom provider. The launch of Jio in September 2016 can be credited with well and truly heralding the content consumption age in India, and breaking the barriers of broadband connections to deliver high-speed 4G data consumption even in remote areas.

In the midst of this, Tata Sky unveiled a new brand identity in September 2016, introducing the updated Sky logo that is used in Europe, along with colourful gradients and multicoloured letters. To signal the change, it roped in Bollywood legend Amitabh Bachchan and rolled out its ‘Family Jingalala’ brand campaign, featuring him playing the roles of seven family members represented as string puppets.

Each member had different entertainment needs and Big B presented Tata Sky as the one-stop entertainment solution for everyone. This all came together in an advertisement featuring him as a rapper and uniting the puppet members in front of their Tata Sky connection. Amitabh continued to endorse Tata Sky products for the next couple of years.

Now that the company has dropped the Sky name and moved forward with a new name, logo and brand positioning, the newly named Tata Play has launched a nationwide advertising campaign, hijacking ad slots of the TV channels of its part-owner, Star India. It has brought in four leading actors for two separate ad campaigns: celebrity couple Saif Ali Khan and Kareena Kapoor Khan for the Rest of India (ROI), and South superstars R. Madhavan and Priyamani for its South Indian ad campaign. Each of these features the celebrities in common-man roles talking about the name change from Tata Sky to Tata Play, and promoting its most anticipated features, especially the introduction of Netflix on Tata Play and Netflix combo packs, as well as the waiver of all service fee charges.

The tie-up with Tata Play is a crucial step to Netflix’s growth in India, as it seeks to greatly expand its Indian user base through slashing prices and adding new content in order to be seen as a more formidable competitor to Amazon Prime Video, Disney+ Hotstar, SonyLIV and the like. It is also an important step for Tata Play as it seeks to be more than just a DTH operator, instead providing an all-in-one entertainment package through linear TV, OTT apps and broadband Internet.

Tata Play’s approach of separate North and South Indian campaigns is an interesting one. The Bollywood power couple of Saif and Kareena are in charge of promoting the ad campaign in multiple northern Indian languages, while R. Madhavan and Priyamani are the face of Tata Play in South India. Interestingly, Saif and Kareena were the brand ambassadors of competitor Airtel Digital TV in 2009 and 2010. However, it is not that Madhavan and Priyamani are unknown to North Indian audiences. The former is best known for 3 Idiots and the Tanu Weds Manu films, and was most recently seen in the Netflix series Decoupled, while Priyamani is well known for her role as Suchitra in The Family Man on Amazon Prime Video.

It is time to bid goodbye to Tata Sky’s multicoloured text and say hello to the violet and pink branding of Tata Play, and as was the case with Aamir Khan and Amitabh Bachchan in the past, the celebrity quartet will no doubt ensure that the new brand is cemented in Indian minds and hearts for many years to come.

Now Saif and Kareena Kapoor is both ambassador