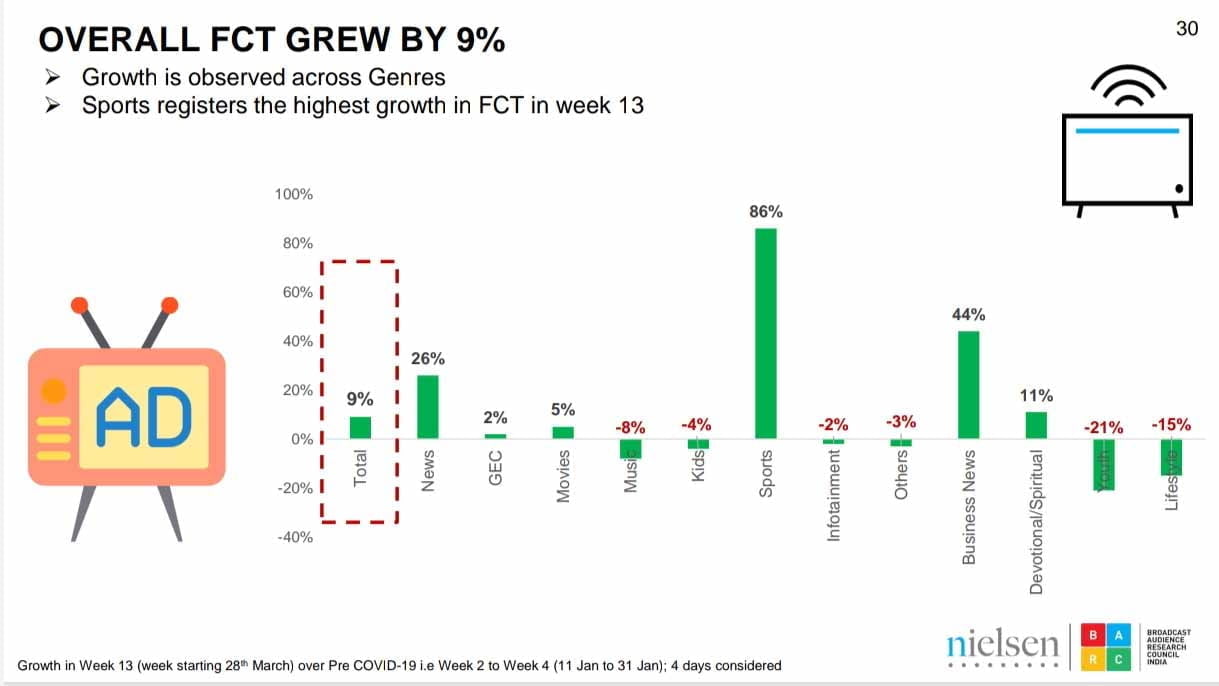 66x increase in social advertisements by governments and NGOs

During the lockdown, most people are staying at their home watching TV which has resulted in a significant rise in TV engagement across the countries globally. As per data released by BARC-Nielson, India also has seen a 43% growth in television viewership in week 13 since January 2020. This spike in viewership is an opportunity for advertisers to reach more viewers and hence the free commercial time (FCT) has also increased for most genres.

Comparing the FCT from pre-COVID time (11th Jan- 31st Jan) to week 13 (28th March- 3rd April), we have seen that there is an overall growth of 9% across genres in FCT. Sports channels have recorded the highest growth of a whopping 86% despite the absence of live sports events.

The growth in FCT is followed by business news and news channels at 44% and 26% respectively. Movies and Spiritual channels also got 5% and 11% increase. In absence of new episodes of daily soaps, the general entertainment channels managed to garner a 2% hike in FCT by bringing back old classic shows.

However, all genres haven’t seen an increase in FCF. Youth channels have registered a sharp 21% decline while the Lifestyle genre also saw a 15% reduction in FCT. Music and Kids channels also reduced their free commercial time by 8% and 4% respectively. FCT on Infotainment channels too rescued by 2%.

During the Coronavirus crisis, India has seen 66 folds rise in social advertisements by governments and NGOs which were mainly to boost social awareness. Brands related to cleanliness such as Dettol, Lifebuoy Toilet, Harpic and Lizol were the biggest advertisers in week 13.

TV Consumption increased by 43% in India