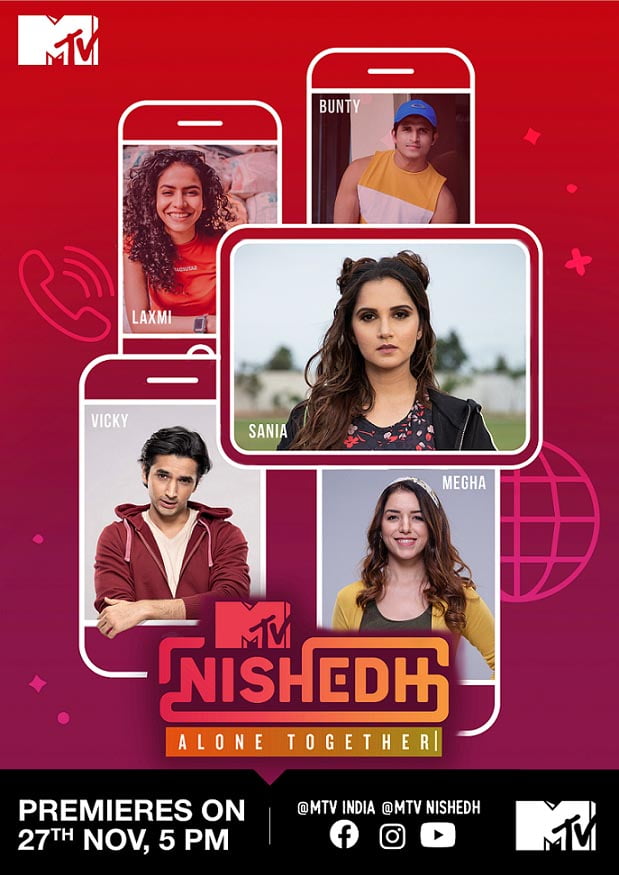 Viacom18 and MTV Alive Foundation are brining back a digital only mini-series MTV Nishedh Alone Together after withnessing the ground-breaking performance of Phase 1 of MTV Nishedh campaign that reached over 10 million plus people across India.

The mini-series is being brought back supported by an educational grant from Johnson & Johnson Services. MTV Nishedh Alone Together will focus on raising awareness about TB in India among young people – who represent just under 40 percent of all new TB cases while stressing the importance of seeking proper diagnosis and care. The 5 episode mini-series will stream on YouTube, Instagram, and Facebook handles of MTV India and MTV Nishedh starting every Friday from 27th November 2020 onwards.

A digital spin-off of MTV Nishedh which premiered in January this year, MTV Nishedh Alone Together will see Sania Mirza champion the important social cause and make her digital debut on the mini-series who will be joined by Priya Chauhan, Syed Raza Ahmed, Himika Bose, and Akshay Nalawade.

“We believe that meaningful content, when delivered in an entertaining format to mass audiences, can go a long way in driving instrumental impact. Amidst the COVID-19 pandemic, health and wellbeing has taken forefront in our lives; however, we still choose to shy away from conversing about TB – the world’s leading infectious killer. A global modelling study has suggested that, with every month of the lockdown, TB is expected to claim an additional ~70,000 deaths in India during 2020-2025.  Thus, the timing couldn’t be more appropriate to engage our audience through entertainment on social media to create awareness of TB in the times of COVID.”

MTV Nishedh Alone Together has been completely shot-at home series captures a journey of a young couple who brave it through professional challenges amidst the lockdown.

Georgia Arnold, Executive Director of the MTV Staying Alive Foundation stated, “MTV Nishedh saw positive results in sparking conversations around taboo topics including tuberculosis and the stigma around it. Through MTV Nishedh Alone Together, the aim is to continue this conversation and more importantly help those who may be suffering from symptoms of TB to ensure that they know where to go to get tested, and to continue accessing their meds during the pandemic. We want people to know that there is always help available for them and they should never give up on themselves, no matter how dark the times may seem.”