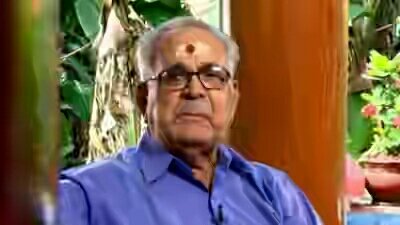 Veteran Malayalam actor and Kathakali artiste K N Jagannatha Varma passed away at a private hospital in Trivandrum on Tuesday. He was 77 years old. According to sources from the hospital, the actor had been hospitalised on Sunday morning for pneumonia and had a fatal cardiac arrest on Tuesday 8.30 am.
Varma, who joined Kerala Police in 1963 had retired as Superintendent of Police before joining in films. Apart from being an accomplished Kathakali artiste, he was also a percussionist, skilled in chenda.

The 'Lelam' fame actor made his film career through A Beem Singh's 'Mattoli' and gave life to numerous characters in the tinsel town in around 200 films. He was lauded for his roles in the films 'Praja', 'Pathram', 'Aaran Thampuran', 'New Delhi', 'Nakshathrangale Sakshi', 'Anthapuram' and 'Sreekrishnaparanthu'.

Varma was a prominent face in television soaps also after his small screen debut through 'Kairali Vilasam Lodge' on Doordarshan in 1996. Prior to his demise, he was active in a television serial 'Mangalyapattu' which is aired on Mazhavil Manorama.
He leaves behind his wife Santha Varma. The couple have a son Manu Varma, an accomplished television actor, and a daughter Priya. Malayalam movie director Viji Thampi is his son-in-law.

Y
Sad News Jean-Marc Vallée, director of ‘Dallas Buyers Club’ has sadly passed away at the age of 58.