So 3100 crores in Ad Revenue. Subscription revenue would have been another 700-800 crores or even more as well. Hotstar alone added 1 crore+ subs in September alone. Good for them.

Saichaitanya4496 said:
So 3100 crores in Ad Revenue. Subscription revenue would have been another 700-800 crores or even more as well. Hotstar alone added 1 crore+ subs in September alone. Good for them.
Click to expand...

Yeah that's true! That's pre NTO. Now most people are subscribed to only one of the Star Sports channels. Thats one of the reasons to have low sub revenues compared to 2018 per say.

For example if we take like Star Sports have like some 20 crore household subs and it's costing around ₹12 per sub (Averaging out bouquets and Standalone subs). 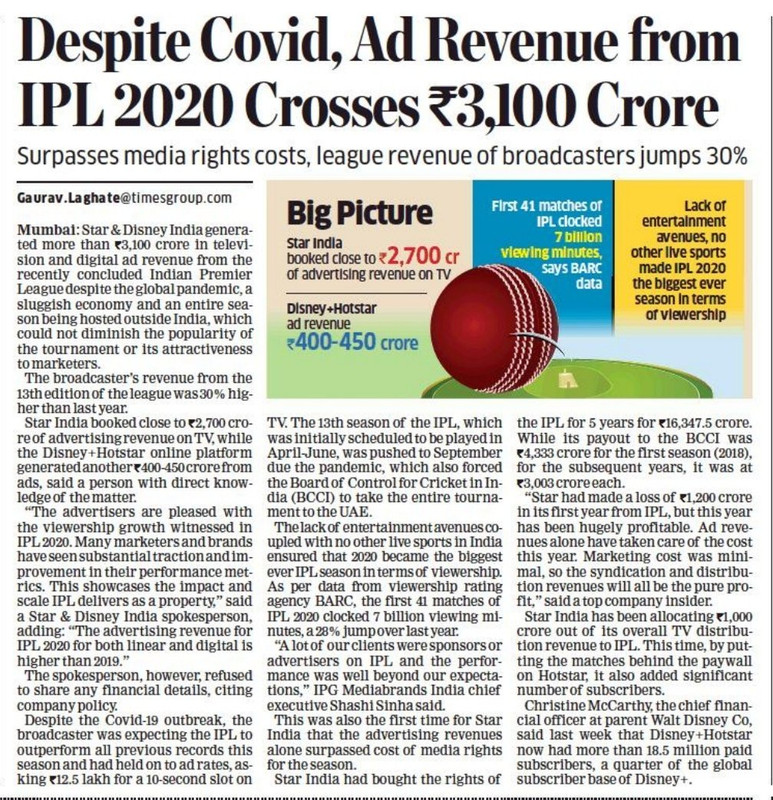 See this is how it pays off to have IPL during festive season.

coolwater0055 said:
Hope Disney re look at it and bid for the event in 2022 or else Sony will have a cake walk
Click to expand...

DJ Roy said:
See this is how it pays off to have IPL during festive season.

But it again won't happen IPL in October November months, Next year 2021 lot's of Cricket Events happening in India and All these Good for Disney/Star to Recover Acquisition Cost, Bad for Sony Sports and Most of Advertisement Agencies moving to Star, Because Most of Cricket Events in India.

DJ Roy said:
See this is how it pays off to have IPL during festive season.

Yes even i was thinking same but considering other crickets events around festive seasons IPL in festive seasons never happened but they should really consider "IPL in festive season"
Every year only bigg boss nd kbc cashed on festive season but this year ipl proved that festive season's ad revenue never reached its potential till this year
Broadcasters should really consider big events during festive season specially star
Btw one more thing i noticed during this ipl is GEC's(whether its regional or hindi) viewership not affected by ipl even by inch! many gec rised during this period.....even hindi gecs fictions trps also not affected by ipl moreover new launches during ipl got really decent rating which never happened during last 12 ipls plus fictions ratings always used to gets affected by ipl whereas shows like anupamaa reached 3.5 which is peak rating for any gec after lockdown
Only affected shows are KBC ,Bigg boss hindi, Kapil sharma show whose target audience(younger audience nd males) overlaps with ipl
So i think IPL during festive season is not bad deal.....star recovers money nd makes profit nd other GEC's viewership also dont get affected by ipl
Last edited: 19 Nov 2020