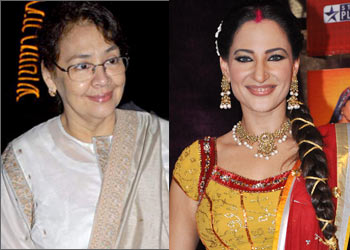 Ammaji Ki Galli is upcoming Comedy show on SAB TV. The show is set against the backdrop of Delhi. ‘Ammaji Ki Galli’ has a close similarity with Sony SAB’s show ‘Lapataganj’. The new show also presents the life style of people, especially Punjabi of a famous lane called ‘Ammaji Ki Galli’. Veteran Farida Jalal and Rakshanda Khan are all set to make a comeback with Sony SAB’s Ammaji Ki Galli.
Produced by Contiloe Films. Both the channel and the production house are trying to make it look as authentic as possible and the initial shoot will take place in Delhi. Confirming the news, veteran Jalal said, “Yes, God willingly I am doing the show. I can’t divulge much except for the fact that the show is set against the backdrop of Delhi. This is a beautiful concept and you have to watch the show to know more about it.” Khan said, “Nothing is confirmed as yet.” After capturing the viewership from the west, SAB is now trying to tap the viewership from the Northern region of the country. We are looking forward to see the on-screen camaraderie of Rakshanda and Jalal.