If they don't reduce their prices even after TRAI warnings, then we will watch the programs the next day on their respective apps. We will enable adblocker in Firefox and then watch.

rahul78X said:
I also thought while making my packs but at last the price of one or two channels which I wanted as A-La-Carte was more than or very close to the price of bouquet.
Click to expand...

Yeah.. that's how they are playing with our minds. This was explained by Siva bro in the first post:

Broadcasters started offering bouquets at a cheaper price than that of a single channel that is part of a bouquet. TRAI has highlighted several such bouquets in the revised order and I have listed a couple of them below. 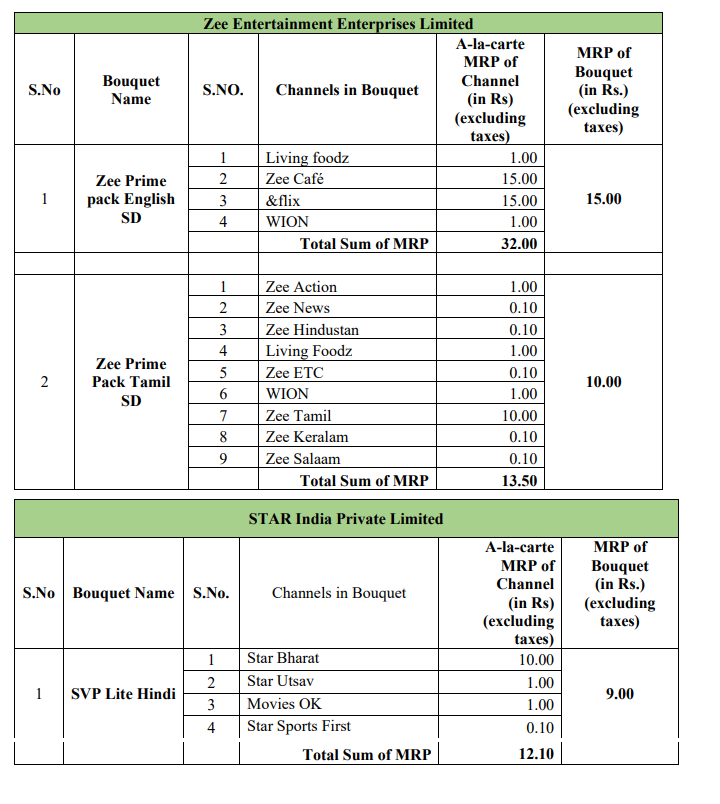 If you look at the above examples, in the Zee Prime Tamil pack SD, the popular channel Zee Tamil which is individually priced at 10 rupees is being offered as part of the bouquet, which is also priced at 10 rupees. Any normal customer would think that he is getting a higher number of channels at the same price and would go for the bouquet. However, in reality, he/she is being denied the choice of selecting the channel he/she wants due to this type of pricing. The same is the case with the bouquets like SVP Lite Hindi and many others.
Click to expand...

*I am a big cricket fan, but I did not see a single match IPL. Last ICC world I have just seen the final match in my friend house. I have requested my wife & mom not to see star jalsa & zee bangla & star plus which r rs 19, and they have agreed, my kids only see discovery kids, and see the highlights the match in SSF. dats it.
* I think - broadcaster main source of revenue just from ad sponsorship not for just Rs 19. Though rs 19 not a small amount if it is multiple by some big figures of 10 lakhs or 20 lakhs home

Ashok Varma said:
If this news confirms by top 4 broadcasters, then our tv bill going to be Big Bang from March2020. So, all of us stick to boycott the premium channels of every broadcaster.
Click to expand...

If the consumers stay united and boycott the premium channels (if they make them a la carte and price them at 25 rs), then the broadcasters will be brought down to their knees.

Post NTO, I have reduced TV watching a lot. Watching only sports channels now and am subscribing to them on a daily need basis. I actually end up subscribing to on the average 1.5 channels a month. So that turns out to 33 rs per month. I have also avoided using my secondary TV too and put that connection in suspended mode for the past 2 months. My TV subscription price now has come to around 190 rs per month.

It is not that I can't afford to pay the broadcasters, but I don't want to fill their coffers when they are misusing the NTO. To me if a channel is pay channel, then it must be ad free.

Will the broadcasters take TRAI to court on the new amendments?

RaviCSK said:
Will the broadcasters take TRAI to court on the new amendments?
Click to expand...

Just shocked on Vijay TV's pricing difference between old and NTO.
Have to write to TRAI, how to get the old TV antenna, which receives DD signals. Is that technology still available. Someone......

Mathan810 said:
Have to write to TRAI, how to get the old TV antenna, which receives DD signals. Is that technology still available. Someone......
Click to expand...

You can just get DD Free Dish.

Prithi Deb said:
Yeah.. that's how they are playing with our minds. This was explained by Siva bro in the first post:
Click to expand...

True. I want to go for Colors English channels on ala carte but was swindled to take their bouquets due to the illusion that there are more channels for relatively cheaper price. Anyway, I don't watch most of the channels in the bouquet. I also went with Zee Prime English due to the overpriced Zee English channels in ala carte. If the prices are reasonable, customers will choose ala carte instead of bouquets
18 More Posts...

What are some good steps TRAI should take for welfare of television viewers?

Discussion Did you benefited from TRAI's new tariff order?
2 3