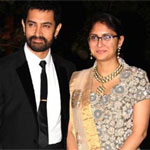 Mumbai: He can rightly be called the man with the Midas touch. Aamir Khan has not only been a prolific actor and director, he has been an astounding script writer as well. He has penned some exemplary scripts in the past and buzz has it that the man is all set to don the script-writers hat once again.

Aamir proved his writing prowess very early in his career when he came up with an excellent story for his debut film ‘Qayamat Se Qayamat Tak’. He further wrote the screenplay for ‘Hum Hain Rahi Pyar Ke’ and now he prepares again to wield the magic of his pen with a new script.

Talking to media, Aamir divulged his plans and said, "I intend to work once again as a writer. I have been co-writing a script with Kiran, Mansoor and Nuzhat. We start next month."

Extremely passionate about the film, Aamir chooses to give out only limited information, "It is originally my idea which I discussed with the rest. But the process is still in a very early stage."

He said that the script will belong to the mainstream genre. But he does not rule out further participation in the project.

He added, "Hopefully I will be acting in the film." Some of his most recent films like ‘Peepli Live’, ‘Dhobi Ghat’ and ‘Taare Zameen Par’ have all been offbeat films.

Interestingly, Aamir does not want to direct this project. His better half Kiran will occupy the director’s chair.

As far as the production is concerned, Aamir said, "If the script gets locked in another four to five months, then I can confirm it in another six months."
zn