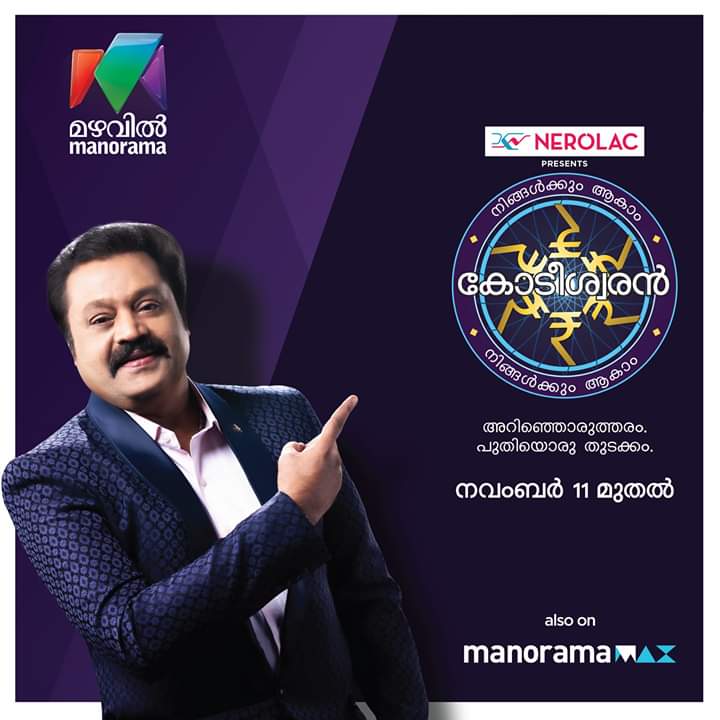 As the TRP race is becoming tighter, Mazhavil Manorama, the leading Malayalam GEC from Malayala Manorama group is launching 4 brand new shows this week. The channel will go for a major content refurbishment along with the new launches. ‘Ningalkkum Aakam Kodeeshwaran(NAK)’, the Malayalam version of ‘Who Wants to Be a Millionaire’ is the trump card among the newly launching shows, besides 2 fiction and one non-fiction is ready to go air.

‘Ningalkkum Aakam Kodeeshwaran’ will start airing from November 11, Monday to Thursday at 9 pm IST. Malayala Manorama Television (MMTV) acquired the broadcasting and digital rights of NAK from Star India’s Asianet which had the previous four seasons. The show was a huge success then and Mazhavil Manorama is looking forward to the fresh season hopefully. Mollywood Actor and Politician Suresh Gopi will continue hosting the show.

‘Priyapettaval’ is another show which is a soap opera starts along with NAK, scheduled to air Monday to Friday at 10 pm.

‘Big Salute’  a stand-up comedy show is launching on November 15, Friday, Saturday at 9 pm. Prominent media person and actor Ramesh Pisharody was roped to host the show. He was the anchor of the most popular sitcom ‘Badai Banglow’ in Asianet.

The channel is bringing back their popular musical chat show ‘Onnum Onnum Moonnu’, which starts airing from November 17 every Sunday at 9 pm. Singer Rimi Tomy is hosting the show.

From November 11 two serials are changing slots. ‘Sthreepadham’ Monday to Friday, at 7 pm. ‘Thatteem Mutteem’, Monday to Friday at 8.30 pm. Mazhavil Manorama also plans to premiere the latest movies in the upcoming weeks.

MMTV recently launched an own streaming service ‘Manorama Max’. The newly launched shows will expand the content offering from the app too.

As per Broadcast Audience Research Council (BARC) week 11, Mazhavil Manorama is the second most-watched Malayalam GEC followed by Flowers TV and Surya TV. While Asianet is the market leader ever since with a major share, tough competition always happens for the second spot.

Malayalam market has become more competitive after the arrival of Zee Keralam from ZEEL. Zee has been able to enter its channel in rating charts within a shorter span. Zee Keralam is raising severe threats to others in prime time slots. GECs are compelled to bring more new shows in order to retain their viewership. Sun Network’s Surya TV also made a content revamp last month. The TRP war between Malayalam GECs seems to go higher in the coming days.