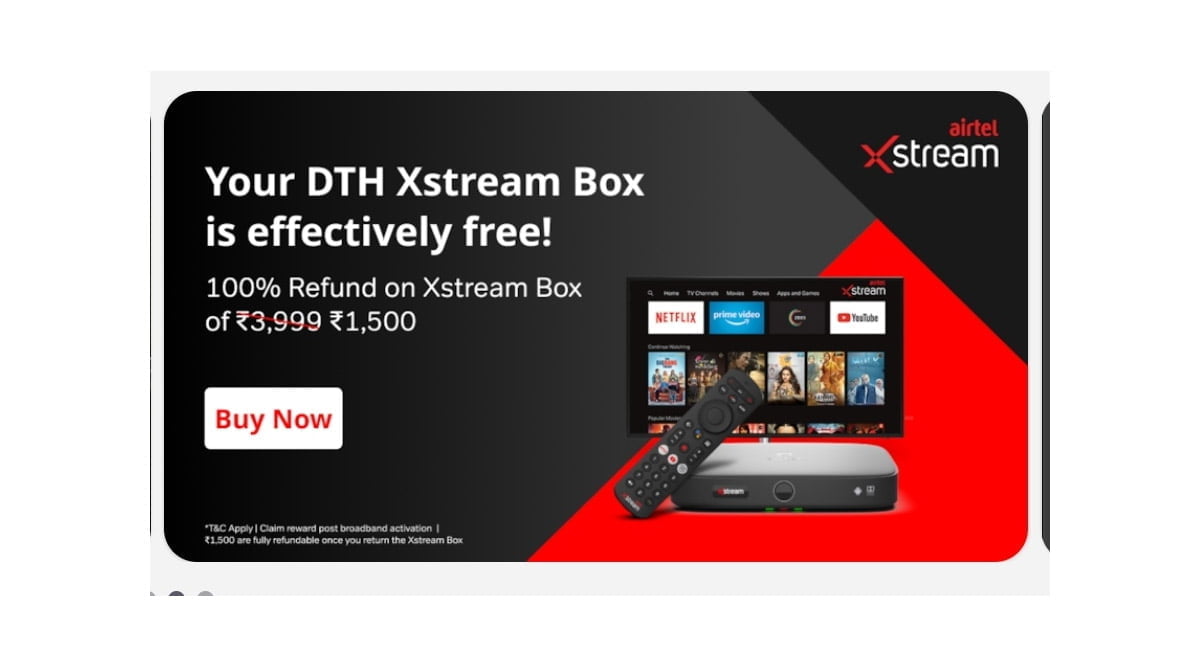 Starting Friday, Airtel Broadband users are seeing new tiles within the Airtel Thanks app promoting the Xstream STB on refundable basis offer. Airtel is marketing the offer as ‘Your DTH Xstream Box is effectively free!”. The update come courtesy of our community forum member Softsatish.

The tile within the app mentions that the reward can be availed post broadband activation. The said member in this case however already has a Airtel Broadband connection which is lying disconnected since over 10 days. While One Airtel Plan has been offering Xstream STB on a refundable basis since a long time, the said offer is a new one.

The new offer has been rolled out days after Airtel launched ‘Airtel DTH Online Recharge Dhamaka Contest‘, reduced the introductory offer on ‘Airtel Xstream Box’, and launched a new offer wherein it is offering 10% off on new connections paid online along with massive discounts on STB price if customers opted for 6 or 12 month pack.

Those eligible for the offer need to pay Rs 1500 as the refundable security deposit and Rs 451 as the first month rental. The total cost comes down to Rs 1951 with 3 months access to Airtel Xstream app and ZEE5. The monthly pack can be changed at any time later from the Airtel Thanks app.

The security deposit can only be availed back incase the Xstream STB is returned provided the customer fulfills Airtel’s conditions. Xstream STB users need to recharge continuously for 12 months with a minimum subscription pack of Rs 360 to be eligible to get the refund incase the STB is returned. In short, you shell out Rs 4320 in 12 months on top of the upfront Rs 1500 to be eligible for the refund. This is over and above the condition that the STB has to be in a completely working condition with no damage.

Incase, the customer doesn’t recharge for a continuous period of 3 months then the STB will be repossessed by Airtel with refund of security deposit dependent upon the damage and working defects in the STB. The customer will however borne the uninstallation charges.