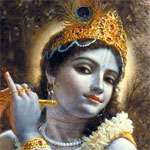 Mumbai: Much has been showcased about Lord Krishna`s birth, his mischievious childhood, the Radha-Krishna love story and how he killed his evil uncle Kansa. Now, a new show tells the story of Krishna as a ruler, a warrior, a master strategist and an ardent lover.

`Dwarkadheesh: Bhagwan Shri Krishna`, to go on air from July 4 on Imagine TV, will bring to the audience the grandeur of unknown aspects of Lord Krishna`s life, which earned him the divinity. The show is being made by Sagar Arts, who are known for giving hit historical and mythological shows like `Ramayan`, `Vikram aur Betaal`, `Sai Baba`, among others.

"Mythological and historical shows have always worked. Krishna as a god and as a character has a universal appeal and many shows have been made on him before. The biggest question for us was how to make it different from the previous shows, that`s how the whole idea came about," said Saurabh Tiwary, head programming (fiction) of Imagine TV.

"All of us know the story of Krishna who killed Kansa and played prominent part in `Mahabharata`, but no one knows what happened after that," he added.

Sagar Arts previously made two shows `Shri Krishna` in 1993 and `Jai Shri Krishna` in 2008. Both shows chronicled the life of Lord Krishna as a child and how he killed his uncle. The new show begins where the previous ones end.

It will tell the story of Krishna as a warrior, who defeated evil Jarasandh 16 times, an ardent lover who whisked away Rukmini from her Swayamvar, the dependable brother who got his sister married to Arjun. He was also known as the master strategist who guided Arjun to the path of victory.

The makers promise that `Dwarkadheesh...` will be grander than their previous shows. The whole city of Dwarka has been brought alive in Vadodara through sets.

"Dwarka is considered to be a city of gold. So we created everything in gold. The outdoor sets are tall and there are three to four huge palaces. The sets today are on much, much bigger scale than previous shows," Moti Sagar of Sagar Arts told reporters.

The makers have tried to introduce some changes which they believe will take the show to new heights.

"We have gone ahead with so many new things that we couldn`t afford before. The costumes and jewelleries have been created with semi-precious stones and pearls with elaborate embroidery," said Sagar.

"Casting for Krishna was the most difficult part, it took a lot of time. We conducted various auditions but we were not satisfied. We auditioned around 20-25 candidates and then came down to three and finally we zeroed on Vishal. Age wise and face wise, he fits the bill. He had to go through almost 10 screen tests," said Sagar.