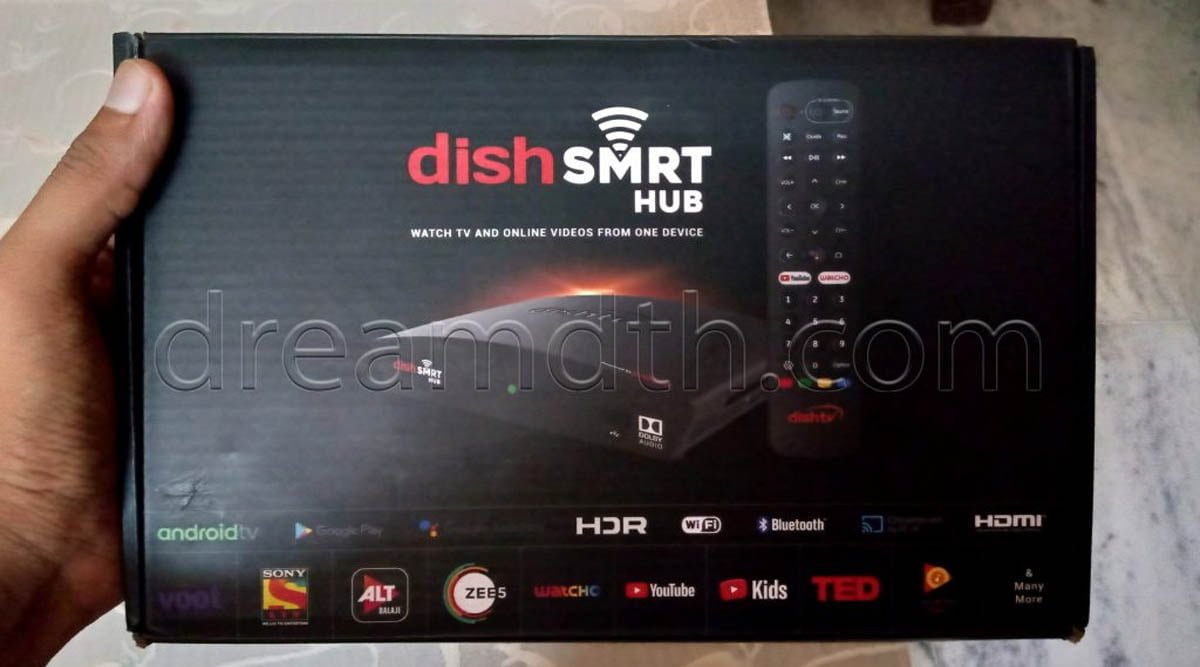 Earlier this month Dish Tv announced the launch of two new products, namely the Dish SMRT Hub and the Dish SMRT Kit. The SMRT hub is a hybrid set-top box which offers a combination of live DTH Tv viewing along with the ability to stream videos on OTT platforms whereas the SMRT kit is a plugin for the existing DishNXT set-top box to make it capable of streaming videos from OTT platforms. DreamDTH was the first to publish a hands-on review of Airtel Xstream hybrid STB and we are continuing the trend with Dish SMRT Hub.

One of our forum members ‘Deep.S’ has shared his hands-on review of this product with us. The size of the SMRT Hub STB is the same as Dish NXT HD STB but the build quality is slightly inferior to it. The front side has the Dish SMRT Hub branding along with the Dolby Digital logo. The backside has coaxial input, HDMI out port, AV out port, Optical audio out, USB port, Ethernet port and a port for the power supply.

The STB comes with a 1GB RAM and 4.7 GB internal storage. It runs on Android 9.0 Pie and comes pre-loaded with apps like Amazon prime video, Watcho, Youtube, Voot, Zee5, Sony Liv, Alt Balaji and also has the Google play store which can be used to install more apps. It also has built-in Chromecast which can be used to cast video content using your smartphone and Miracast feature to allow mirroring of your smartphone to the Tv.

The remote has dedicated buttons for Youtube and Watcho apps. It has a button for Google assistant which allows controlling through voice commands. It has universal remote function for power and source buttons to control the Tv as well.

The user interface is better than dish NXT HD and very similar to Airtel Xstream STB. The interface is fluid and offers an easy switching between live and on-demand video content. It supports multiple user profiles and can be controlled using your smartphone through the android Tv remote app on android phones. Internet-based streaming of live Tv channels is also available through the Watcho app. Picture quality & Audio Quality is Same as Dish NXT HD.

The SMRT hub is available for Rs.3999 for new users and Rs.2499 for existing users upgrading from HD STB. It comes with 1 Month Free Subscription of Super Sports HD Pack + 1 Month Free Comedy Active & Ayushmaan Active Service. After One month completion, your pack & service will automatically be dropped from your dish Smrt hub account. Access to the android apps is available for only as long as you have a DTH subscription active in your account, in the absence of which you will receive a low balance error.