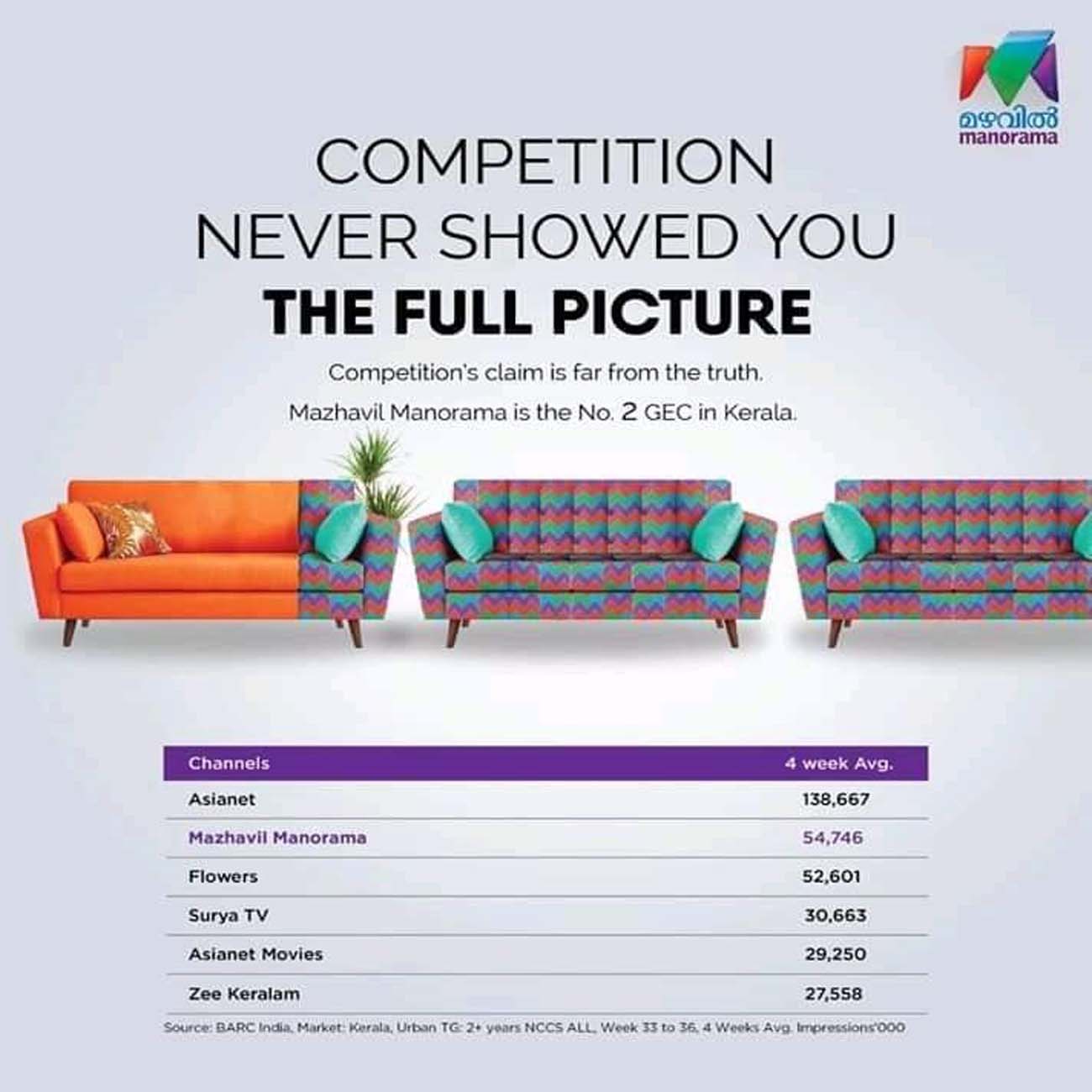 Launched in November 2018, Zee Keralam, Zee Entertainment Enterprises’ foray into the Malayalam sector, has taken time to take off in the ratings chart, as it struggled to enter the top five channels in the BARC ratings for many months. However, it has steadily built an audience for itself, and the recent festival of Onam last month (September 2019) provided the channel an opportunity to show its achievements in the Malayalam GEC space.

What was not expected, though, was for the newcomer to openly mock established competitors like Mazhavil Manorama and Surya TV. Zee Keralam released an advertisement during Onam that not only showed its growth as a Malayalam GEC, but specifically pointed out Mazhavil Manorama, and put up a picture of a sofa largely coloured orange (the colour of channels such as Zee Keralam, Zee TV, Zee Tamil and Zee Telugu), with a small portion coloured in a pattern of ‘M’s, implying Mazhavil Manorama, as it has a colourful ‘M’ in its logo.

Mazhavil Manorama would not take it lying down, though, as it issued not one but two counter-attacking ads targeted at Zee Keralam. One ad showed two more sofas coloured in the channel’s colourful pattern, as it claimed to show the ‘full picture’ of the BARC ratings, putting itself in second place while also placing Zee Keralam last.

Another ad put out by Mazhavil Manorama highlighted its logo that consists of seven colours, compared to the single orange colour used by Zee Keralam, seemingly suggesting that Mazhavil Manorama has a much more attractive programming schedule.

But Zee Keralam is unwilling to admit defeat. It has released another ad that attacks the Sun network’s Surya TV this time, saying that Zee Keralam, which is not even a year old, has leapfrogged the 21-year-old Surya TV (launched in 1998) in the BARC ratings. The ad features a blooming flower with the Zee Keralam logo, and another, withered flower with only two petals, which has obviously been taken from the logo of Surya TV and other channels of the Sun network.

Such comparative advertising happens all the time in any industry, especially the Indian TV industry, and most especially among news channels, who selectively choose rating data to portray themselves in the best possible light. Things have come to a point where no one cares whether ABP News or Aaj Tak is the most-watched Hindi news channel, or whether Republic TV is ahead of Times Now. Yet channels and networks continue to do it.

What is surprising, however, is the fact that such mocking ads come from Zee. The broadcaster has traditionally congratulated other networks for their achievements. In 2017 alone, the Zee network expressed its goodwill towards a competitor twice: in April when Sun TV was celebrating its 25th anniversary, when Zee Tamil congratulated it; and in October, when the Zee network celebrated its own 25th anniversary by thanking competing networks like Star, Sony, Sun and Viacom18 for helping it to stand where it is today.

But Zee Keralam certainly seems to think differently. As the channel finds its footing, it is clearly adopting an aggressive strategy to challenge its competitors, including the more popular ones like Asianet and Flowers TV. But it may end up provoking Asianet, the king of the Malayalam market, which is owned by the Star network. Asianet’s dominance is reiterated in this video below, released four years ago (August 2015) when it launched an HD feed, thereby becoming the first Malayalam HD channel, the first regional HD channel from the Star network and the first regional HD channel not from the Sun network. If Asianet or Flowers TV gives a counter-reply to Zee Keralam, the newcomer might be headed for big trouble.

Will Zee Keralam’s strategy of openly attacking its competitors work in its favour, or will it simply alienate its viewers? Only time will tell.