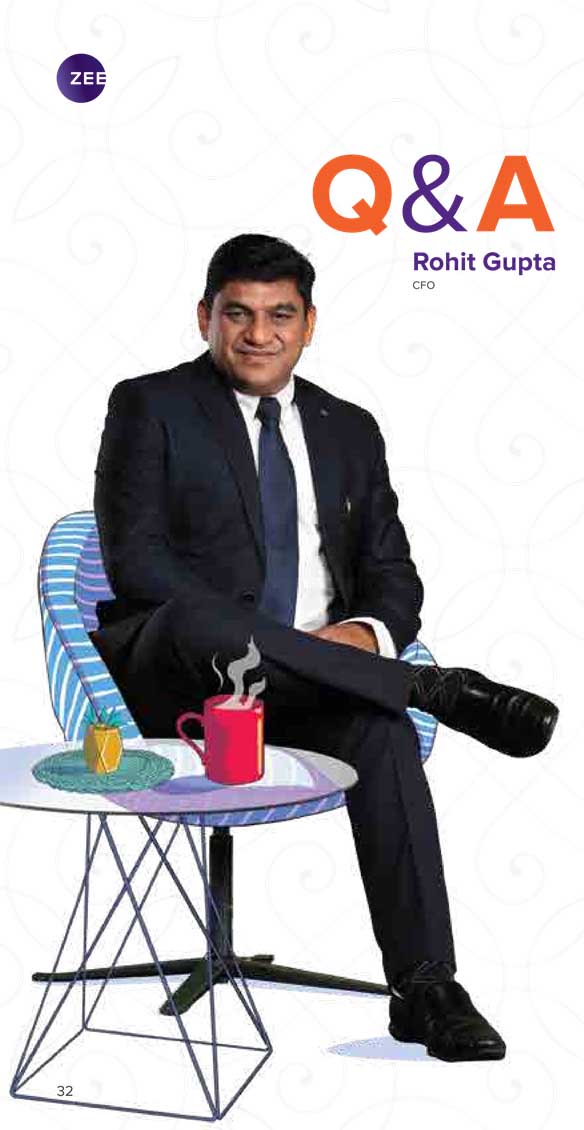 Zee Entertainment Enterprises Limited (ZEEL) CFO Rohit Gupta in a Q&A session last week to his own network answered questions on a range of topics. Rohit Gupta, who joined ZEEL as CFO in September 2018 answered questions relating to the broadcaster’s FY19 performance, increase in domestic advertising revenues, acceleration of subscription revenue in FY19, implications of the TRAI tariff order on subscription revenue growth along with the company’s growth and investment outlook for new businesses and initiatives. He also discussed increasing content cost, ZEEL’s increased investment in movie buying and the sharp increase in working capital.

How was ZEEL’s financial performance in FY19?

We are happy to deliver yet another year of industry-leading performance. During the previous fiscal, our revenues grew by 18.7% YoY, led by strong operating performance across all businesses. Advertising revenues for the year grew by 19.8% driven by the viewership share gains in domestic broadcast business and monetization of ZEE5’s fast-growing user base. Subscription revenues grew by 13.9% during the year. While international subscriptions remained largely stable, domestic pay revenues witnessed a growth of 17.4%, led by improved monetization of phase-III markets. Our movie production and distribution vertical drove a strong 30% growth in other revenues. Our FY19 results are consistent with the performance over the past five years.

Could you elaborate on factors driving strong growth in domestic advertising revenues in FY19? What is your outlook for advertising growth?

During FY19, domestic advertising revenues witnessed a growth of 20.9% led by traction in both television and digital businesses. Our domestic broadcast business gained another 170bps viewership share led by the regional and movie channels. We became the leader in Bangla and Kannada markets and further strengthened our share in Tamil Nadu. This helped us to improve our monetization and grow ahead of the industry.

Additionally, advertising revenues from ZEE5 contributed to growth. During the first three quarters, growth was relatively stronger at 22%, helped by a low base and increase in ad-spends by consumer companies. However, in the fourth quarter, the growth moderated as the advertisers reduced spends due to uncertainty related to the implementation of the tariff order. We believe that once the disruption is behind us, the ad growth will return to its normal growth trajectory. As ZEE5 continues to scale up, it would witness a concomitant increase in ad revenues as well. The movement of two of our FTA channels out of DD Freedish will have some impact on ad growth in the near term but we are working with our strategy to compensate for that revenue loss through other channels. Our endeavor is to continue growing ahead of the industry.

Our domestic subscription revenue growth stood at 17.4% in FY19, a significant acceleration from the previous year. The growth during the year can be divided into two parts – a strong 22.5% growth during the first nine months and a muted fourth quarter. During the first nine months, we benefitted from the monetization of the newly digitized phase III markets. However, during the fourth quarter, the implementation of the long-awaited TRAI tariff order negatively impacted the growth. That said, ZEEL has seen satisfactory uptake of its channels and bouquets. We are positive that once the impact of the regulation settles, subscription growth will revert to its normal course. Our medium-term guidance on domestic subscription revenues remains unchanged.

Content costs have seen an increase in FY19. Is the company seeing content cost inflation, especially in the digital business?

In FY19, our content cost increased by 21.7% YoY, slightly ahead of revenue growth, resulting in our content cost-to-revenue ratio going up by 100bps to 38.8%. Three factors contributed to this increase – ramp-up of ZEE5 Originals, higher movie amortization costs, and an increase in the content cost of Zee Studios. To understand the cost inflation, we can divide ZEEL’s content into three categories. First, fiction and non-fiction show for our television audience, which accounts for a substantial portion of our total content cost. Cost per hour for this category is growing in line with inflation.

Second, original content for our digital platform, ZEE5. The cost of ZEE5 Originals is increasing significantly as we are ramping up production across 6 languages. In the digital business, higher talent cost and amortization of fixed costs over fewer episodes push up the cost per hour. Though ZEE5 produced 50+ original series/films till Mar-2019, it is still a small proportion of our total content bouquet. Lastly, the acquisition of movie rights for both broadcast and digital businesses contributed to cost inflation. While the cost of satellite rights has not witnessed a substantial change, the price of digital rights, especially for blockbuster movies, has seen a steep increase.

We are using our network strength to optimize the cost of buying movies by entering consolidated deals that include music, satellite, digital and international rights. Keeping in mind the increase in competitive intensity for movie acquisition and our stated focus on this genre, we have stepped up our investments in this space. During the year, we entered into several new contracts for output deals and future rights with movie producers and content aggregators.

What is the growth and investment outlook for new businesses and initiatives?

At ZEEL, we continue to invest and scale up new businesses to widen our content offering. Our new businesses – digital, movies and music, and live entertainment have gained traction during FY19 and are heading in the planned direction. ZEE5 completed its first year of operations and the platform has witnessed a very encouraging response. ZEE5 released 50+ original series/ movies to become the largest digital content producer in India. Investments in digital will further increase as we ramp-up production of ZEE5 Originals and movie offerings across languages.

Our domestic broadcast business is preparing to launch movie channels in regional markets for which we have been building a library for some time. Incremental investments in the domestic broadcast would be limited. These content and marketing investments are expensed above EBITDA. Despite these investments, the company expects to maintain healthy margins.


ZEEL has stepped up its investments in movie buying. Could you please explain the rationale behind this strategy?

We have identified movies as an integral part of our entertainment bouquet and have been increasing our investments in this genre over the past two years. The rising viewership of movies and their ability to attract youth and male audiences make it an attractive investment proposition. A strong movie library helps four of our five businesses – domestic broadcast, digital, movies & music, and international. During the past year, our movie channels in India have garnered the highest viewership share and registered a strong revenue growth. We will expand our movie offering by adding three channels to the existing bouquet of thirteen.

Movies are also one of the key drivers for ZEE5. Digital premiere of movies like Simmba and Uri: The Surgical Strike has led to an increase in paid subscriber base. Our strategy of investing in movies is panning out as per our expectations and is strengthening our value proposition for the consumers. Accordingly, we have decided to further ramp-up investments to consolidate our strong position in this genre. With a view to quickly expand our movie library, we have increased our engagement with content aggregators and movie producers. These arrangements will enable us to lock-in movie libraries coming up for renewal at a future date and movies which are currently under production. At ZEEL, we see our vast movie library as a sustainable competitive advantage.

Working capital saw a sharp increase in the past three years which has negatively impacted free cash flow. When do you expect cash generation to improve?

The increase in working capital is primarily attributable to our strategy of building a strong movie library and scaling up of original content production for ZEE5. On the movie front, as indicated earlier, we have been aggressive in buying rights across languages and platforms. While these investments impacted working capital immediately, the revenues will accrue over a period once we start exploiting these rights. As a part of these investments is for rights that will come up in the future, it would reduce our need to spend on content acquisition in the coming years. On the digital original content front, we have built a strong slate with plans to release over 70 series/ films across six languages in FY20. Investments in movies and original content for ZEE5 will continue, however, as revenues from these businesses grow, we will start seeing an improvement in cash generation.