Sad News Recharge and due date issues with Tata Play

I recharged my Tata Play account on Rs. 200 on the Evening of 27th Jan.

Gpay confirmed the transactions, but amount Not credit in T Play account.

After Few hours, at 12:00 AM on 28th Jan, received confirmation that recharge is successful and amount will be credited shortly..but it didn't happened.

My Due date is 28th Jan, So all the subscribed channels has been dropped by T Play today. 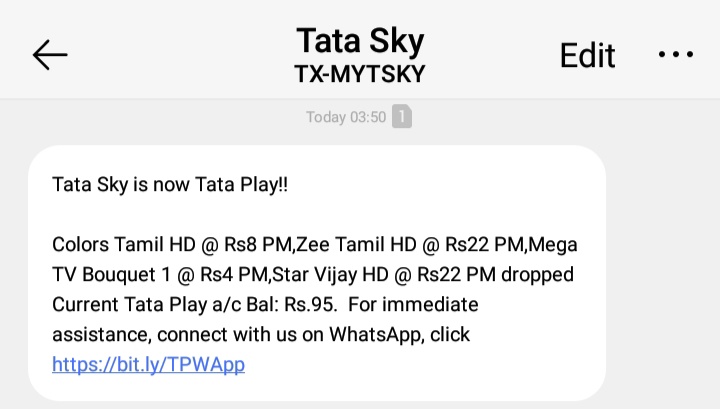 I have called CC today and raised complaint, but they said their is some issue in Tata Play and it's happening sometime, So, it will take upto 10 days to credit the amount in your bank account. Atrocious..

But, they said we will credit you some amount for 5 days(around Rs. 8) since my Monthly subscription amount is Rs.57 and they reactivated all the channels which i am earlier enjoying. This credited amount will be debited after 5 days..


So, I recharged my account with Rs.100 through Bhim app and it's got successful.

But the due date is showing incorrect..

When enquired with CC, they said this is due to technical issues...Again...Omg...

Never ever faced these type of issues in my association with Sun direct for the past 11 years.

Its really irritating..Still Rs. 200 not credited as well...
Last edited: 29 Jan 2022
Solution
Money will be refunded if they said recharge wasn't complete, don't worry about that. Regarding due date issue, if you are subscribed to any Jingalala offer it is counting price of those packs. You will see actual date after Rs 1 packs are dropped.
Sort by date Sort by votes

Money will be refunded if they said recharge wasn't complete, don't worry about that. Regarding due date issue, if you are subscribed to any Jingalala offer it is counting price of those packs. You will see actual date after Rs 1 packs are dropped.
Upvote 0 Downvote
Solution

You need to have patience when such things occur

What you faced happens to 1% of the customers due to some error.

They will fix it and your money will come back if it was not recharged.
Upvote 0 Downvote
D

@Chezhiyan bro can you tell me how are your monthly charges only rs 57 ?
Where are NCF charges ?
Upvote 0 Downvote
H

Either you subscribed to binge combo pack or jingalala offer pack... That's the reason your due date is showing is wrong..
From the screenshot i think you subscribed to a combo pack that's why your monthly charges.. 58 only.. So no need to worry... If you have sufficient balance on next renewal date of your pack... It will renew otherwise it will drop and changes to Normal pack.. Then the due date will change... You can view this details by clicking 'i' symbol in the monthly payable amount and recharge due on section
Last edited: 30 Jan 2022
Upvote 1 Downvote

donisback said:
@Chezhiyan bro can you tell me how are your monthly charges only rs 57 ?
Where are NCF charges ?
Click to expand...

He is on 6 months Thalaiva Pack, brought the connection bundled with that package and paid it's amount upfront. So now for 6 months he need to pay only for additional channels subscribed.
Upvote 0 Downvote

Amount credited into my bank account just now...Thanks all for your help...
Upvote 0 Downvote
B