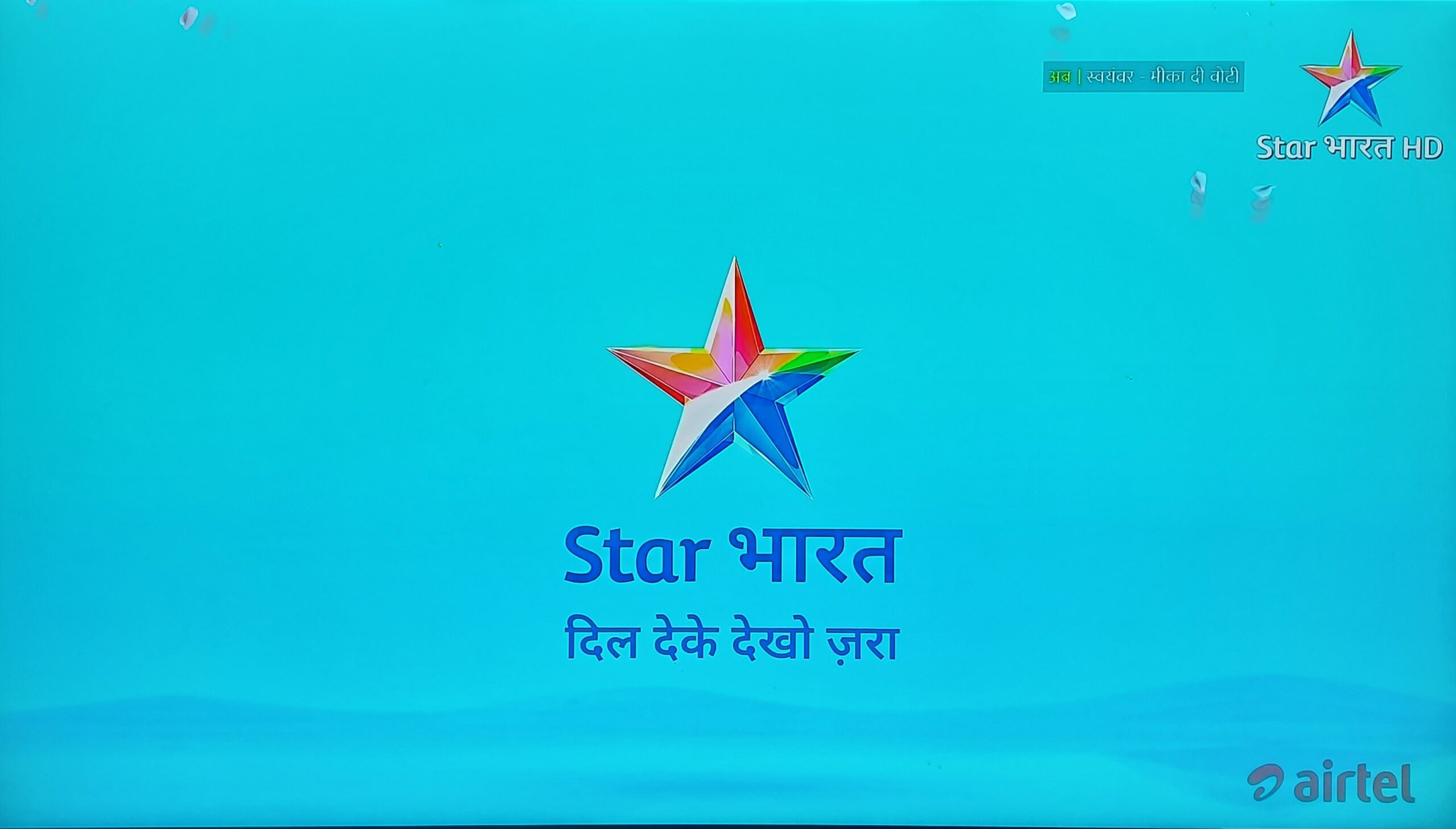 Its new slogan is Dil Deke Dekho Zara (Give Your Heart and See). This replaces the previous Bhula De Dar, Kuch Alag Kar (Forget Fear, Do Something New), which was introduced on 28 August 2017 when the channel was launched replacing the erstwhile Life OK.

While state broadcaster Doordarshan has been promoting the upcoming rebrand of its flagship channel DD National from Independence Day (15 August) for a few days now, Star Bharat’s rebrand comes out of the blue, as there was no announcement on the matter until some leaks were revealed today.

Now, the Star wordmark in the logo is no longer uppercase, but is now identical to the Star wordmark in the logos of Star Jalsha, Star Pravah, Star Suvarna and the broadcaster’s latest launch, Star Kiran. The new graphics package is based on colourful flowing saree-like textiles against a light blue background, the same colour that was adopted by Star Suvarna during its rebrand in late 2020.

Along with the new logo and graphics, it will introduce a handful of new shows. Star Bharat has introduced several new shows over the last few months such as Gud Se Meetha Ishq, Woh Toh Hai Albelaa and the reality show Swayamvar: Mika Di Vohti, as well as two new serials earlier this month, namely Bohot Pyaar Karte Hain and Channa Mereya. To this it will add two new serials from Tuesday (26 July) — Ajooni and Na Umra Ki Seema Ho — which will replace Swayamvar: Mika Di Vohti after its grand finale.

The channel has uploaded a few pictures on its social media pages regarding the rebrand and the new shows.

Content hide
1. Why hasn’t Star Bharat been a success story, unlike Star Plus?
2. Star Bharat’s suffering is a far cry from its brief DDFD outing and previous avatars

Why hasn’t Star Bharat been a success story, unlike Star Plus?

The fact is that despite belonging to the lucrative Hindi GEC genre, Star Bharat has not been able to command a large audience. It has almost always struggled in the shadow of its far more successful sibling Star Plus, which has been the number one pay Hindi GEC for the past several years, thanks to its hit serials (often with slightly idiosyncratic spellings) such as Anupamaa, Imlie, Ghum Hai Kisikey Pyaar Meiin and Yeh Hai Chahatein — not to mention the age-old superhit drama Yeh Rishta Kya Kehlata Hai, which has been running continuously since January 2009.

Its newer shows such as Banni Chow Home Delivery, Kabhi Kabhie Ittefaq Sey and Pandya Store have been successful too, and this means that Star Plus hardly needs to show any reality shows or movies, apart from the occasional Dance+ and MasterChef India. (However, some shows have been abruptly pulled off air, such as Chikoo Ki Mummy Durr Kei.) As noted in our article on the launch of Star Kiran, many of these are adaptations from Bengali serials that originally aired on Star Jalsha, and later adapted to the network’s other regional channels such as Star Vijay, Star Pravah and Asianet.

Through the years, Star Plus has remained far ahead of its competitors such as Zee TV, Colors, Sony TV and Sony Sab, while Star Bharat and the Zee network’s &TV have barely any impression on the BARC ratings chart.

These pay channels aside, there is also a gigantic viewing audience on DD Free Dish consisiting of a large number of free-to-air channels, chief among them being Dangal from the Enterr10 Network, which is not far behind Star Plus and its Telugu counterpart Star Maa in the list of top 10 most popular channels in the country.

There are several other such Hindi GECs on DD Free Dish, such as Shemaroo TV, The Q, Big Magic (from Zee), Azaad TV and more recent launches like Dangal 2 and Shemaroo Umang. However, some months back, the big commercial broadcasters’ dedicated Hindi GECs on DDFD — namely Star Utsav, Zee Anmol, Sony Pal and Colors Rishtey — were pulled from the platform (the second time this has happened since 2019, as described below).

Ironically, while Star Bharat languishes at the bottom of the Hindi GEC ratings chart today, it was once the biggest Hindi GEC on DD Free Dish, even ahead of Dangal. During its rebrand from Life OK in August 2017, it was added on DD Free Dish and, throughout 2018, remained one of the most popular TV channels in India for this reason. Shows like RadhaKrishn, Nimki Mukhiya and Jai Kanhaiya Lal Ki were bumper hits, and few could compete against Star Bharat’s runaway success.

But in March 2019, many pay Hindi GECs were removed from the platform, including Star Bharat as well as other rural-specific channels from big broadcasters (Star Utsav, Zee Anmol, Sony Pal and Colors Rishtey). Those four were readded in June 2020, only to be removed again in April 2022, but Star Bharat has never returned to DDFD.

One main reason for this has been the dilemma that the big four broadcasters (Star, Zee, Sony and Viacom18) have faced regarding whether to take advantage of the ad revenue through their channels’ presence on DDFD, or focus on the more steady revenue gained through pay-TV subscribers. Some pay platforms have pressurised the broadcasters to remove their channels from DDFD if they are to continue carrying those channels, resulting in their second removal in April.

In any case, neither has Star Bharat ever reappeared on DDFD nor have any of its shows been aired on Star Utsav — Disney Star’s rural-focused channel which was also among those removed this year. This is a far cry from Star Bharat’s previous avatar as Life OK, an urban-focused Hindi GEC that was launched in December 2011 and boasted of several hit shows like Devon Ke Dev… Mahadev, Kalash and May I Come In Madam?, as well as the long-running crime series Savdhaan India.

Life OK was far more successful in complementing the flagship Star Plus than Star Bharat has ever been since 2019. This does not even take into account the channel’s original name, Star One, which lasted from 2004 to 2011 and spawned several memorable shows including Sarabhai Vs. Sarabhai (briefly rebooted on the then-Hotstar in 2017).

Most of Star Bharat’s shows in the past year or so — such as Maan Kee Awaaz Pratigya 2, Sasural Genda Phool 2 (both of them reboots of old Star Plus serials) and Teri Laadli Main — have failed to last beyond a few months. Nor does the channel have any famous reality shows, and there are not many ‘flagship’ shows other than Savdhaan India. Clearly the audience has lost touch with what the Star Bharat brand stands for: to shed all fear and attempt the impossible. The fact that these serials barely generate any ratings does not help either.

In a desperate attempt to revive its ratings and positioning, Star Bharat has gone in for a rebrand with a new look and packaging. But will the rebrand help uplift its struggling fortunes? The answer is likely no. It has been advocated that the channel be brought back on DD Free Dish in order to generate more ratings (if not the dizzying heights of 2018), or otherwise shut down if it continues to generate losses for Disney Star. However, India’s largest broadcaster will not back down without a fight, and this rebrand is a show of support for the struggling Hindi GEC. Simply changing the logo and colours may not do much for Star Bharat’s fortunes, and it requires much more of the tenacity and doggedness that helped it survive in the past. Only then will the viewing public be able to resonate with what Star Bharat stands for.

Nobody cares. That channel is ruined the day they moved their urban audience base to rural. Otherwise Star had a great competitor in Life OK to SET and Colors.