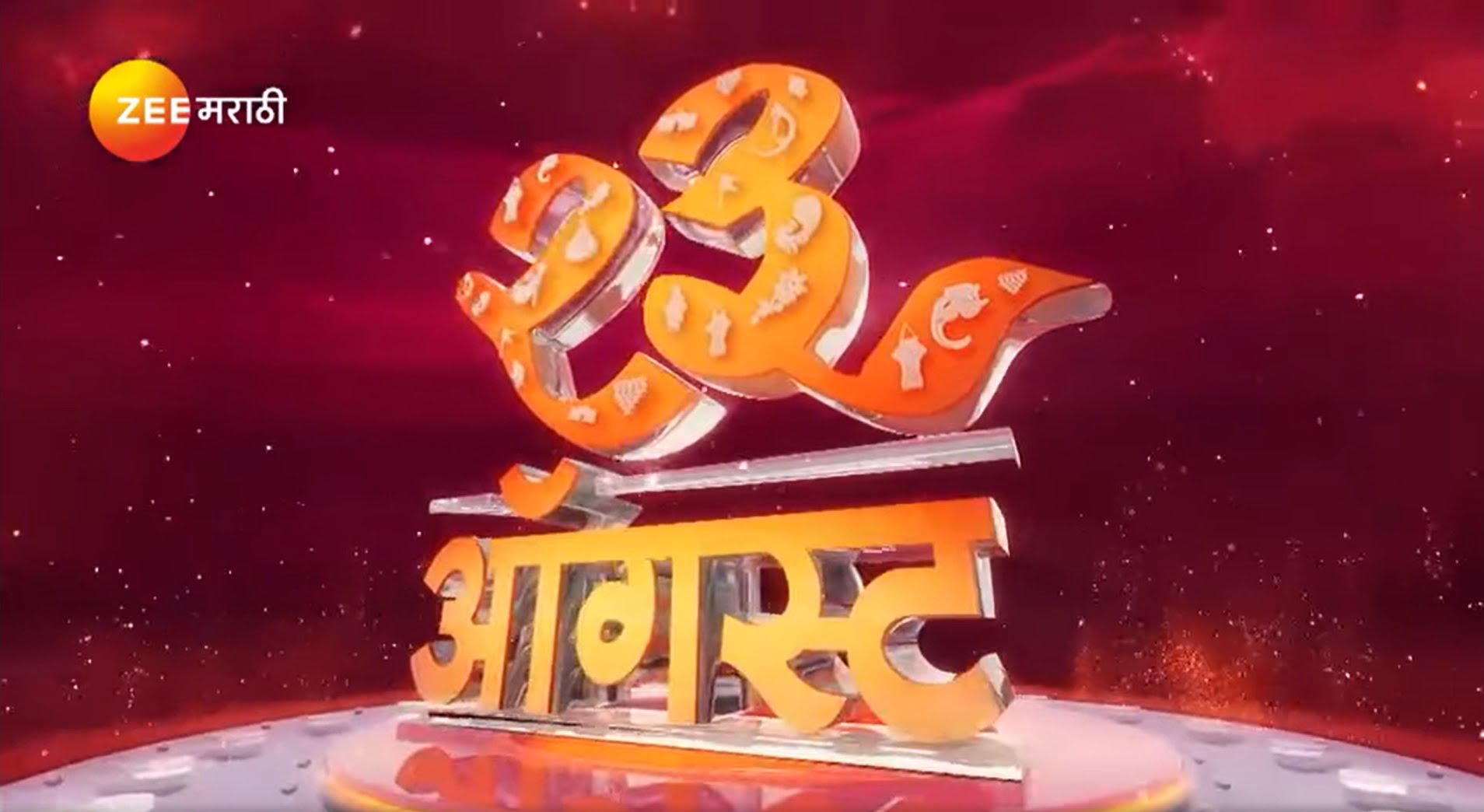 23rd August 2021 is set to be a Monday unlike any other, as not only are many Indian TV networks launching new shows on this day, but one channel is even going for a full-scale rebrand. Rarely have so many channels decided to launch new programs all on the same day, making it an interesting sight to watch.

Zee Tamil, meanwhile, is promoting the day as ‘Sweet Day’ on social media for the launch of its serial Ninaithale Inikkum, a remake of the Bengali serial Mithai that airs on Zee Bangla. It will air from Monday to Saturday at 7:30 pm. The channel had asked viewers on social media what day 23rd August would be, before revealing it as Sweet Day.

But none of them is going as far as Zee Marathi, which is undergoing a comprehensive brand overhaul as it approaches its 22nd anniversary. The oldest private Marathi GEC is transforming its brand image with a slew of new shows in the next few weeks, and it all starts on 23rd August when it is launching a new graphics package and brand positioning, as well as a slate of new serials. Two of these, Mazi Tuzi Reshimgath and Man Zal Bajinda, will be launched on the 23rd, with more in the following weeks. This comes after the channel resurrected its popular paranormal horror show, Ratris Khel Chale Season 3, on the 16th.

Earlier it was rumoured that many GECs of the Zee network such as Zee Bangla, Zee Telugu and Zee Kannada might be undergoing a revamp on the 23rd. In fact, there had been rumours that Zee TV might introduce a new graphics package and a recoloured logo since May, but those have proven to be false. It seems that only Zee Marathi will actually proceed with introducing new graphics, since it has not done so since 2014. Zee Marathi does not use Zee TV’s orange ripple graphics package that many of the other aforementioned channels have been using starting from October 2017, when a large-scale rebrand of the Zee network took place.

Not to be left behind, the Sun network’s Telugu GEC Gemini TV launched the much-anticipated fifth season of Evaru Meelo Koteeswarulu on Sunday (22nd August), the first time the Telugu adaptation of Kaun Banega Crorepati/Who Wants to Be a Millionaire is not airing on its original channel, Star Maa. This will be followed up by the inaugural season of MasterChef Telugu from 27th August. Though these shows are not starting from the 23rd per se, these indicate Gemini TV’s push for reality shows to boost its flagging ratings. On the 23rd, though, Gemini TV is launching a couple of new serials: Sundari and Kavyanjali, which will air from Monday to Saturday at 8 pm and 9:30 pm respectively.

Gemini TV’s Malayalam counterpart Surya TV is going in for a revamp with new programming. It is introducing a whopping five new shows this week, four of which start on the 23rd: three serials (Kaana Kanmani, Kanyadaanam and Manassinakkare), and two game shows (Anchinodu Inchodinchu and Aram + Aram = Kinnaram). While Anchinodu Inchodinchu is a remake of Kya Aap Panchvi Pass Se Tez Hai, itself the Hindi adaptation of Are You Smarter Than A 5th Grader?, Aram + Aram = Kinnaram is another new game show that starts this Thursday, 26th August. The three serials are all remakes of other serials of the Sun network, two of which have also been remade on Sun Bangla as Nayantara and Momepalok. Surya TV has been promoting all its posts on social media with the strapline Puthan prasarippode Surya TV (Surya TV with new programs).

Along with new shows, both Gemini TV and Surya TV are also introducing a colourful new look and graphics package to go with the revamp.

If there is one Hindi GEC that makes most of its viewership from its non-fiction shows rather than its serials, it would be Sony Entertainment Television or Sony TV. Having already revived The Kapil Sharma Show after a long hiatus on 21st August, it is set to return with Season 13 of Kaun Banega Crorepati on the 23rd, a day after its Telugu version goes on air on Gemini TV. Year after year, KBC has never failed to deliver on the ratings chart for a channel that is otherwise devoid of high ratings year-round. Expect the power of the Big B factor to be no different this year, especially with the reintroduction of live audiences and the audience poll.

Sony TV has always been heavily reliant on its marquee reality shows such as Indian Idol, KBC and Super Dancer, and soon Shark Tank India and India’s Got Talent are set to add to its diverse non-fiction portfolio, the latter having shifted from Colors. With the much-loved The Kapil Sharma Show also returning, the channel may be at the beginning of a prolonged surge in ratings.

Star’s dominance in many markets pushes the competition to desperation

Coincidentially, none of these channels is setting the ratings chart on fire, and none of them is from the Star network. That is because many Star channels are at the top of the ratings chart in their respective languages. Specifically, the two most-watched TV channels in India are Star Plus (Hindi) and Star Maa (Telugu), which have dethroned Sun TV, the longtime numero uno in the Tamil segment, and for many years the most popular channel in India. Other Star channels like Asianet (Malayalam) and Star Pravah (Marathi) are equally dominant in their respective genres, with a huge lead over the nearest competitor — as is Star Jalsha in Bengali, though it often trades the top position with Zee Bangla and the two have almost the same viewership.

Even the Star network’s Tamil GEC Star Vijay has done well to make a mark for itself outside the shadow of Sun TV, and has got a well-deserved position for itself in the list of top 10 Indian channels. Free-to-air Hindi GEC Star Utsav has also enjoyed a long run in the top 10, and Hindi movie channel Star Gold has witnessed a resurgence to the top within its genre. The one big flagship GEC of the Star network that may be said to be struggling is its Kannada channel Star Suvarna, which underwent a rebranding last November and has enjoyed a modest increase in ratings. Not to mention Star Bharat, Star’s other pay Hindi GEC, which has tried launching new shows to no avail and continues to scrape the bottom of the barrel.

It may be expected that channels as well-entrenched as Zee TV, Sony TV, Zee Tamil and Gemini TV, with such a large folowing and legacy, should also be among the most popular channels in India. Indeed they still do command a large viewership, but they are nowhere to be seen in the list of top 10 most popular channels in India. Competitors such as Star Plus, Colors and Sony Sab (Hindi), Sun TV and Star Vijay (Tamil) and Star Maa and Zee Telugu (Telugu) have been an established fixture in the top 10 for months.

As much as Zee Kannada, Zee Bangla and to an extent Zee Telugu have been successful for Zee in recent months, Zee TV, Zee Marathi and Zee Tamil have been hit hard by the exodus of viewers and the dominance of Star in their respective markets (though in Tamil, Star Vijay is still a long way behind Sun TV). For the Sun network too, Sun TV is the one channel that is a leader, whereas all its other channels — Gemini TV (Telugu), Udaya TV (Kannada), Surya TV (Malayalam) and Sun Bangla — have been doing very poorly in comparison to the corresponding Star channels, except Kannada where Zee Kannada is the leader. As for Sony Pictures Networks India, the bulk of its viewership comes from its secondary Hindi GEC Sony Sab, while Sony TV, as mentioned, does not have a big contribution to the ratings chart as its serials do not generate as much viewership as its non-fiction properties.

This is why so many channels are desperate to get out of the ratings rut before it becomes too little, too late. Sony TV has comparatively little to worry about since its ratings surge is almost annual in nature, driven by KBC and Indian Idol. But the others do not have as many established reality shows to rely on, and need to throw everything at the wall to see what sticks. Perhaps none of them is as desperate as Zee Marathi, which has embarked on a full-scale rebranding to lift its sagging fortunes, which have tumbled since it lost the lead position to Star Pravah in 2020. But the fact that they are all doing it on a single day makes it all the more interesting.

Disclaimer: Views expressed are solely the author’s own.