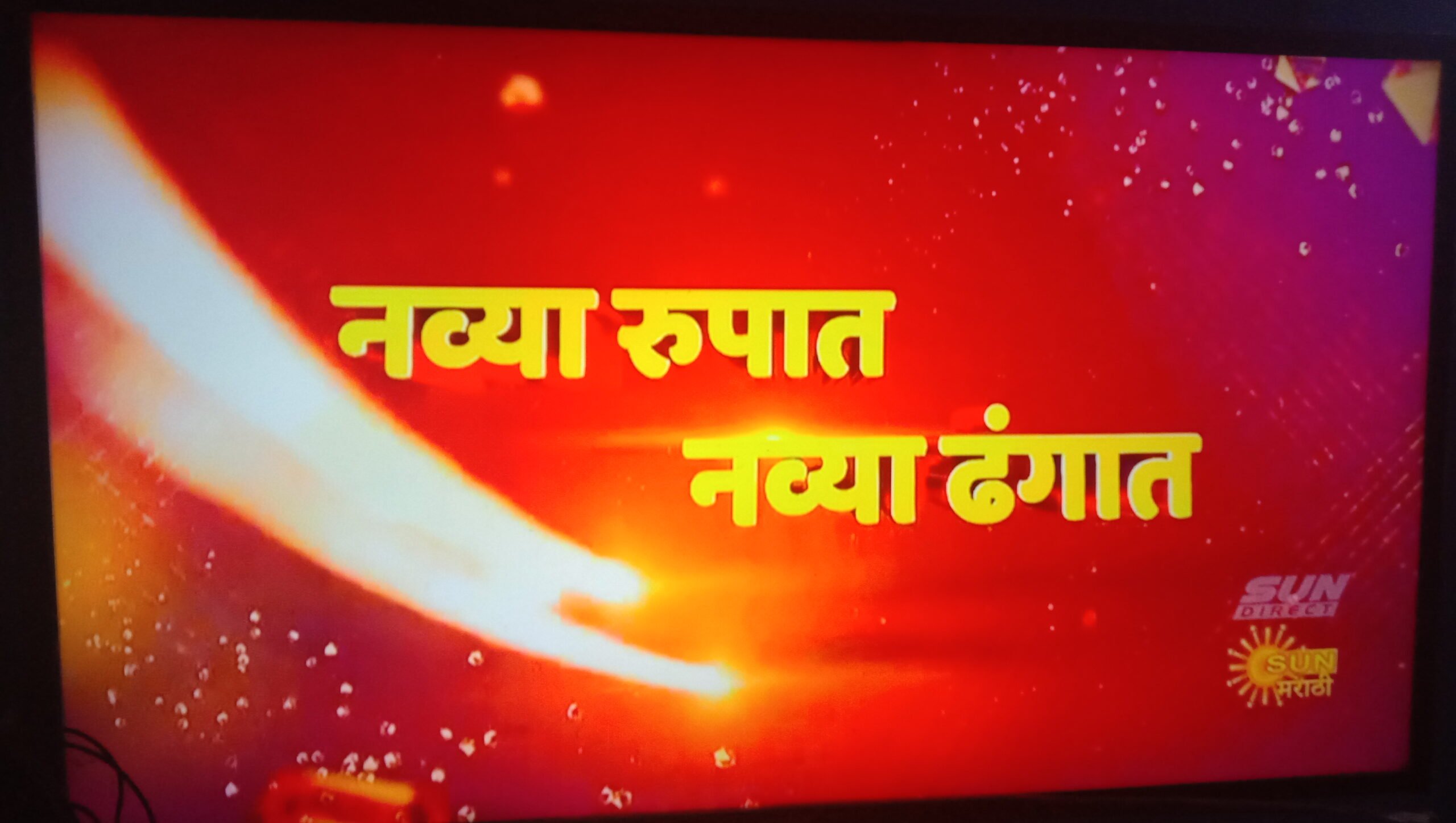 After delaying its much-anticipated launch for over two years, Sun TV Network may finally be ready to launch its free-to-air Marathi entertainment channel Sun Marathi soon. With a strong brand recognition in the four South Indian markets for over two decades, and a fast-growing presence in the Bengali market through Sun Bangla, the broadcaster is getting one step closer to making its grand entry in one of the largest regional TV markets in India.

New promos have been spotted on Sun Marathi, stating that it is coming to viewers soon using the words Navya Rupaat, Navya Dhangaat (translated from Marathi as with a new form and a new look). Combined with the fact that the channel was added by DD Free Dish earlier this week, this is an indication that the broadcaster may finally be ready to take the wraps off Sun Marathi, after being in a testing phase for nearly two years since 2019, and facing launch delays due to the COVID-19 pandemic.

Sun Marathi started its test transmission in September 2019, some months after Sun Bangla was launched in February 2019. It has hitherto been available only on Sun Direct, the Sun TV Network’s DTH platform, as a test service on channel number 686 (though it will likely shift to LCN 670, which has been reserved for it, after it launches). So far it has been airing only a Marathi dubbed version of the network’s Kannada serial Jai Hanuman, which aired on Udaya TV.

Sun Marathi will have its task cut out for it if it is to succeed. Today the Marathi TV market is ruled by Star Pravah, whose serials such as Rang Maza Vegla, Mulgi Zali Ho and Sukh Mhanje Nakki Kay Asta have put it in the driver’s seat with a huge lead over the competition. Star Pravah overtook the longtime leader Zee Marathi, which had a strong grip on the leadership spot for many years, in 2020. Other key competitors include Colors Marathi, Zee Yuva and Sony Marathi, which celebrates its third anniversary today (19 August) — as well as the free-to-air channel Fakt Marathi, owned by Enterr10 Network, which is the only Marathi entertainment channel on DD Free Dish other than Sun Marathi.

There is also a small but growing number of Marathi movie channels, namely Zee Talkies, Shemaroo MarathiBana and Zee Chitramandir, of which the last two are available on DD Free Dish (indeed, Zee Chitramandir was launched exclusively for DD Free Dish), though the Star network is rumoured to be planning for a Marathi movie channel called Pravah Picture, and has applied for its trademark registration. Zee, especially, is known for pouring in a lot of money and resources in the Marathi market, which is why it has multiple channels like Zee Marathi, Zee Yuva, Zee Talkies, Zee Chitramandir and the music channel Zee Vajwa (which was launched last year), compared to only one entertainment and movie channel each for other regional languages.

Star Pravah’s recent dominance has meant that other channels have struggled to keep up with it in the rating chart. Zee Marathi has not been able to generate enough ratings from its serials such as Aggabai Sunbai and its reality shows like Chala Hawa Yeu Dya, so it has announced a large-scale rebranding on 23 August with a new look, graphics and lineup of shows. Sister channel Zee Yuva has largely given up on the race, and mostly airs movies and repeat telecasts of serials. Colors Marathi has been struggling too, though it has been steadily been rolling out new serials at regular intervals. Relative newcomer Sony Marathi has been doing comparatively well with a diverse mix of fiction and non-fiction shows, including big-ticket reality shows like Maharashtra’s Best Dancer and Kon Honaar Crorepati. However, it has not yet eaten into the viewership of the more established players significantly. All this points to a steep uphill road ahead for Sun Marathi, and simply being able to play the DD Free Dish trump card will not be enough if its programming lineup is not strong.

Sun Bangla could lead the path for Sun Marathi

For the record, Sun Bangla has steadily been growing its viewership through both original Bengali shows and dubbed versions of its South Indian serials like Nandini. These have proved to be very popular both on the TV channel and on its YouTube channel, which boasts over 55 lakh subscribers. Until March 2021, Sun Bangla was consistently in BARC’s weekly rating list of top 5 Bengali channels, but ratings have dwindled since April and it has narrowly missed out making the top five. Nevertheless, Sun Bangla is currently the only Bengali GEC other than the big two channels (Zee Bangla and Star Jalsha, which together have a duopoly in the Bengali market) that produces original content for its channel. (However, competitor Colors Bangla, which so far has aired only dubbed serials, has announced a revamp with a new lineup of fiction and reality shows, as it bids to get back in the race.)

It remains to be seen whether the same approach of both original and dubbed content will work wonders for Sun Marathi. Given Marathi viewers’ fondness for South Indian dubbed movies on Hindi movie channels, the right programming strategy for Sun Marathi may well be reliant on a sizeable number of dubbed South Indian shows. But it is equally important to invest in original productions, as there is no more sure-fire way to obtain at least a respectable share of the viewership in such a fiercely competitive market.

Some channels bank on reality shows: Sony Marathi, in particular, has bet heavily on Kon Honaar Crorepati, much like its Hindi counterpart Sony TV, whose association with Kaun Banega Crorepati is extremely strong. However, given that the Sun network has always been best known for its megaserials — especially its flagship channel, Sun TV, one of India’s most popular TV channels — this may be a dangerous area to experiment with for a fledgling channel, since Sun Bangla does not have non-fiction shows either. Nevertheless, the broadcaster’s Telugu channel Gemini TV has been aggressively promoting the upcoming seasons of Evaru Meelo Koteeswarulu (the Telugu version of KBC) and MasterChef Telugu, so this is something that both Sun Bangla and Sun Marathi can consider in future.

After several delays, Sun TV Network has finally taken one step closer to the launch of Sun Marathi, and it has been promoting its upcoming launch after being added on DD Free Dish. While its presence on the free-to-air satellite platform is no doubt beneficial, given that most Marathi entertainment channels (except Fakt Marathi) are not available on DD Free Dish, this is only one piece of the jigsaw puzzle that the channel needs to solve. A good programming lineup consisting of both original and dubbed content, combined with aggressive social media promotions and a vibrant graphics package, are necessary ingredients in the recipe for Sun Marathi’s success.

One thing, though, that tips the odds in the newcomer’s favour is that Sun Marathi, like Sun Bangla, will be free of cost on all platforms, so that there is one channel less in subscribers’ pay-TV channel list, something that is of even more importance as the NTO 2.0 era approaches. Moreover, the Sun network has started testing HD feeds of Sun Bangla and three other channels, and an impending switch to HD may be an added benefit for Sun Bangla and — a year or two down the line, hopefully — Sun Marathi.

Disclaimer: Views expressed are solely the author’s own.

Can anybody translate it.

I think it's about launching.

So that we can change the title accordingly.