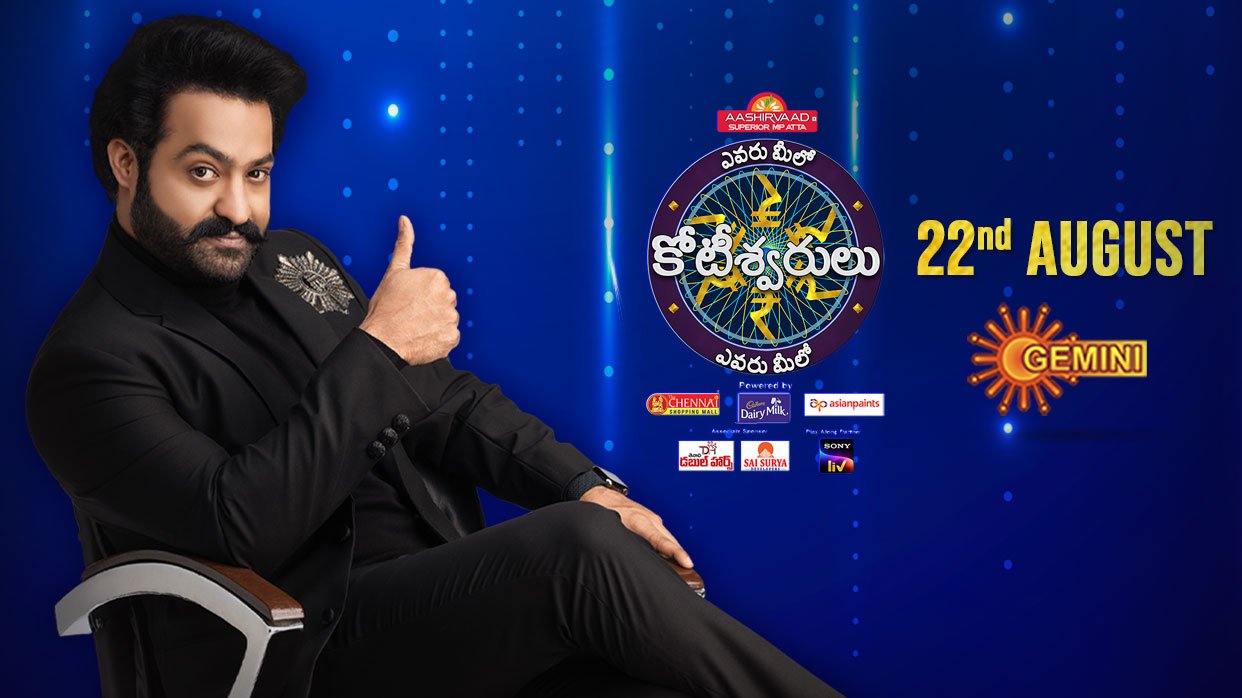 Not long ago Gemini TV, the Telugu GEC from Sun Network was one of the popular channels in Telugu speaking markets and was constantly in the race with Star Maa (then Maa TV) for the number 1 position in TRPs. Now tables are turned for the channel as they are the least-watched Telugu GEC in the Telugu speaking states according to BARC India data week after week. Even, the airings of the blockbusters Sarileru Neekevvaru and Ala Vaikunthapuramulo both of which posted the highest TRPs then hadn’t helped the channel to move into a competitive position.

To come out of the rut, Gemini TV is putting its complete faith in the tried and tested western reality formats. The first one out of the bag is Evaru Meelo Koteeswarulu, a new incarnation of one of the biggest Star Maa’s triumphs, Meelo Evaru Koteeswarudu with Jr NTR handling the hosting duties. The star is returning to the television after his big success with Star Maa’s Bigg Boss freshmen season in 2017. Joining him is Tamannah, in her first television gig is hosting MasterChef Telugu. Both the shows are scheduled at 8.30 pm with Evaru Meelo Kooteswarulu airing from Monday to Thursday and MasterChef Telugu airing on the remaining days.

Meelo Evaru Koteeswarudu on Star Maa (then Maa TV) also had bit of problematic history. While the first two seasons hosted by Akkineni Nagarjuna were a big success for the network, the third and fourth outings had seen dwindling results. Star India then had used the launch of the fourth season to rebrand the channel with the Star moniker, resulting in a change of host from Nagarjuna to Chiranjeevi. One can blame the shorter windows between the seasons for the less than expected result. Whatever the reasons are, Star Maa chose not to return with a new season of the format and had opted to introduce the Bigg Boss format into Telugu.

The success of this endeavour however isn’t sureshot for the network as the time slot already has a very strong counter programming from the competition. The eventual return of Star Maa’s Bigg Boss with the new season just around the corner isn’t doing Gemini any favours. The continued cricket broadcast from September with both IPL and ICC WT20 back to back will surely have an impact on most of the GECs performances as well. One can hope the channel finds its saving grace with one of the titles as will be great for consumers with having a great choice to watch.

That being said, unlike the rest of the competition in the Telugu space, Gemini TV is very little known for its reality offerings. The breakout reality offerings from the channel are very few like No 1 Yaari with Rana Daggubati, Memu Saitham by Manchu Lakshmi apart from some dance and singing reality shows. The competition including Zee Telugu and Star Maa on the other hand are creating hit reality offerings consistently like Sixth Sense, Dancee+, Maya Dweepam, Drama Juniors etc which had created a much necessary buzz around them. Taking another troubled network ETV as an example, non-fiction offerings like Jabardasth and Dhee had become the channel’s saviours are constantly buzzed around by its viewers.

Evaru Meelo Koteeswarulu is set to premiere on August 22 and MasterChef Telugu is premiering on August 27. Are you excited about these reality shows on Gemini TV? Let us know in the comments section below.

Dish TV announces new offers on the occasion of Onam

Wow @Saichaitanya4496 bro, this is a very detailed analysis on the history of reality shows on Gemini TV and Star Maa. This is exactly how I would have written if I had knowledge of the Telugu TV industry. You have even mentioned ETV shows like Extra Jabardasth. Only Zee Telugu is missing; otherwise this is a very comprehensive article! :clap2:

Wow @Saichaitanya4496 bro, this is a very detailed analysis on the history of reality shows on Gemini TV and Star Maa. This is exactly how I would have written if I had knowledge of the Telugu TV industry. You have even mentioned ETV shows like Extra Jabardasth. Only Zee Telugu is missing; otherwise this is a very comprehensive article! :clap2:

Thanks buddy.. I had mentioned a couple of shows from Zee Telugu as well, Maaya Dweepam and Drama Juniors are their shows only..