So lets see Sky will overtake TS or not


anantisback said:
In a ground breaking decision government of India has allowed 100 % FDI in DTH and broadcast sector
Click to expand...

Can we have the full news? Giving Information is good but posting one liners is against forum rules. you must have a valid news covering it's description and source. 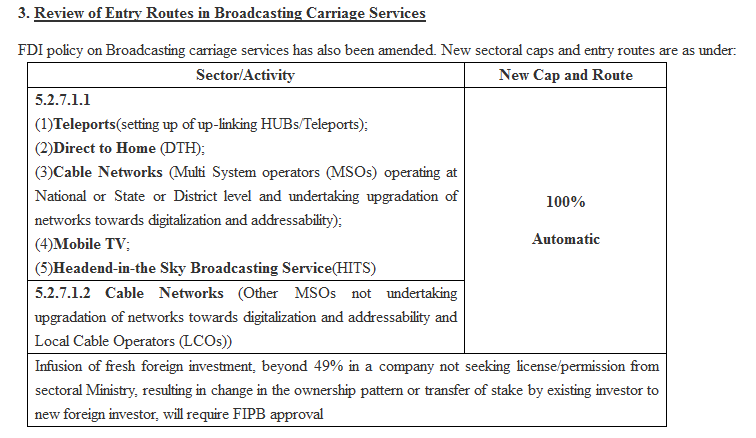 100% FDI allowed in Teleports, DTH, Cable Network. Mobile TV and HITS.
I wonder what specifically Mobile TV is and why there is no mention of DTT?

Check this out from The Times of India

RE: Check this out from The Times of India

Bro, you can add this post as a reply to your main thread itself. Anyway, we will merge it to that thread this time.

The Union Government has radically liberalized the FDI regime today, with the objective of providing major impetus to employment and job creation in India. The decision was taken at a high-level meeting chaired by Prime Minister Narendra Modi today. This is the second major reform after the last radical changes announced in November 2015. Now most of the sectors would be under automatic approval route, except a small negative list. With these changes, India is now the most open economy in the world for FDI.
In last two years, Government has brought major FDI policy reforms in a number of sectors viz. Defence, Construction Development, Insurance, Pension Sector, Broadcasting Sector, Tea, Coffee, Rubber, Cardamom, Palm Oil Tree and Olive Oil Tree Plantations, Single Brand Retail Trading, Manufacturing Sector, Limited Liability Partnerships, Civil Aviation, Credit Information Companies, Satellites- establishment/operation and Asset Reconstruction Companies. Measures undertaken by the Government have resulted in increased FDI inflows at US$ 55.46 billion in financial year 2015-16, as against US$ 36.04 billion during the financial year 2013-14. This is the highest ever FDI inflow for a particular financial year. However, it is felt that the country has potential to attract far more foreign investment which can be achieved by further liberalizing and simplifying the FDI regime. India today has been rated as Number 1 FDI Investment Destination by several International Agencies.
Accordingly the Government has decided to introduce a number of amendments in the FDI Policy. Changes introduced in the policy include increase in sectoral caps, bringing more activities under automatic route and easing of conditionalities for foreign investment. These amendments seek to further simplify the regulations governing FDI in the country and make India an attractive destination for foreign investors. Details of these changes are given in the following paragraphs:
1. Radical Changes for promoting Food Products manufactured/produced in India
It has now been decided to permit 100% FDI under government approval route for trading, including through e-commerce, in respect of food products manufactured or produced in India.
2. Foreign Investment in Defence Sector up to 100%
Present FDI regime permits 49% FDI participation in the equity of a company under automatic route. FDI above 49% is permitted through Government approval on case to case basis, wherever it is likely to result in access to modern and ‘state-of-art’ technology in the country. In this regard, the following changes have inter-alia been brought in the FDI policy on this sector:
i. Foreign investment beyond 49% has now been permitted through government approval route, in cases resulting in access to modern technology in the country or for other reasons to be recorded. The condition of access to ‘state-of-art’ technology in the country has been done away with.
ii. FDI limit for defence sector has also been made applicable to Manufacturing of Small Arms and Ammunitions covered under Arms Act 1959.
3. Review of Entry Routes in Broadcasting Carriage Services
Indian Television Dot Com | Radical changes in FDI regime; Most sectors on automatic FDI route