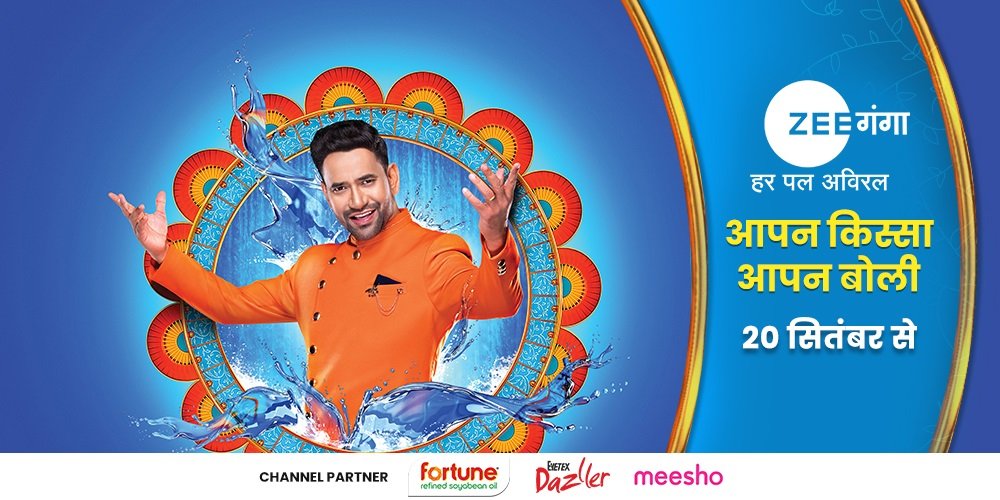 The Zee network’s Bhojpuri general entertainment channel (GEC) Big Ganga has rebranded to Zee Ganga as of Monday (20 September). It has introduced a colourful new look, a new programming lineup and a new slogan, Har Pal Aviral (Every Moment is Precious). This marks a new chapter in the journey of the largest Bhojpuri entertainment channel, which was launched in 2011 as Big Magic Bihar/Jharkhand by Reliance Broadcast Network (Reliance ADAG Group) and rebranded to Big Ganga in 2016.

With this rebrand, only Big Magic, one of Zee’s free-to-air Hindi GECs, continues to use the Big brand, which has persisted since Zee acquired it and the erstwhile Big Ganga from Reliance Broadcast Network. It can potentially also shed the Big brand in the coming months and rebrand to Zee Magic, as Zee has a stronger brand recognition, but when this will happen is anyone’s guess for now. Last year, lifestyle channel Living Foodz had also adopted the Zee brand and rebranded to Zee Zest.

The Bhojpuri market, which is concentrated in Bihar and Jharkhand, has always been distinct from the rest of the country since the viewer base is almost entirely rural and is heavily reliant on DD Free Dish. All Bhojpuri channels, therefore, must be present on DD Free Dish or risk losing viewership. This is not the case for most other regional markets, where pay-TV channels account for most viewership. Not to mention that Goldmines Telefilms’ Bhojpuri dubbed movie channel Dhinchaak, which is among the top 10 TV channels in India by viewership, gained popularity primarily because of the state-owned DTH platform.

That said, the majority of Bhojpuri channels today are movie channels, such as Bhojpuri Cinema (from Enterr10 Network), Dabangg (from Sri Adhikari Brothers/SAB Group), Filamchi Bhojpuri (from IN10 Media), B4U Bhojpuri and Zee’s own Zee Biskope. They account for most of the viewership from this market. There are only a handful of Bhojpuri GECs, namely Zee Ganga, Dishum, Mahua Plus and Enterr10 Rangeela, of which Zee Ganga is the most popular by far. Moreover, Viacom18 has been planning the launch of Rishtey Bhojpuri for quite some time, though it has not yet gone forth with it.

To increase its viewership and reach, Zee Ganga is launching a slate of new shows. These include serials such as Mitwa, Shyam Tulsi, Bandhan Toote Na and Kaniya Pradhan and a new reality show, Memsahab No. 1. The channel has been promoting the rebrand and new shows on its social media handles to attract viewers, as it bids to increase its market share and enhance its brand recognition by now explicitly including Zee, one of India’s strongest brands, in its name.

Planned rebrand in 2017 was shelved, but gained momentum recently

Interestingly, Zee had planned to rebrand Big Ganga to Zee Ganga back in 2017, as well as rebranding Big Magic to Zee Magic. Logos were even leaked that used the then-new circle logo of the Zee network. The rebrands had been rumoured for months. However, those plans were shelved in October 2019 as Zee decided to continue with the Big brands for the time being. Nevertheless, Zee’s Bhojpuri movie channel, initially supposed to be called Ganga Biskope, launched as Zee Biskope in December of that year.

Of late, however, it became increasingly clear that Zee wanted to rebrand Big Ganga to Zee Ganga, and it had been rumoured since at least July 2021. This was confirmed in August as Zee received MIB approval to get its licence for Big Ganga renamed to Zee Ganga. It was only a matter of time before the rebrand took place. Originally scheduled for the 6th of September, it was slightly delayed but has finally taken effect today. As a consequence, the on-screen channel logo has been shifted to the top left corner, in line with the great majority of the Zee network’s non-news channels.

This rebrand is essential for the Zee network as it has been struggling in recent months, both at the corporate level and concerning the falling ratings of many of its TV channels. Bihar and Jharkhand is traditionally a market where Zee has excelled, both through its Bhojpuri channels (Zee Ganga and Zee Biskope) and its Hindi free-to-air channels Zee Anmol, Big Magic and Zee Anmol Cinema. This is a further step in that direction as the broadcaster aims to expand its penetration in this rapidly growing market and potentially rebrand Big Magic to Zee Magic at some point in the future.