As you all know, I have been trying to swap my cardless box with an older HD box model due to the lag I felt in the yellow UI. After struggling almost for a month, the replacement was done today. Series of events unfolded in last 20 odd days follows, it's quite a story actually.

I raised a request on 17th November and got a call on same day from the field team. The guy said, they don't have stock of old boxes and he needs 10 days time. As he can't keep the complaint open for 10 days, he personally requested me to share the closing code that comes on the TV screen so that he can close the complaint but promised me to replace the box after 10 days. I believed him and this is where things went haywire (May be for good reasons, later on this part).

I waited 10 days and gave him a call and he said old HD boxes stock arrived. He even sent a pic of Huawei HD box (I shared it in the GD thread to confirm if it's Huawei if you guys remember). But he said since I'm using a cardless box, he needs to get a View Card as well which they didn't have at that time. Then I had to call him on a daily basis and he kept saying they will get the VC tomorrow, day after, he is on leave that day etc,. etc,. After trying numerous times, I asked him if I need to raise it to Airtel, and he said, "No need sir, the complaint will come to us only anyway" This is where I got frustrated and sent a message via DM to Airtel on Twitter on 4th December. Within an hour, they registered a complaint and it got assigned to the same guy (As he said). Then again, nothing was happening and that guy was saying the same thing that they don't have VCs to swap. I kept following up with Airtel on Twitter via DM, although they respond promptly and were saying they were on it and will update me, nothing was happening.

Then I have tweeted Airtel on 8th December as DM wasn't working. This is when things started moving at a rapid pace. I received a call immediately from the Airtel team and a rep was assigned specifically to my issue. She called me around 5 PM and said she has been assigned to this issue and she will work with me till the closure. Rightly so, at around 8 PM, I got a call from local Airtel distribution head and he listened to my problem carefully and understood what I need. I told him, I need the HEVC HD box with old red UI, I took a chance here, as it went this far may be I can get the Flextronics box. Then he said he will get back to me and he called me again within 15 minutes and said they have the normal HD boxes and not the Flextronics box and asked me if I specifically need the Flextronics only. I said, I need the HEVC HD box only as it will be future proof. He said, we can get it this time, as those boxes are still available but what if they are not available in future. I said, that's fine we will see what happens in future later, get me this box for now. He said Ok.

Then the Airtel rep called me on 9th asked me if it was resolved. I told her about the call I received and said it's still open. She said she is continuously following up and assured me it will be resolved. She called again yesterday and updated me they were facing an error while mapping the new VC with the STB and it will be resolved soon. Later in the evening yesterday, I lost channels on the current box indicating the new box must have been activated. She called again and asked if anyone came to swap the box and I said no, but I lost the channels and they may come soon. She said she will follow-up again and today morning I called the Distributor head and asked him the status. He said the swap is done, they are testing the STB from their end and they will come and swap it in an hour. FINALLY, they came around 4 PM today and swapped it. I called the guy and thanked him for his help!!

BTW, it was a free swap and there were no charges. Though it took long time, I'm absolutely happy to see the good old red UI again which is super fast!! PQ is anyway awesome on this box. I wouldn't have got this box if the 1st guy was able to resolve the issue, I would have got a refurbished box. So everything happens for a reason, long waits aren't always bad after all

Just posting the STB pic for confirmation below. 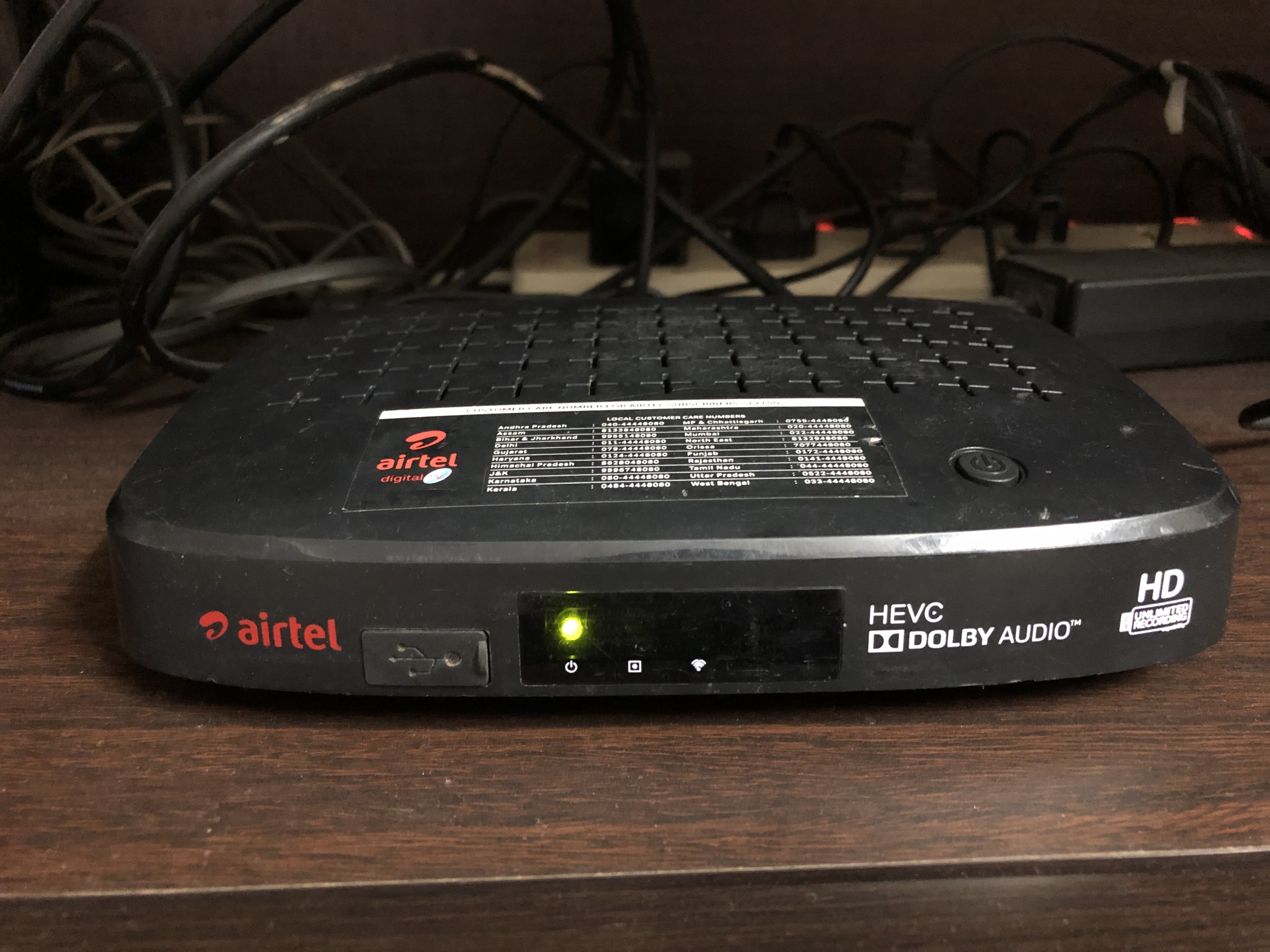 PS: You might be thinking why I keep changing things around, I'm sorry but I can't help it, I can't accept things I regularly use, even if there is a minute issue with them.

Thanks for sharing bro. This will be really helpful for people to escalate when issues arise.

I have used Huawei box with old UI extensively at friend's home and I myself have Technicolor HEVC box with yellow UI. There are minor bugs in new UI but I do not find it any slower than Huawei box. Maybe Flextronix is better but Technicolor is at par with Huawei in terms of speed and responsiveness.

anuj_t said:
I have used Huawei box with old UI extensively at friend's home and I myself have Technicolor HEVC box with yellow UI. There are minor bugs in new UI but I do not find it any slower than Huawei box. Maybe Flextronix is better but Technicolor is at par with Huawei in terms of speed and responsiveness.
Click to expand...

There's a simple way to test this. On your technicolor box, click up arrow to open the epg for current channel. Then start a timer and keep clicking right arrow till you go to the last program available on epg for that channel. Note the time it takes. Then go to your friend's home and check this on Huawei box. You need to click right arrow first on Huawei and then keep clicking down arrow.

Congrats @Siva bro.
But how did you got new STB & that too for free?

I think they have considered my previous swap as HD upgrade bro. So, STB is technically in warranty.

Siva said:
I think they have considered my previous swap as HD upgrade bro. So, STB is technically in warranty.
Click to expand...

I am also thinking to swap my Technicolor stb as it's UI is lagging too much + remote is not working properly & already purchased 2 remotes in last 9 months + there's a issue in recorder, whenever I record anything next time when I switch on STB it asks me to format + sometimes it says "Error! Sorry could not load recorder" for few days.
Which STB is having better HD PQ & AQ among Technicolor & Flextronics?
Or should I wait for few months if any new STB is going to launch?

Do you have a picture of your old box?
3 More Posts...