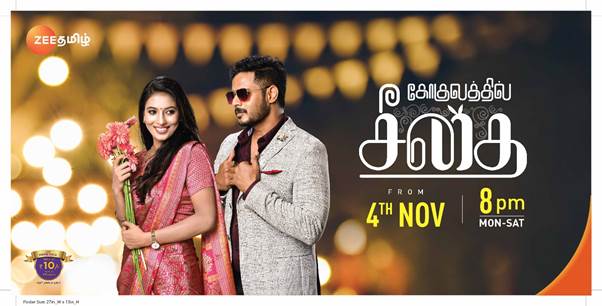 Dominant Tamil GECs Sun, Zee Tamil, and Star Vijay are looking to gain the lost momentum after going down in ratings due to the new TRAI rules. After launching Bigg Boss Season 3 last week, Star Vijay today announced the launch of their new serial titled “Sundari Neeyum Sundaran Naanum.” Star Vijay had earlier announced another new serial titled “Aayudha Ezhuthu” last week. Star Vijay aired 1 Minute promos to announce their new serials. The slot timings and other details of these two new serials will be announced soon. Sundari Neeyum Sundaran Naanum is touted to be a political comedy serial while Aayudha Ezhuthu seems to be a socio-thriller.

After beating Star Vijay in the recent weeks, Zee Tamil looks to strengthen their weekday primetime slots further. A new serial titled “Nachiyaarpuram” will premiere at 8 pm from July 8 on weekdays. The serial will have real-life couples Dinesh Gopalsamy and Rachitha Dinesh Mahalakshmi paired against each other in the lead roles. Rachitha gained popularity through the hit serial Saravanan Meenatchi in Star Vijay while Dinesh enjoyed his success through Poove Poochudava in Zee Tamil. With the success of Yaaradi Nee Mohini at 8.30 pm and Sembaruthi at 09.00 pm, Zee Tamil looks to grab the 08.00 pm slot from Sun TV beating Naayagi. It must also be noted that Naayagi is the most-watched Tamil soap opera currently.

After launching a couple of serials last month, Sun TV also looks to premiere a new serial next month. The highly expected series featuring Krishna of Deivamagal And Sharanya Turadi of Nenjam Marappathillai fame is aiming for July launch, and the serial is tentatively titled as “Run”. The announcement of Raadhika Sarathkumar’s comeback serial is also expected soon. As the GECs fight it out for the top position, Tamil viewers are in for a great feast.