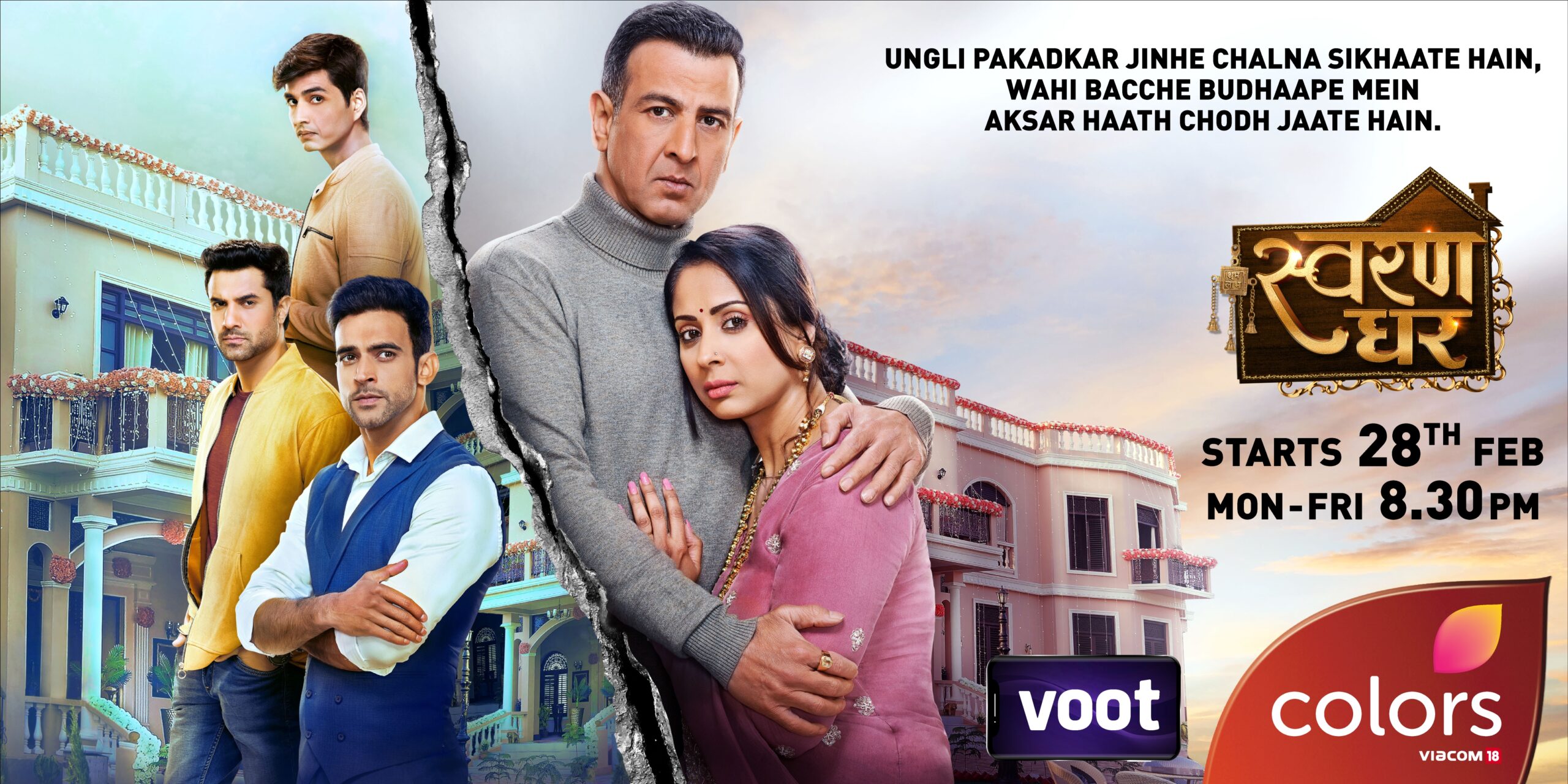 Hindi General Entertainment Channel (GEC) Colors has announced the launch of a new show ‘Swaran Ghar’.  This is a family drama serial produced by Sargun Mehta and Ravi Dubey. ‘Swaran Ghar’ is starting on 28th February 2022 at 8:30 pm and will air every Monday to Friday (weekdays) on Colors.

The show is set in Chandigarh and chronicles the life of a middle-aged woman Swaran (played by Sangita Ghosh) and her husband Kanwaljeet (played by Ronit Bose Roy) whose lives are shattered as they get unceremoniously abandoned by their children. ‘Swaran Ghar’ is about how Swaran alone gathers the strength to lead a fulfilling life.

“We are pleased to launch a new heart-warming family drama ‘Swaran Ghar’. This show will present the various nuances of parenthood backed by a splendid storyline and an endearing cast,” said Nina Elavia Jaipuria, Head, Hindi Mass Entertainment and Kids TV Network, Viacom18 announcing the show.

Swaran is a devoted mother who dutifully takes care of her family while her husband Kanwaljeet has relentlessly served his family all his life, taking care of all their needs. Their lives take a dark turn when Kanwaljeet falls seriously ill and becomes heavily dependent on Swaran. Burdened with pain and responsibilities, Swaran turns to her children for support in these critical times. However, her children disregard her plea for help and cater only for their own selfish needs leaving Swaran and Kanwaljeet in the lurch.

Manisha Sharma, Chief Content Officer, Hindi Mass Entertainment, Viacom18 adds, “Our new show ‘Swaran Ghar’ represents one such story of Swaran who is abandoned by her children in the most trying times and how she comes stronger out of it. After the immense success of Udaariyaan, we are once again delighted to join forces with Sargun Mehta and Ravi Dubey. With a robust lineup of cast including Ronit Bose Roy, Sangita Ghosh and Ajay Singh Chaudhary, we hope to create magic with the new venture.”

Producer, Sargun Mehta said, “Swaran Ghar stems from the various real-life stories and experiences we see around us.  We are delighted to present a show that will give a new perspective on parenthood and shed light on the innumerable struggles they go through.”

The channel has planned an extensive 360-degree marketing and digital campaign for the launch of the show. To seek blessings for the show, Ronit Bose Roy and Sangita Ghosh visited an old age home in Delhi to bring smiles to the faces of the elderly. The channel has prepared 7500+ promos which will be aired across the network and non-network channels in Hindi Movies, Hindi News, Kids, Music, and Regionals genre.

D2H ropes in cricketer Rishabh Pant as its brand ambassador

Swaran Ghar will replace Molkki and take the slot of 10 pm. The show is on the lines of Baghban with the similar vibe of three sons, but none of them was keen on taking up their parent's responsibility, while the parents are now firm on their decision to divorce such children and live peacefully without them.

It also brings a hint of Anupamaa, with the headstrong attitude of Swaran. The concept is quite fresh on Television, it has already intrigued the viewers with its first promo. We can't wait to see what the show has to offer.

Ravi Dubey and Sargun Mehta who turned producers with Colors’ show Udaariyaan which has become quite popular among the masses and is the no one show on the channel are working on another show under their banner Dreamiyata.

Promos are always good. But I want a small run show on TV on these topics.