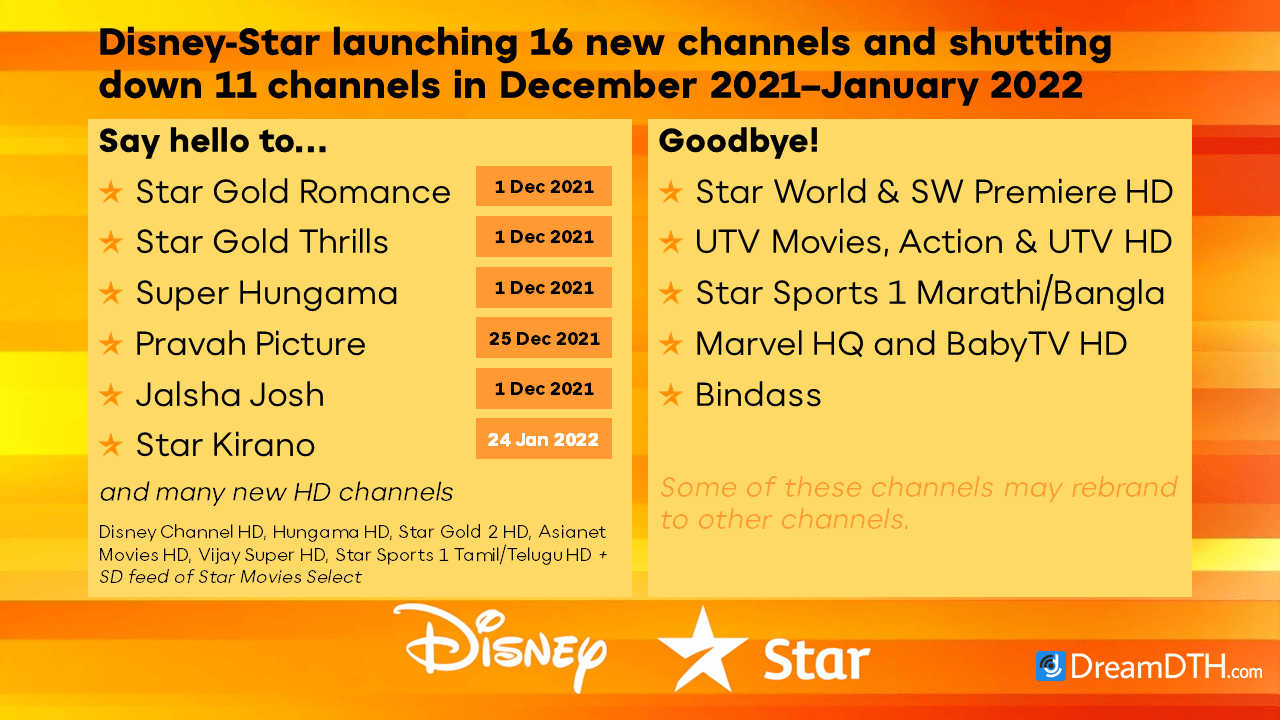 The TRAI order to broadcasters to comply with the NTO 2.0 rules has sent broadcasters in a hurry to publish their new RIO lists. Sony Pictures Networks (SPN), the first Indian network to publish its new list of prices, was heavily criticised by many for its exorbitantly high channel prices. Shortly thereafter, the country’s largest broadcaster, The Walt Disney Company India, via its subsidiary Star TV Network, has released a new RIO list complying with the NTO 2.0 regulations. Both broadcasters have faced flak from many viewers for pulling out many of their most popular channels from channel packs, and offering them only on an à-la-carte basis and at much higher prices than before.

However, along with new channel prices, the release of RIO lists is also an opportunity for broadcasters to announce the launch of new channels or discontinue existing ones. Disney-Star has seized the opportunity to launch a long list of new channels and shut down or rebrand many underperforming channels. Several new channels have been rumoured to be launched for a long time by Disney-Star, as it has procured a number of new licences from the Ministry of Information and Broadcasting recently, and even before then, several new trademarks were filed with the Government of India’s Intellectual Property Office many months before the news of their licences became public. Television enthusiasts in India have therefore known of these new launches and rumoured shutdowns for months.

Indeed, some of them have been rumoured for a long time before the COVID-19 pandemic struck, but Disney-Star has repeatedly delayed their launch for nearly two years, waiting for the NTO 2.0 directive from TRAI before releasing its list of new channel prices. At the same time, some underperforming channels have been in a coma for a long time, and Disney-Star has somehow kept them alive but only in name, as they wait on death row to have their life support cut off. The most well-known examples of channels waiting to be shut down are the English GECs (GEC = general entertainment channel) Star World and Star World Premiere HD, but Disney-Star has so far refused to pull the plug on them, despite no longer airing new shows or keeping their social media handles active. The only channel it launched from the list of rumoured launches was the Tamil channel Vijay Music in October 2020. A year later, we now have more concrete plans for the channels that will finally get the green signal to launch or shut down in a few months’ time.

In all, Disney-Star is set to launch 16 new channels and shut down 11, with the majority of the changes taking place on 1 December, while several regional movie channels will be launched on Christmas Day (25 December), and the Odia GEC Star Kirano will be launched on 24 January 2022. However, not all the shutdowns necessarily mean that the channel will disappear from the airwaves altogether, as some existing channels will rebrand with new names, particularly those using the UTV brand as Disney-Star has decided to discontinue that brand in favour of the much more well-entrenched Star brand. Some of these are in-place rebrands, such as when Movies OK rebranded to Star Gold 2 in February 2020. However, others are de-facto replacements, such as when Channel V was replaced by Star Sports 3 in September 2018, but this was not considered to be a rebrand per se, as the channels were of completely different genres.

Here is a list of all the channels from Disney-Star that are launching or shutting down in December 2021 and January 2022.

Note that the genre of the new Bengali channel Jalsha Josh is as yet unknown: the RIO document released by Disney-Star mentions that it will be a movie channel, but the channel’s trademark filed with the Intellectual Property Office contains a football in the logo, hinting that it could be a sports channel, especially since it is replacing Star Sports 1 Bangla. In any case, it could be a combination of the two genres, since Jalsha Movies has showed football events on several occasions due to the sport’s high popularity in West Bengal.

Note: These replacements are only a speculative list and do not necessarily represent the exact same channel licences as seen in the MIB’s list of permitted TV channels. Therefore, for instance, Star World’s licence has been replaced by that of Star Sports 1 Tamil HD, but the latter can hardly be considered as a replacement for the former.

How the new channels fit into Disney-Star’s existing portfolio

After all these launches, Disney-Star’s overall TV portfolio in India will look like this:

With a whopping 78 TV channels across a number of genres and languages, Disney-Star consolidates its position as India’s largest TV broadcaster, even though the proposed merger between Zee and Sony, should it take place, may overtake it. Nevertheless, it remains a juggernaut in the Indian and global TV broadcast sector, and, along with Disney+ Hotstar, it is one of Disney’s most important assets globally.

UPDATE (29 Nov. 2021): Due to the delay in the implementation of NTO 2.0, which has been pushed to April 2022, Star India has deferred the launches and shutdowns in this article indefinitely until further notice. The original article in its entirety is above.

It has SD & HD channels

It has SD & HD channels