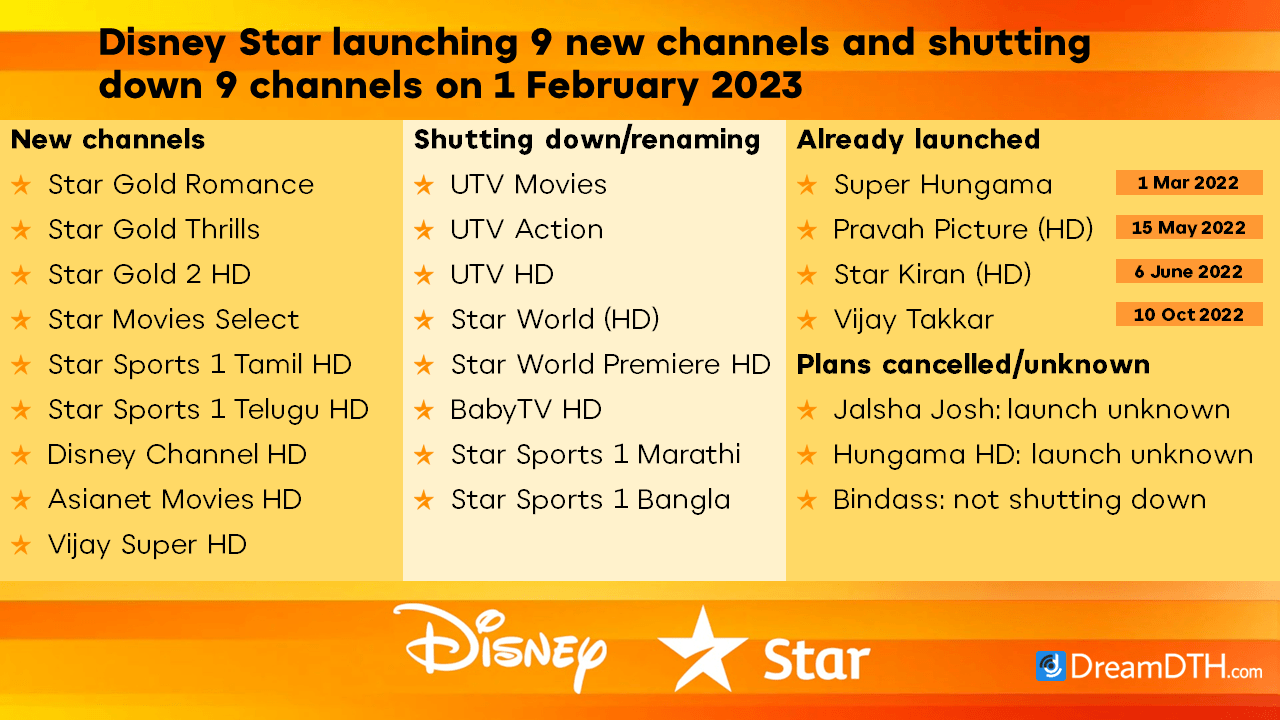 The announcement of the much-delayed revised version of the New Tariff Order for channel packaging and pricing, popularly known as NTO 2.0, by the Telecom Regulatory Authority of India (TRAI) on 22 November has left broadcasters scrambling to publish their updated rate cards with new channel prices, bouquets and rate details.

By 16 December (Friday), almost all broadcasters had published their new Reference Interconnect Offers (RIOs) — which will come into effect of 1 February 2023 — except a couple of big names, most notably Disney Star, which have done so in the ensuing days.

This is a momentous occasion in the history of the Indian TV industry, not only because of the overall rise in channel pricing — a headache for consumers as much as it is a relief for broadcasters, after years of wrangling in court — but also because it finally gives the green signal for several launches and shutdowns from Disney Star to proceed, which have been frozen for well over a year due to the impasse over NTO 2.0.

The country’s largest broadcaster has been planning to launch several new channels and shut down existing ones since October 2021, as DreamDTH had reported at the time, with dedicated articles on regional channels, English GECs, English and Hindi movie channels and kids’ channels, and how the changes would reshape the industry.

However, because of the delay in introduction of the new NTO 2.0 tariff rules, Star decided to indefinitely postpone these launches and shutdowns at the last moment, which meant that there would not be a single new launch or rebrand before 2021 ended.

Nevertheless, it was kind enough to at least allow some launches and rebrands to proceed in 2022: the renaming of Marvel HQ to Super Hungama in March; the launch of the Marathi movie channel Pravah Picture in May and the Odia entertainment channel Star Kiran in June; the rebrand of the secondary Hindi channel Star Bharat in July; and two Tamil rebrands in October — the renaming of Vijay Music to Vijay Takkar and a graphics update for Star Vijay, five years after its big rebrand in June 2017.

Now, early on 20 December (Tuesday), the network finally uploaded its much-awaited RIO on its website which also states the upcoming launches and shutdowns of its channels. Of the 16 new channels originally announced in 2021, five launches — Pravah Picture SD/HD, Star Kiran SD/HD and Super Hungama — have already taken place.

Several underperforming channels will also be shut down on 1 February 2023, or, in some cases, will rebrand to the new channels above. These are Star World SD/HD and Star World Premiere HD (English GEC), which have been on life support for years, awaiting shutdown; UTV Movies (Hindi movies); UTV Action and UTV HD (Hollywood movies dubbed in Hindi); BabyTV HD (kids’); and Star Sports 1 Bangla and Star Sports 1 Marathi, two struggling sports channels, of which the latter was never distributed on TV platforms and is only viewable by employees of Disney Star.

Of these, BabyTV HD is not an Indian channel — it is broadcasted from Europe by Fox Networks Group, part of The Walt Disney Company — and will remain available in several countries after its withdrawal from India, as was the case with BabyTV SD, Nat Geo Music SD/HD and Nat Geo People SD/HD in June 2019.

As for Jalsha Josh (Bengali movies/sports) and Hungama HD (kids’), two other channels that had been planned in 2021, the status of their launch is unknown — possibly either cancelled or postponed — and there has been no official confirmation from the broadcaster. The Hindi music (formerly youth) channel Bindass has also been spared from shutdown, unlike the three Star World-branded channels, which will finally get the axe at long last, after existing in limbo for several years of hesitation and postponement.

Content hide
1. Comparison of planned vs. actual launches and shutdowns
2. How Disney Star’s portfolio will look like

Comparison of planned vs. actual launches and shutdowns

These, then, are the channels that were originally announced in 2021: nine channels (3 SD, 6 HD) will be launched on 1 February 2023; five (3 SD, 2 HD) have already been launched in 2022; and the statuses of the remaining two (Jalsha Josh and Hungama HD) are unknown. In addition, the launch of Vijay Takkar, replacing Vijay Music — which had not been announced in 2021 — has also been mentioned.

Similarly, these are the channels that were scheduled to shut down in December 2021, and all of these shutdowns will finally be allowed to take place on 1 February 2023, with the exception of Bindass, which will continue unaffected. Note that Marvel HQ was replaced by Super Hungama in March 2022. Also, Vijay Music was replaced by Vijay Takkar, as mentioned above.

Note, however, that some of these shutdowns are actually more of a rebrand, as the outgoing channels will have like-for-like replacements. This is particularly the case with the Hindi movie channels that use the UTV brand: UTV Movies, UTV Action and UTV HD will be replaced, respectively, by Star Gold Romance, Star Gold Thrills and Star Gold 2 HD.

This would also have been the case for Star Sports 1 Bangla, were it to be replaced by Jalsha Josh, but the plans for that channel are not known at this stage. In fact, it may well be the case that Jalsha Josh never launches at all — much like the now-cancelled Star Sports 1 Malayalam and Gujarati and Star Sports 3 HD — leaving Bengali (along with Marathi) viewers without a dedicated sports channel.

However, Star Sports 3 does have a Bengali audio feed along with Malayalam, though sadly plans to launch its HD version have been cancelled, in favour of launching HD feeds of Star Sports 1 Tamil and Telugu, which serve much larger regional markets that are important enough to warrant an HD feed.

Another important point to note is that the new NTO 2.0 regulations will finally allow for improved distribution of the two HD channels from Disney Star that were launched in 2022: Pravah Picture HD is available only on Sun Direct among DTH operators, as well as some cable platforms in Maharashtra, but Star Kiran HD does not even have that much coverage, for not a single television platform in the country carries the channel.

However, with the two new HD channels being included in broadcaster bouquets, TV platforms (including major DTH operators like Tata Play, Airtel Digital TV and Dish TV/d2h) ought to add them for the benefit for their viewers. Especially for Odia TV channels, Tarang TV, the leading Odia entertainment channel, is gearing up to distribute its HD version (so far only available on Ortel Digital, its sister company) across TV platforms. It and Star Kiran HD — which has the honour of being the first-ever Odia HD channel but has so far not been seen by anyone — will play a major role in finally bringing Odia on par with major regional languages in terms of HD channels after lagging for a long time.

After all these launches and shutdowns, Disney Star’s overall range of linear TV channels in India will look like this:

This cements Disney Star’s position as India’s largest broadcaster, and one of the largest and most recognisable companies in the country. With a whopping 77 TV channels, it remains a bellwether and juggernaut in the Indian and global TV broadcast sector, and, along with Disney+ Hotstar, it is one of Disney’s most important assets globally.

However, it will face stiff competition from the combined entity resulting from Zee and Sony’s merger, which, when it takes place in 2023, will be the most serious challenger to its unconquered dominance across both linear TV and OTT platforms.

On the next page, we re-examine how the upcoming launches and shutdowns from Disney Star will reshape the Indian TV industry, in light of the new developments over the past few months (such as Vijay Takkar) that make it different from the analysis we had done in late 2021.

What about "Star Gold Family" ??? Have they cancelled it ???