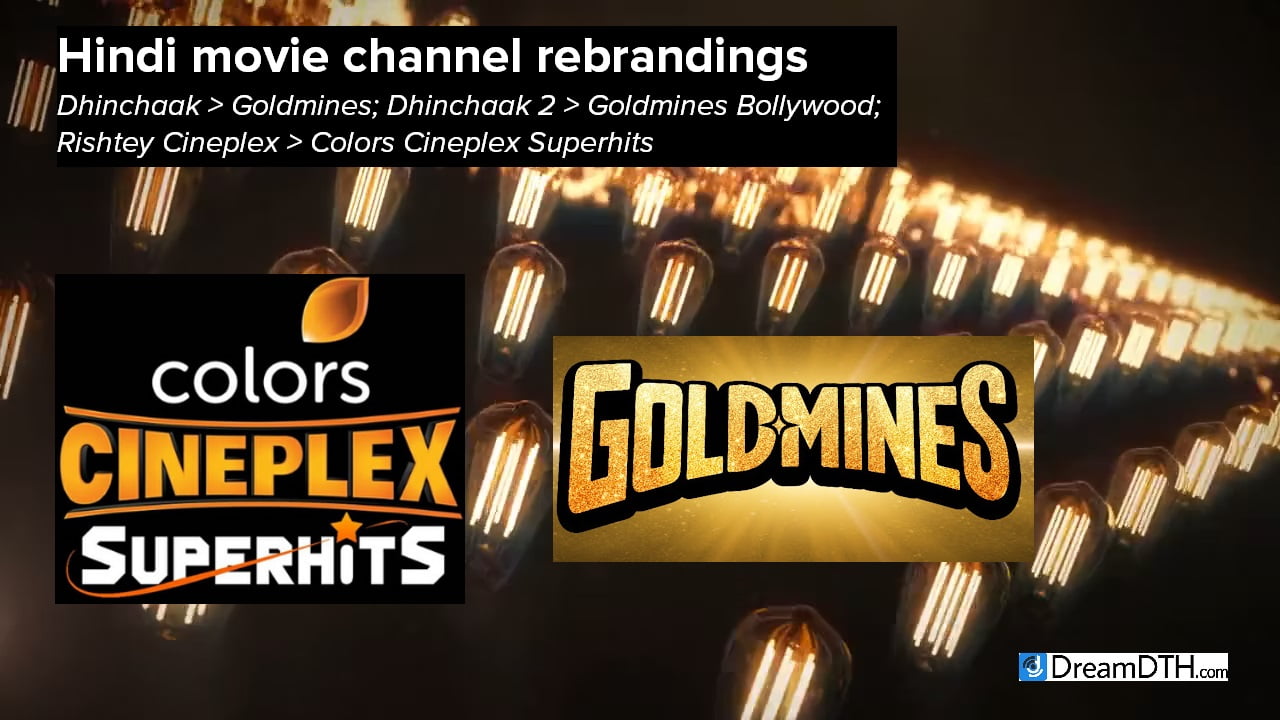 No fewer than three Hindi movie channels from two broadcasters are rebranding on Friday (1 April 2022), all of which benefit from the largest segment of rural and semi-urban TV viewers in the Hindi heartland, particularly because of DD Free Dish. As announced previously, Reliance Industries-owned Viacom18 is rebranding its rural-focused Hindi movie channel Rishtey Cineplex to Colors Cineplex Superhits, as it expands beyond its focus of South Indian dubbed movies to cater to a broader mix of both South Indian and Bollywood movies, similar to Hindi movie channels like &pictures from Zee and Star Gold 2 from Disney-Star. This comes exactly a year after Colors Cineplex Bollywood, the broadcaster’s offering dedicated to both popular and lesser-known Hindi films from all eras, was launched on 1 April 2021.

At the same time, film distribution and production company Goldmines Telefilms — riding on the massive success of its South Indian dubbed films, particularly the recent premiere of Pushpa: The Rise — is rebranding its Hindi movie channels Dhinchaak and Dhinchaak 2 to Goldmines and Goldmines Bollywood, respectively. This comes as Dhinchaak has firmly held on to its reputation as one of India’s top 10 most popular channels in the BARC ratings chart, with its phenomenal success being thanks to dubbed South Indian movies that the company has recently acquired from other Hindi movie broadcasters. Goldmines Telefilms has taken this opportunity to not only retire the Dhinchaak brand in favour of the parent Goldmines brand, but also to launch more new channels such as Goldmines Bhojpuri simultaneously, as it seeks to reaffirm its status as Bharat Ka Sabse Bada Cinema Ghar (India’s biggest multiplex).

As a result, when Dhinchaak got the satellite rights of South Indian (especially Telugu) dubbed movies that previously fetched extremely high ratings on Sony Max, it came as a body blow to the channel, especially since it was also losing a large number of Hindi movies to other broadcasters. We have explained how, following their mega-merger, the duo of Sony Pictures Networks India and Zee Entertainment Enterprises can regain their position as the king of the Hindi movie genre from Star Gold and other Hindi movie channels from Disney-Star. The key emphasis was on devoting as much airtime as possible to their combined vast Hindi movie library, instead of focusing disproportionally on South Indian movies.

However, the fact remains that South Indian dubbed movies account for the great majority of the viewership of Hindi movie channels, thanks to the Hindi-speaking masses in rural and semi-urban areas that largely use DD Free Dish, and it is too lucrative a segment to ignore for broadcasters. Big pay-TV broadcasters have dedicated channels on DD Free Dish such as Star Utsav Movies, Zee Anmol Cinema, Sony Wah and the erstwhile Rishtey Cineplex for this reason. Such channels have been a big source of viewership for these broadcasters, until the arrival of Dhinchaak disrupted the situation.

Goldmines Telefilms has cashed in on the trend with outstanding success with Dhinchaak, as well as its sibling Dhinchaak 2, which predominantly airs classic Hindi movies from the twentieth century. For many months now, Dhinchaak has held strongly to its position in BARC’s list of top 10 most popular Indian TV channels, largely due to its massive viewership on DD Free Dish. Much of this viewership comes from the premieres of several South Indian dubbed movies, such as Ala Vaikunthapurramuloo, one of the most popular recent Telugu movies, which has been a true ‘gold mine’ for Dhinchaak.

The turning point has been the record-breaking success of the Allu Arjun-starrer Pushpa: The Rise, which shattered numerous records at the box office and permanently established the Tollywood star’s appeal in Hindi-speaking markets, which were already exposed to South action heroes on Hindi movie channels. Dhinchaak aired the world television premiere of the film on 20 March and enjoyed a thunderous reception on TV among both urban and rural audiences, beating out other premieres like the action thriller Sooryavanshi on Zee Cinema and the sports biopic 83 on Star Gold. It shows how much even urban audiences are willing to see the film on a channel that, far from being available in HD, airs in inferior SD quality and uses the outdated 4:3 aspect ratio. (However, of course, the film is available to stream on Amazon Prime Video in full HD quality, and lakhs of viewers across the country have no doubt taken advantage of that.)

It is at this juncture that Goldmines Telefilms has — somewhat surprisingly — chosen to scrap the Dhinchaak brand, just as it was starting to get even more nationwide recognition, and introduce the parent Goldmines name across not only its TV channels but also all its YouTube channels and other properties. In addition to rebranding Dhinchaak and Dhinchaak 2 as Goldmines and Goldmines Bollywood, respectively, it also has several new channels in the pipeline such as Goldmines Hindi (not the same as Goldmines Bollywood) and Goldmines Bhojpuri. Going forward, the company seeks to build on the brand recognition of Goldmines, and continue to be a major force in the Indian TV landscape in the face of major events such as the Sony-Zee merger and renewed competition from Viacom18, as discussed below.

Single Colors Cineplex brand a good move, but distribution must be improved

The massive surge of Goldmines and Dhinchaak has been a major headache for traditional Indian broadcasters, and one of these is Viacom18, which has thus far maintained four Hindi movie channels: the flagship Colors Cineplex with a blend of Hindi and South dubbed movies; its HD counterpart Colors Cineplex HD, which has recently started to show far more Hindi movies than South ones; the pure-Bollywood-dedicated Colors Cineplex Bollywood channel; and the rural-focused Rishtey Cineplex — of which the latter two are available on DD Free Dish.

Now the broadcaster has decided to streamline its Hindi movie channels under the main Colors Cineplex brand, and so it has rebranded Rishtey Cineplex to Colors Cineplex Superhits with the aim of showing more popular blockbusters from both Bollywood and South Indian cinema — such as the Malayalam superhero film Minnal Murali, which premiered on Netflix on Christmas 2021 and received global acclaim. Its slogan is Superrr hai!, which is similar to the Hit hai! slogan that is used by Colors Cineplex Bollywood since its launch exactly a year ago. This is a wise decision as the channel now shows a stronger affiliation with the master Colors brand, and its new content strategy better equips it to compete more effectively with Goldmines, Star Utsav Movies, Sony Wah, etc.

The Rishtey name will henceforth be used only by the broadcaster’s rerun Hindi entertainment channel Colors Rishtey, which — along with competitors Star Utsav, Zee Anmol and Sony Pal — will no longer be available on DD Free Dish after failing to secure coveted slots in the recent e-auction. The corresponding Hindi movie channels, however, are unaffected and continue to be available on the government-owned free-of-cost satellite TV platform.

However, Viacom18 has several distribution issues that need to be resolved with many of its channels. For starters, neither Colors Cineplex Bollywood nor the newly-rebranded Colors Cineplex Superhits is available on Tata Play (formerly Tata Sky), the largest pay satellite TV platform in India. They are available only on Airtel Digital TV, Dish TV and DD Free Dish, which means that subscribers of Tata Play, d2h and Sun Direct are missing out on these channels. Besides, Viacom18 has other channels that have similar distribution issues, for example its three HD music channels: MTV HD (exclusive to Tata Play), MTV Beats HD (available on Tata Play, Dish TV and Sun Direct) and VH1 HD (only on Tata Play and Sun Direct). Viewers of Airtel Digital TV, which boasts the second-largest subscriber base after Tata Play, and d2h have had to withstand the lack of these channels for more than five years now.

This is of special importance as Viacom18 prepares to launch its much-awaited sports channel Sports18 1 and its HD version on 15 April, as well as Sports18 Khel, for which it has bagged an all-important slot on DD Free Dish in the latest e-auction. The channels will boast of some of the biggest sporting events, including the FIFA World Cup that will take place in Qatar in November and December 2022, and pose stiff competition to break the duopoly that Star Sports and Sony Pictures Sports Network have largely enjoyed so far. If the new Sports18 channels are to gain the maximum possible brand recognition in a short time period, it is imperative that Viacom18 ensure that they are added on as many platforms as possible from day one — and the same goes for Colors Cineplex Superhits and its other channels.

Waiting for Tata play to add it